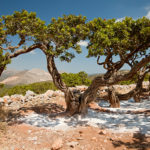 #Mastiha, or #Mastica, is a natural nutritional supplement known to possess #antioxidant and #anti-inflammatory properties.

Mastiha is known since antiquity for its therapeutic properties documented for the first time by the ancient Greek physicians #Hippocrates, #Dioscorides and #Galenos. Mastiha has been used by medical practitioners and botanists have used it for more than 2500 years mainly for the treatment of stomach and intestine disorders such as #gastralgia, #dyspepsia and #peptic #ulcer.

The European Medicines Agency has recognised Mastiha as a herbal medicinal product for the following indications, (a) mild dyspeptic disorders, and (b) symptomatic treatment of minor inflammations of the skin and as an aid in healing of minor wounds

A new clinical study, published in Pharmacological Research, has investigated whether a common route exists in the anti-inflammatory activity of Mastiha, specifically through the regulation of miRNA levels. The research team focused on two specific patient groups, those with inflammatory bowel disease (#IBD) and those with non-alcoholic fatty liver disease (#NAFLD), with Mastiha previously having been shown to provide beneficial effects in both diseases. The study showed the regulatory role for Mastiha in circulating levels of miR-155, a critical player in T helper-17 (#Th17) differentiation and function. Circulating levels of miR-155 were regulated by Mastiha administration for both IBD and NAFLD patients, diseases which share common pathophysiological features, suggesting this as the key mediator of Mastiha’s anti-inflammatory activities.