Why the Liver Will Be the Future of Your Practice 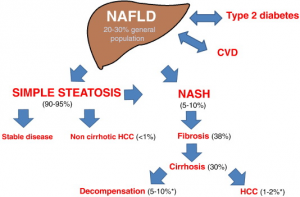 With Nonalcoholic Fatty Liver Disease on the Rise and No NHS-Approved Treatment, Nutrient and Botanical Therapies Are Poised as the Next-Best Solutions

As we move well into the 21st century, diseases related to a sedentary lifestyle and an overabundance of food are increasingly common. The rate of type 2 diabetes (T2D), a condition that was estimated to affect 120 million people worldwide in 2000,[1] has quadrupled in global incidence over the last three decades.[2] Diabetes and obesity are often accompanied by nonalcoholic fatty liver disease (NAFLD), a condition characterised by fat, in the form of triglycerides (TGs), accumulating in the liver.[3] Nonalcoholic steatohepatitis (NASH), a more severe form of NAFLD that also involves inflammation, was first described medically in 1952 and only identified as a disease in 1980.[4],[5] Nowadays, recent surveys have shown that about 30 to 40% of adults have NAFLD and 3 to 12% are affected by NASH.[6],[7] The numbers are shockingly high in those who are obese or affected by diabetes: 30 to 90% of individuals who are obese and 60 to 75% of individuals with T2D have NAFLD.[8],[9],[10]

Most Nutritional Therapists are comfortable in the concept and application of concentrated essential fatty acids especially fish oils as a means of altering abnormal inflammatory pathways in the body. Some EFA’s are perceived to be anti-inflammatory and others pro-inflammatory. Whilst the simplistic dichotomy of interpretation (Omega 3 Anti/Omega 6 Pro) has kept many a student content that they have mastered the art of complex fatty acid biochemistry – the reality is that cell membranes operate in a state of competitive inhibition with fatty acids of all carbon chain lengths and their role is highly sophisticated and complementary.

So…the paper out in the journal Cell this month (Sept 2010) from the lab of Prof. Olefsky at the University of California is a really exciting addition to the extensive research available – in that it elegantly describes a key anti-inflammatory mechanism using a G-protein coupled receptor.[1]

Teenage Boys Have Lower Incidence of Depression with EPA, DHA and Fish

A study published August 2010 in the Journal Pediatrics looked at a large cross-sectional study of Japanese teenagers and describes that a higher intake of fish, eicosapentaenoic acid (EPA), and docosahexaenoic acid (DHA) is independently associated with a lower prevalence of depressive symptoms in boys but not in girls.[1]

Now whilst it is generally felt that the role of fatty acids is vital in terms of brain health and function there is a scarcity of substantive epidemiological evidence to support direct benefits in terms of inhibiting depression.

Neurological/Dietary Control Over the Immune System – The Role of Fats

The immune system in humans and animal is complex, all the more so because it crosses over all tissues. The traditional view has been that the immune system keeps itself in check, and that is mostly the case. However, for some years there has been a development of a neural feedback loop comprehension that helps to answer some of the complex mechanisms and remarkably ties in the role of a nutritional strategy for immune management. This is known as the inflammatory reflex.

The inflammatory reflex, a prototypical neural circuit that modulates innate immunity, is activated by the presence of cytokines or other inflammatory products in tissues that triggers afferent (a nerve that passes impulses from receptors toward or to the central nervous system) action potentials travelling in the vagus nerve. The ascending information is relayed to brainstem nuclei that control efferent (nerves that convey nervous stimulus from the brain to other parts) neural signals in the form of action potentials transmitted back to the periphery via the vagus nerve.

Whilst this may sound complex – few subjects that combine neurology and immunology aren’t… the outcome suggested meets simple strategies, based on complex mechanisms.

Could a ‘Bacterial Thali’ Resolve Inflammation? – A Novel Strategy

There is substantive interest in the potential translation from bench to bedside of simple safe strategies to modify the adverse effects of inflammation. Approaching from a preventative and restorative angle the numbers of papers being published on the role of orally ingested bacteria (probiotics) and in this article – the herb Tumeric (active ingredient of which is curcumin) is presenting increasingly supportive evidence for their reasonable and safe clinical use.

Modern analytical techniques are helping to reveal novel opportunities for inflammation control in the gut and the systemic tissues in new ways that even a few years ago would have been thought of as very alternative!

Compared with our ancestors, Western societies today lead a lifestyle that is much more sedentary, probably as a result of cultural changes stemming from modern socio-economic morays. Taking into account differences in body size, our energy expenditure per kilogram of body weight has been estimated to be <40% of that of our prehistoric ancestors.[1] Current estimates suggest that 7 out of 10 adults are inactive or lack adequate conditioning,[2] and this lack of adequate exercise, combined with dietary indiscretion, has contributed to the worldwide epidemic of obesity and non-alcoholic fatty liver disease (NAFLD). NAFLD, is now considered to be around 20–30% prevalence in Western countries.

The questions concerning the benefits Vs risks of vaccination in light of the recent global approach to H1N1 (novel influenza) vaccine recommendations has thrown this area of medicine under a very bright spotlight. Leaving aside the question ‘to vaccinate or not’ a recent article has raised a simple and useful question. If I take a non steroidal pain killer (NSAID’s) to reduce post vaccine discomfort, or are ingesting them for other reasons does it affect my vaccine promoted immune response?