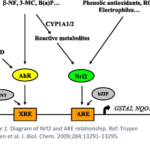 Nrf2 Inducers as an Approach to Addressing the Metabolic Syndrome?

If you’ve been too busy in clinic or with other activities that keep you from perusing research and following supplement industry trends, you may have missed the tremendous swing of interest to investigating the impact of Nrf2 and Nrf2-inducing substances on health. A simple search of the term Nrf2 in PubMed or other medical publication database will validate this; in 2007, there were 179 publications containing the term Nrf2 while in 2016 there were 1,447 – almost a 10-fold increase, and 2017 is well on track to be more than that with 1,063 already.

So just what is Nrf2, and the closely related antioxidant response element (ARE)?

Nrf2 is the more commonly used abbreviation for nuclear factor E2-related factor. It is the transcription factor that responds to oxidative stress by binding ARE, which is in the promoter region of genes encoding the transcription of antioxidant elements, detoxification enzymes, and proteins required for glutathione synthesis and recycling (see Figure 1).[i],[ii],[iii] This includes the phase II enzymes glutathione S-transferase (GST), glutathione reductase (GSR), glutathione peroxidase (GPX), and nicotinamide adenine dinucleotide phosphate (NADPH), a reducing agent.[iv],[v],[vi] Nrf2 is a very important element of this pathway as it controls both the inducible antioxidant-promoting response and gene expression mediated by the ARE.

In addition to the impact that the Nrf2/ARE pathway has on the expression of critical antioxidants and detoxification enzymes, we also have evidence that it impacts metabolic pathways. This includes energy metabolism, lipid synthesis, and glucose metabolism, even to the extent of reducing or preventing the development of the associated conditions of diabetes, obesity, and non-alcoholic fatty liver disease in animal models.[vii],[viii],[ix],[x] Nrf2 activation has been proposed as a mechanism for addressing diabetic nephropathy, thus it may have a multiplicity of benefits in these often overlapping conditions.[xi]

The Nrf2/ARE pathway is activated by elevated levels of reactive oxygen species (ROS) and electrophilic species and/or a reduced antioxidant capacity. Many common elements we are exposed to in the environment such as particulate matter associated with air pollution and heavy metals also activate the Nrf2/ARE pathway.[xii],[xiii] Unfortunately some of the toxic substances which we are exposed to such as ochratoxin A, one of the most common mycotoxins found in foods and water damaged houses, act as Nrf2 inhibitors.[xiv] Additionally, indoxyl sulfate, a uremic toxin that is increased in the blood with exposure to toxic heavy metals such as cadmium and in chronic kidney disease due to gut microbiota production, also acts as an Nrf2 inhibitor, further contributing to accelerated renal damage at the level of the tubules.[xv],[xvi],[xvii]

Although Nrf2 is maintained at a steady state level, it is constantly degraded in cells not experiencing stress.[xviii] In cell cultures, Nrf2 has been shown to experience rapid degradation with a half-life of approximately 15 minutes,[xix] suggesting that in order to effectively increase its expression a sustained level of inducing substances, or stress, is necessary. Studies have also shown that the ability to upregulate Nrf2 declines with age.[xx] Fortunately, we are aware of many natural substances and health-promoting practices which have evidence of inducing Nrf2 and thus our detoxification pathways and antioxidant defenses. This includes relaxation and breathing techniques,[xxi] regular or longer periods of exercise,[xxii],[xxiii] and substances we find in items we consume like cruciferous vegetables (sulforaphane and 3,3′-diindolylmethane or DIM), tomatoes (lycopene) and green tea (epigallocatechin gallate, or EGCG).[xxiv],[xxv] Although for healthy individuals without excessive toxin exposures these day-to-day activities or dietary habits may be adequate, many individuals which seek out holistic care are in a position where they often need additional support.

Sulforaphane is one of the Nrf2 inducing substances for which we have evidence on both a mechanistic and clinical level of these benefits. In a recent study, sulforaphane was found to significantly reduce fasting blood glucose and glycated hemoglobin (HbA1c) in obese patients with poorly managed type 2 diabetes.[xxvi] In the parallel animal model, sulforaphane was found to attenuate glucose production and glucose intolerance at a level similar to metformin. Cell cultures showed that one of the potential mechanisms was indeed related to Nrf2 induction, as there was a dose dependent effect of sulforaphane on nuclear translocation of Nrf2, and silencing of Nrf2 lead to 2.3-fold increase in glucose production as well as an attenuation of the effect of sulforaphane. Metformin, one of the most common medications prescribed in diabetes, has a potential risk of causing kidney damage, which already is of concern for individuals with diabetes. Sulforaphane, as an Nrf2 promoting substance, has the potential to benefit the kidneys for this reason as previously discussed.

Other related studies looking at sulforaphane and its effect on the metabolic syndrome have demonstrated similar benefits. Dietary supplementation of broccoli sprout extract (BSE) containing glucoraphanin, a sulforaphane precursor, was found to significantly reduce the liver function markers alanine aminotransferase (ALT) and gamma-glutamyl transpeptidase (GGT) as well as an oxidative stress marker in patients with fatty liver disease.[xxvii] In a parallel animal model, supplementation with the BSE was found to prevent toxin induced liver damage, in part by inducing hepatic phase 2 antioxidant enzymes including hepatic GST, which the Nrf2/ARE pathway is known to promote.

[xiv] Limonciel A, Jennings P. A review of the evidence that ochratoxin A is an Nrf2 inhibitor: implications for nephrotoxicity and renal carcinogenicity. Toxins (Basel). 2014 Jan 20;6(1):371-9. View Full Paper