Naming the organism Lactobacillus GG, after the first initials of their last names, Goldin reports that the organism was unique in the “white, almost milky creamy colonies it would form, probably because of a polysaccharide in the cell wall.” LGG continues to be studied around the world—from Florida to China, Korea to Germany, Finland to Australia, Boston to Italy. In the last two years alone researchers have uncovered new benefits of this probiotic strain far beyond digestive health, as well as deciphering the mechanisms by which this hardy organism inhibits pathogens and their toxins, and helps restore and re-set immune function. Like the Vitamin C of probiotics, Lactobacillus GG is both the most researched and most trusted, safe, effective immune-boosting probiotic we know of.

In 1987, Goldin, Gorbach and their colleague Chang published a study in The Lancet entitled “Successful treatment of relapsing Clostridium difficile colitis with Lactobacillus GG.” Chang, a virologist at Tufts who had recently isolated the infamously destructive toxin of C. difficile—the bacteria that causes a devastating and often recurrent diarrhea—gave the super probiotic strain to suffering patients after a course of antibiotics, and relapses were prevented.

That study was the first proof that this unique organism could benefit human health. The work on this unique immunobiotic and E. coli continues, and in 2008 a study of a strain of E. coli that triggers acute diarrhea, gut hemorrhages and hemolytic uremia, found that the probiotic prevents E. coli from causing destructive changes to tissue. The study showed that pretreatment with LGG diminished the number of lesions and reduced the permeability of the gut mucosal cells. Only the live organism worked; heat-inactivated organisms were not effective. 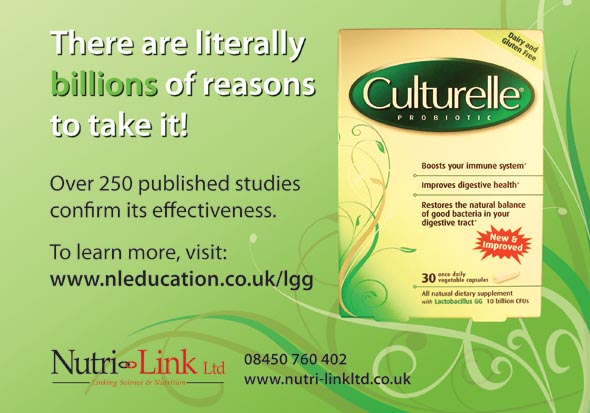 LGG has also proven effective in combating many other troubling gut pathogens. This probiotic inhibits Clostridium, Bacteroides, Pseudomonas, Staphylococcus, Streptococcus and Entereobacteria—yet does not inhibit other beneficial Lactobacilli.

A 2008 study of 559 children showed that this strain of Lactobacillus significantly lowered the frequency and duration of acute infectious diarrhea, as well as the requirement for intravenous therapy and hospital stays. A 2009 Taiwan study found that the organism inhibits the shedding of rotavirus in fecal samples from infected children.

Adults with gut infections fare well with LGG also. LGG proved effective in five meta-analyses of probiotic trials analysed at Tufts-New England Medical Medical Center in 2008; the largest analysis looked at 2810 subjects in 25 randomised, controlled trials. Tufts researchers found that this particular strain of Lactobacillus—as well as Saccharomyces boulardii—helped prevent antibiotic-associated diarrhea. And a 2007 study from Poland looked at eight randomised, controlled trials involving nearly 1000 individuals. LGG was associated with a significant reduction in the duration of diarrhea. In addition this probiotic reduced diarrhea associated with chemotherapy for colorectal cancer, according to a 2007 study from Helsinki University Department of Oncology.

Lactobacillus rhamnosus heals more than the gut in infants and young children. It helps prevent eczema. When pregnant mothers take LGG, their newborns have less eczema. LGG can reduce atopic dermatitis in those newborns, as well as reduce the risk of allergy by half when given to expectant mothers and then to infants in their first six months of life. A 2009 study from Germany found that newborns treated with LGG had half the rate of atopic dermatitis.

This remarkable immunobiotic can also help prevent ear infections in infants. A 2008 Finnish study of infants requiring formula before the age of 2 months were given LGG and Bidifobacterium, or placebo, daily until they were a year old. During the first seven months, 22% of infants receiving probiotics had an ear infection compared to 50% receiving placebo. Antibiotics were prescribed for 31% of infants on probiotics and double that—60%—on placebo. The researchers conclude that LGG and Bifidobacterium “offer a safe means of reducing the risk of early acute otitis media and antibiotic use…during the first year of life.”

Lactobacillus rhamnosus may be able to prevent strep throat. A fascinating 2009 study from Italy found that the invasive capacity of eight strains of group A Streptococci (GAS)—all resistant to Erythromycin—was significantly inhibited by LGG, both live and heat-killed. The researchers studied human respiratory cells and concluded that the probiotic might be able to prevent strep throat infections. It has also cleared nasal passages in guinea pigs with allergic rhinitis.

Lactobacillus rhamnosus reduces arthritis— perhaps because allergic disorders involve perturbed skin and gut mucosa and dysregulation of the immune response, according to researchers at Finland’s University of Turku. In a 2008 report they show that elimination diets and environmental changes are not effective enough in allergy, and perhaps establishing a healthy gut microbiota is equally important.

This Lactobacillus strain, taken orally, along with other probiotics, actually reduces the amount of Staphylococcus aureus and beta-hemolytic streptococci in the nasal passages of humans. Yet the probiotics themselves do not colonise the nose. That suggests that LGG truly does have a body-wide immune-boosting effect.

Lactobacillus GG denatures toxins, decreases the inflammatory response, and produces peptides that balance the immune response while limiting the destructive potential of many pathogens.

Lactobacillus rhamnosus can help a liver damaged by alcohol. Only 30% of alcoholics develop alcoholic liver disease, and research suggests that bacterial endotoxins may be another key factor. In a 2009 study from Rush University Medical Center, animals fed alcohol plus this particular probiotic had significantly less severe liver damage (alcoholic steatohepatitis) than those fed alcohol alone. The probiotic “reduced alcohol induced gut leakiness and significantly blunted alcohol-induced oxidative stress and inflammation in both intestines and the liver” the researchers conclude.

Though these results are impressive, a deeper look at how this remarkable immunobiotic—with its antimicrobial and super adhesion ability—works its mucosal magic gives us profound insight into its other, body-wide health benefits. This immunobiotic denatures toxins, decreases the inflammatory response, and produces peptides that balance the immune response while limiting the destructive potential of many pathogens.

How Does Lactobacillus rhamnosus Work?

Lactobacillus rhamnosus has remarkable effects on inflammation and infection. Research shows that it is able to significantly blunt the amounts of inflammatory cytokines that pathogenic bacteria seem to trigger—such as TNF-alpha, interleukins, and myeloperoxidase. Remarkably, it downregulates inflammation not only in the gut, but in the intestine, liver, lung and blood. It also seems to reduce the invasive capacity of bacteria. As a result, it can be highly beneficial in a variety of inflammatory diseases and infections.

Lactobacillus rhamnosus even seems to be able to remove toxins from solution. A 2008 study of this particular strain of Lactobacillus along with other probiotics looked at the peptide toxins from cyanobacteria. LGG and Bifido bacterium strains were studied. This unique probiotic was able to remove between 60 and 78 percent of three specific toxins. Toxins could be removed simultaneously by the probiotic, and researchers found that a combination of probiotics enhanced their removal ability. This fascinating study suggests that one mechanism by which Lactobacillus rhamnosus heals the gut and the immune system is by actually binding or denaturing bacterial toxins.

Pathogens harm by invading tissue, releasing endotoxins, and stimulating a marked immune response which releases a flood of inflammatory molecules. Immunobiotics limit a pathogen’s ability to invade as well as damage our own cells, and they help reduce our inflammatory response, leading to an overall balance that is far healthier. There is much new evidence that this probiotic is a very effective immunobiotic, one that helps regulate our own immune response.

A 2009 animal study found that this unique organism is able to lessen the damaging response of T and B cells to the pathogen Campylobacter jejuni in mice. Another 2008 study found that it can actually restore the liver enzyme alkaline phosphatase in cells damaged by the potent mycotoxin deoxynivalenol.

Lactobacillus rhamnosus helps limit the runaway inflammatory response in our body. NF-Kappa B is a key molecule that regulates the entire inflammatory cascade. Amazingly, Lactobacillus rhamnosus seems to be able to quiet the gene that transcribes and regulates production of NF-Kappa B. This remarkable finding is from a 2008 study from South Korea. Cells in culture were stimulated so that they would release the inflammatory cytokine IL-8. Pretreatment of cells with this immunobiotic significantly inhibited IL-8 production. Even more importantly, the organism actually worked to quiet both the genes that help regulate IL-8 and NF-Kappa B. This means that Lactobacillus rhamnosus may be working at the very deep and fundamental level of gene activity and transcription, in part by inhibiting the NF-Kappa B signaling pathway.

Lactobacillus rhamnosus may help our gut mucosa defend itself by promoting protective responses, according to a 2008 study from Emory University. This research found that Lactobacillus rhamnosus reduced cell death in vitro and when given to live animals. The scientists used DNA microarray analysis to prove the protective effects on cells. This kind of cell death may be a precursor to a potentially deadly condition seen in premature infants, where part of the bowel dies, and sometimes the infant dies as well.

Lactobacillus rhamnosus may augment first-line defense secretory IgA responses. SIgA is a first line of defense for all mucosa in the body. A 2008 study on birch pollen allergy from Finland looked at the oral immune response in individuals with birch pollen allergy. Thirty-eight individuals received either Lactobacillus rhamnosus or placebo for 10 weeks before birch pollen season. SIgA in saliva was measured before, during, and after the pollen season and those who took LGG had increased SIgA levels.

Lactobacillus rhamnosus proteins heal the gut lining. Two proteins produced by LGG promote “epithelial integrity”, according to a 2008 study from the University of Tennessee. Researchers looked at two unique Lactobacillus proteins, p40 and p75, and found that treating cells with these proteins helped prevent oxidative damage and permeability.

Lactobacillus rhamnosus and other immunobiotics may activate specific T-cells (“Peyer’s patch”) according to a review by Robert Clancy of Royal Newcastle Hospital in Australia. This may be how oral consumption of this immunobiotic helps protect against infection and inflammation as far away as the nose, ears, skin, lung or urinary tract. Specific IgE is reduced when consuming immunobiotics, and animal studies have shown protection against bronchial infection with H. influenza and Candida. As Clancy concludes “to continue to use the term ‘probiotic’ for those bacteria which promote health…would appear outmoded and out of step with contemporary thinking and potentially confusing.”

It Actively Restores Immune Balance
Lactobacillus rhamnosus, with its antimicrobial and immune-regulating ability, along with its extremely sticky, adhesive properties, offers an entirely new therapeutic strategy for combating allergic and infectious disease. Our gut microbiota have a powerful ability to prime immune regulation. From the moment we’re born, our immune system is regulated by our flora—which in turn is influenced by everything from our mothers’ microbiota, the mode of delivery (vaginal, which colonizes the baby with Lactobacilli; or caesarean, which does not), whether we are breast or bottle fed, and our diet and environment. Diet directly influences the diversity of the microbiota. Host-microbe cross talk is key to maintaining immune tolerance and effectiveness.