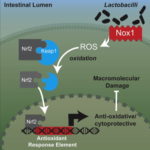 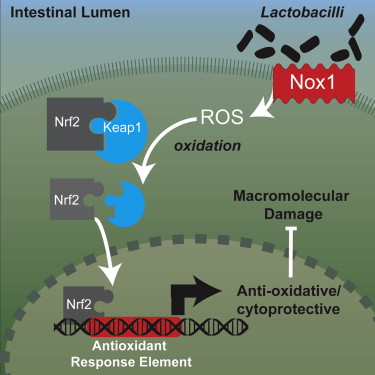 The idea that bacteria in the gut may have many twists in their skill set to enhance human health has been around for a while. That they may have the capability of inducing a cytoprotective enzyme called Nrf2 in local tissues, which in turn promotes the production of glutathione, detoxification and numerous other health supportive elements has until recently been less well understood.[1]

Nrf2 activation upregulates a regulon of genes including those involved in xenobiotic and reactive oxygen species (ROS) detoxification, as well as pro-restitutive function. This pathway has attracted considerable attention because small molecule inducers of Nrf2 have cytoprotective effects against oxidant and electrophilic environmental stressors.[2],[3]

I have previously discussed this cytoprotective switch as the use of nutrient concentrates to induce a mild oxidative stress to this defence molecule results in a positive secondary response, and may account for some of the human health benefits derived from a traditional Mediterranean and Okinawan diet.[4]

The paper by Jones and colleagues published in Cell Reports explore this cytoprotective mechanism through their investigation in the role of lactic acid bacteria in the gut. Using Lactobacillus GG a very well-studied human species of bacteria in a mouse model demonstrated clear up regulation of key cytochrome P450 enzymes and so aid local cell detoxification via mutual interactions and help explain the role of this probiotic in assisting in the reduction of radiation damage in the gut.[5]

The researcher state: Thus, members of the genus lactobacilli may have evolved symbiotic relationships where microbial-induced generation of ROS functions as a transducer of bacterial signals into host gene regulatory events that potentiate multiple effects in disparate biological systems. We describe a molecular mechanism by which lactobacilli can elicit their beneficial influences on host gut tissues, wherein ROS generated by Nox following bacterial contact activates downstream cytoprotective signalling.

They also note that effects appear to be species an strain specific, and whilst the paper does not explore human cell responses the implication is that the use of a single strain of probiotic may need to be looked at beyond immune and metabolic interactions and include cytoprotective induction, and if this is the case it helps to explain why benefits of bacterial ingestion have evolved with humans over millennia to assist with multiple health benefits and risk management.

Taken together, these observations are consistent with the concept of “hormesis,” wherein low, near threshold levels of a stressor is protective against more intense or prolonged stimuli. Making the statement “that which does not kill you makes you stronger” by Friedrich Nietzsche even relevant at a molecular and bacterial level.