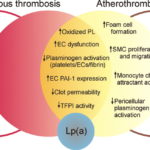 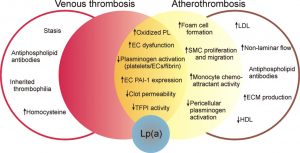 A review article by Dr Carrie Decker ND. Anyone who has ever listened to their own heart with a stethoscope has likely found the lub-dub pattern reassuring, whether they are a doctor or not. The rhythmic regularity of the heart beat at rest can lull us into meditation, much like it helps an infant go to sleep, while the intense beating after exercise further spurs our energy like a beating drum. Our awareness of this internal rhythm often evades us, unless under a high level of exertion, or if an irregular beat sneaks through. Cardiovascular health for many only becomes a concern with age, unless familial factors or birth defects draw it to our attention earlier.

As we learn more from the information obtained with genetic assessment, we further understand these markers of risk, and more importantly, how to make use of them as well. Elevated lipoprotein(a) levels are associated with coronary heart disease, stroke,[vii] and peripheral vascular disease,[viii] and are primarily dependent on genetics.[ix] And elevations of this protein are not uncommon, with one in five Americans having levels that put them at risk, approximately tripling the likelihood of having a heart attack or stroke at a young age.[x] Even the New York Times recently delved into discussion of this often unchecked risk marker, highlighting the story of Bob Harper, co-host of the hit show “The Biggest Loser,” who was found to have elevated levels of this protein after suffering a massive heart attack at the age of 52.

Despite the genetic predisposition for elevated lipoprotein(a), levels of this protein still can be impacted by natural supplement therapies. Coenzyme Q10, commonly known as CoQ10, is an antioxidant well known for its cardiovascular health supporting benefits. CoQ10 significantly reduces serum levels of lipoprotein(a), with reductions of 31% compared to 8.2% with placebo in one randomized double-blind placebo controlled trial.[xi] CoQ10 has been shown in meta-analysis to improve endothelial function,[xii] and in other studies to reduce LDL oxidation,[xiii] as well as systolic and diastolic blood pressure in patients with diabetes.[xiv] With the use of statin medications, which inhibit an enzyme known as HMG-CoA reductase, it is very important to include CoQ10 as a supplemental therapy as this enzyme is also necessary for production of CoQ10.[xv] Reductions of CoQ10 levels with statin therapies have been shown to be approximately 40%.[xvi] Although this only may contribute to symptomatic myopathy in a small fraction of this population, it is a dramatic decrease which may impact health long-term in many ways.

Tocotrienols are the lesser studied fraction of the naturally occurring vitamin E isoforms, with tocopherols, which are commonly found in nature, dominating scientific research.[xvii] However, tocotrienols are potent antioxidants, quoted in some research as having 40 – 60 times the antioxidant potential of tocopherols, and with this they bring a variety of benefits particularly where cardiovascular health is concerned.[xviii] In addition to helping reduce lipoprotein(a) levels,[xix] tocotrienols have been shown to improve total cholesterol and its fractions, reduce low-density lipoprotein (LDL) oxidation, and improve arterial compliance, that is, the ability of arterial walls to be flexible which directly impacts blood pressure.[xx]

One of the reasons elevated lipoprotein(a) levels may be associated with an increase risk of cardiovascular disease is through its relationship with fibrinogen,[xxi] the glycoprotein in the blood that is converted by thrombin into fibrin, forming a clot in the setting of vascular injury. Nattokinase and lumbrokinase are two potent fibrinolytic enzymes which are used for supporting a healthy balance of circulation and coagulation, and help to address this issue. Both can be useful to help decrease fibrinogen and disintegrate clots by breaking down fibrin, promoting healthy blood flow in not only arteries but also the small capillaries.[xxii],[xxiii] This not only can be helpful for reducing risk of a clot or dissolving an existing one, but also for supporting healthy circulation in any condition in which the other critical elements of Virchow’s triad are compromised.[xxiv] Parameters associated with bleeding should be monitored during nattokinase and lumbrokinase use.

Dr. Decker is a certified Naturopathic Doctor, graduating with honors from the National College of Natural Medicine (now the National University of Natural Medicine) in Portland, Oregon. Prior to becoming a naturopathic physician, Dr. Decker was an engineer, with graduate degrees in biomedical engineering as well as mechanical engineering from the University of Wisconsin-Madison and University of Illinois at Urbana-Champaign. Having had her own experience of healing from chronic disease conditions with the support of naturopathic medicine, she chose to pursue a career in this healing realm so she could help others as well. Dr. Decker sees patients at her office in Portland, OR, as well as remotely, with a focus on gastrointestinal and liver disease, allergies, mood imbalances, eating disorders, autoimmune disease, chronic fatigue, thyroid dysfunction, women’s health, and skin conditions.

Previous Post
Nrf2 Inducers as an Approach to Addressing the Metabolic Syndrome?
Next Post
New Studies Confirm the Power of Three Chinese Herbs for Asthma