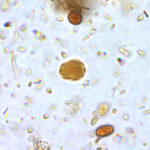 Despite years of study, the pathogenic role of Blastocytis hominis is still regarded by some as controversial. It is thought that establishing relevant genotypic differences between the asymptomatic and symptomatic isolates should assist in determining the pathogenicity of Blastocystis by clearly assigning symptoms to genotype.

This genetic investigation is not undertaken by standard pathology labs. If it was more readily available, B.hominis spp subtypes, known to be of ‘nil’ pathogenicity could be either ignored or treated prospectively. Patients who in the past have been treated and shown benefit on elimination of B.hominis most likely were infected with the species that met the genetic requirements for pathogenic response, and those treated but post eradication had no improvement may have had other confounding pathogens or underlying health problems.

Further clarification of this ubiquitous organism can be found in the excellent free review by Kevin Tan: Clinical Microbiology Reviews; published in Oct. 2008.[2]

The image below is extracted from the article and simplifies a model for pathogenesis of Blastocystis spp. It shows how Blastocystis infection may result in a variety of pathological outcomes such as secretory IgA degradation, barrier function compromise, host cell apoptosis, and induction of proinflammatory cytokines.

SIgA degradation and barrier disruption may promote the growth and invasion of local gastrointestinal pathogens or the expansion of commensal organisms, that by virtue of their different ratio become problematic. This can explain the apparent dysbiosis found in patients with B.hominis confirmed. The degradation of SIgA also contributes to loss of bacterial balance and will reduce the competence of regulatory T Cells (Treg) production which in turn may increase the risk of proinflammatory related para-inflammation local to the gut and systemically.

Clinical features of illness that have been attributed to Blastocystis spp. are nonspecific and include nausea, anorexia, abdominal pain, bloating, flatulence, and acute or chronic diarrhoea. Of these features, the most commonly recorded symptoms among patients are abdominal pain and diarrhoea.[3] Symptoms can be variable, ranging from mild diarrheal illness[4] and chronic diarrhoea[5] to acute gastroenteritis.[6]

One study has described an association between infection density and allergic cutaneous diseases. In a study of Blastocystis-positive patients from a Turkish hospital, the criteria for selection were the absence of any other co-infecting pathogens and the presence of more than five parasites per high-power field. The symptoms from this group were abdominal pain (76.9%), diarrhoea (50%), distension (32.6%), and urticaria (5.7%), suggesting an association between parasite density and pathology.[7] Other signs and symptoms associated with Blastocystis infections include faecal leukocytes, eosinophilia, and cutaneous rashes, particularly urticaria.[8],[9],[10]

Accumulating reports also suggest an association between Blastocystis and irritable bowel syndrome (IBS), a functional bowel disorder in which abdominal pain is associated with a defect or a change in bowel habits.[11] In two studies[12],[13]Blastocystis was detected more frequently in IBS patients than in a control group consisting of IBS-negative patients with gastrointestinal symptoms.

This is a more controversial area, as the use of Metronizadole (Flagyl) is often the first recommended intervention but can be ineffective. The cyst form has been shown to be resistant (up to 5 mg/ml) to the cytotoxic effect of the drug.

Those observations, together with the extensive genetic heterogeneity of the organism, may offer explanations for the variability in drug susceptibilities and treatment failures. A summary list of drug interventions may be found in the Tan article.

Studies to investigate the usefulness of cotrimoxazole in Blastocystis infections and Nitazoxanide, a 5-nitrothiazole broad-spectrum antiparasitic agent, have been reported to be effective against Blastocystis.

Iodoquinol has been suggested to be a suitable eradicator of this organsim. Metronidazole, iodoquinol, or co-trimoxazole has been reported to be effective in Blastocystis infections, but metronidazole resistance may be common.

Treatment may not be required if the B.hominis is not of the pathogenic type, other agents may be causing the symptoms. The use of medications may be judged by the severity of the symptoms and prior use. The long term success of eradication will depend on the successful restoration of mucosal immune function and the continued non exposure to repeat infection.