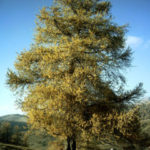 A Review of Larch Arabinogalactans

Antony Haynes explores the potential mechanisms and actions of arabinogalactans, specifically from the Larch tree.

The reason for choosing this topic is due to the clinical improvements that have been witnessed from its use by numerous patients of my own and of other practitioners.

Larch arabinogalactans will be referred to as “L.A.”.

L.A.  is  a  polysaccharide  powder derived  from  the  wood  of  the  larch  tree (Larix species) and comprised of approximately 98 percent arabinogalactan. Arabinogalactans are found in a variety of plants but are more abundant in the Larix genus, primarily Larix occidentalis (Western Larch). The Western Larch is unique among pines in that it loses its needles in the fall. The Western Larch is also known by the names of Mountain Larch or Western Tamarack and is native to the Pacific and Inland North-west United States as well as parts of British Columbia, Canada[i].

Pharmaceutical-grade larch arabinogalactan is a fine, dry, off-white powder with a slightly sweet taste and mild pine-like odour. It dissolves completely in water or juice, is low in viscosity and therefore easy to administer, even to children. It is composed of galactose and arabinose molecules in a 6:1 ratio, with a small amount of glucuronic acid. Arabinogalactans are long, densely branched polysaccharides of varying molecular weights (10,000-120,000).  Lower molecular weight polysaccharides typically exhibit an anti-inflammatory, anti-complement, anti-allergy effect, while those of higher weights stimulate natural killer (NK) cell cytotoxicity and reticuloendothelial cells. In the case of larch arabinogalactan, molecular weights of the two major fractions are 16,000 and 100,000, perhaps accounting for its wide range of therapeutic properties[ii].

L.A. is approved by the U.S. Food and Drug Administration (FDA) as a source of dietary fibre, but also has potential therapeutic benefits as an immune stimulating agent and cancer protocol adjunct.

Human studies on the pharmacokinetics of L.A. are scarce and the amount absorbed following an oral dose remains unclear. Animal studies indicate that intravenous injection of purified larch arabinogalactan results in 52.5% of the dose being present in the liver and 30% in the urine 90 minutes after dosing. Hepatic clearance occurred with a half-life of 3.42 days[iii].

Non-absorbed L.A. is actively fermented by intestinal microflora and is particularly effective at increasing beneficial anaerobes such as Bifidobacteria and Lactobacillus[iv].

L.A. is an excellent source of dietary fibre that is able to increase short-chain fatty acid production (primarily butyrate) via its vigorous fermentation by intestinal microfloraii.

It is well documented that butyrate is essential for proper colon health as it is the preferred substrate for energy generation by colonic epithelial cells[v]. Butyrate also acts as a protectant for the intestinal mucosa against disease and cancer-promoting agents[vi].

L.A. added to human faecal homogenates has also been shown to decrease ammonia generation, and therefore may be of clinical value in the treatment of portal-systemic encephalopathy, a disease characterised by ammonia build-up in the liveriv.

L.A. given to human subjects increased levels of beneficial intestinal anaerobes, particularly Bifidobacterium longum, via their fermentation specificity for arabinogalactan compared to other complex carbohydrates[vii].

L.A. may be an effective adjunct to cancer therapies due to its ability to stimulate NK cell cytotoxicity, stimulate the immune system, and block metastasis of tumour cells to the liverii.

Pretreatment with L.A. was found to stimulate NK cell cytotoxicity via potentiation of the cytokine network, primarily via an increase in the release of gamma interferon[xi].

Recurrent otitis media is common in paediatric populations and it appears that improving immune system function might lead to a decrease in both frequency and severity of this condition. Research has demonstrated larch and other arabinogalactans to be capable of  enhancing the immune response to bacterial infection via stimulation of phagocytosis, competitive binding of bacterial fimbriae, or bacterial opsonization. This was found to be particularly true for infection by gram negative organisms such as Escherichia coli and Klebsiella speciesii,[xii].

In addition, D’Adamo reports a decrease in  occurrence  and  severity  of  otitis  media  in  paediatric  patients  supplemented  prophylactically  with larch arabinogalactanii.

L.A.’s mild taste and excellent solubility in water and juice make it a relatively easy therapeutic tool to employ in paediatric populations.

In cell and animal models, L.A. is capable of enhancing natural killer cells and macrophages as well as the secretion of pro-inflammatory cytokines. In a human clinical study, it was demonstrated that L.A. increased the body’s potential to defend against common cold infection. L.A. decreased the incidence of cold episodes by 23 %.

These observations suggest a role for L.A. in the improvement of cold infections, although the mode of action remains to be further explored. Different hypotheses can be envisaged as L.A. can possibly act indirectly through microbiota-dependent mechanisms and/or have a direct effect on the immune system via the gut-associated lymphoid tissue (GALT)[xiii].

Stimulation  of  NK  cell  activity  by  L.A. has  been  associated  with  recovery in certain cases of chronic fatigue syndrome[xix]. Viral hepatitis (hepatitis B and C) is also characterised by a decrease in NK cell cytotoxicityxiv, xv and therefore these patients may benefit from its stimulation by L.A.. In the case of multiple sclerosis, a small 2-year study of patients with the relapsing/remitting type concluded that disease severity was correlated with NK cell functional activity, supporting the hypothesis that NK cells play a role in the immunopathogenesis of this diseasexvii.

Consequently, stimulation of NK cell cytotoxicity might be of clinical benefit to these patients. Patients with HIV/AIDS develop low CD4 cell counts and often are plagued by opportunistic infections.

By virtue of its immune-stimulating properties, L.A. has been shown to effect a slight increase in CD4 cell counts, in addition to decreasing susceptibility to opportunistic pathogensii.

L.A. is a safe and effective immune-stimulating phytochemical. It is FDA-approved for use as a dietary fibre and in food applications. Both acute and long-term toxicity studies in rats and mice reveal no evidence of toxicity[xx].

Human consumption is usually without side-effects; however, a small percentage of people (<3%) experienced bloating and flatulence, possibly due to the vigorous fermentation of the arabinogalactan by intestinal microfloraii.

Due to its excellent safety profile and solubility in water and juice, L.A. is considered a safe, effective immune-supportive agent for paediatric use.

L.A. has been shown to support immune function, SCFA levels, to act as a prebiotic for gut bacteria particularly Bifidobacteria, and may be of potential benefit in those with CFS, hepatitis, and auto-immune conditions, as well as in paediatric otitis media.

Previous Post
Glutalytic: Enzymatic Support for Gluten Breakdown that Minimises Exposure to Immunogenic Peptides
Next Post
Thymic stromal lymphopoetin (TSLP), the long and short of it