Thymic stromal lymphopoetin (TSLP), the long and short of it 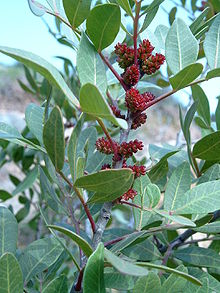 Dr Carrie Decker ND, explores the relationship between a molecular communication chemical and human health, its remediation and the role of natural agents in the facilitation of this, with a particular emphasis on the emerging potential of Mastic (Greek: Μαστίχα) a resin obtained from the mastic tree (Pistacia lentiscus).

Thymic stromal lymphopoetin (TSLP) is cytokine of importance in the realm of inflammation and immunoregulation, yet is less often discussed than the more well-known interleukins, interferons, and tumor necrosis factors. TSLP was first discovered in 1994 as a protein secreted from thymic stromal cell lines, and found to support B-cell differentiation and growth.[1] Only very recently in 2015 was there found to be a short form (sfTSLP) and a long form (lfTSLP), which have very opposite effects.[2],[3] The lfTSLP is proinflammatory, activates mast cells, DCs, and T cells, and is only expressed during inflammation.[4] The sfTSLP is expressed during steady-state conditions, downregulated with inflammation, and inhibits cytokine secretion of DCs.  Both forms can be produced by epithelial and dendritic cells (DCs), and are expressed by the tissues of the skin, oral mucosa, salivary glands, and intestine. They also both have antimicrobial activity, with sfTSLP having a stronger effect.[5] Research up until the discovery of the different short and long forms in 2015 has focused on the long form, which herein will simply be referred to as TSLP to be in agreement with published research unless the short form or long form is specified.

In vivo, lfTSLP is upregulated in conditions such as atopic dermatitis, asthma, ulcerative colitis, while it is absent in healthy tissues. These inflammatory conditions appear to have the opposite effect on sfTSLP, which has been shown to be downregulated locally as observed in biopsies of tissue from individuals with atopic dermatitis and Crohn’s disease.[6] Low levels of both TSLP isoforms have also been observed in individuals with untreated or refractory coeliac disease in comparison to treated coeliac disease and controls, which may be a consequence of enterocyte loss, or increased production of a protein which degrades TSLP.[7] Environmental factors such as viruses, microbes, helminths, allergen sources, diesel exhaust, cigarette smoke, and chemicals trigger lfTSLP production.[8] lfTSLP has been shown experimentally to be induced by inflammatory Th2 cytokines such as IL-13 and IL-4 in bronchial epithelial cells and nasal mucosa, and also induced by rhinovirus infection.[9],[10] lfTSLP is upregulated in the intestinal epithelial cell line Caco-2 by challenge with Salmonella typhimurium, while vitamin D3 activates promotor regions and induces sfTSLP transcription. TSLP is overexpressed in esophageal biopsies from individuals with eosinophilic esophagitis, and chicken egg ovalbumin has been observed to induce TSLP secretion.[11]

The induction of lfTSLP with infection and antigen exposure further sheds light on how these mediators can worsen symptoms associated with a chronic inflammatory state such as asthma, allergies, or inflammatory bowel disease. Because lfTSLP further activates mast cells, DCs, and T cells, and is further increased by some of the cytokines they secrete, one can understand how this would worsen an already inflammatory state. Strategies of reducing lfTSLP or blocking its receptor have been investigated as a means for reducing an allergic or asthmatic state.[12],[13] Additionally, as sfTSLP has been shown to be low in disease states, and treatment with sfTSLP has been shown to have a protective effect in animal models,[14] this also may be utilised to mediate inflammatory conditions.

TSLP in breast milk and relationship with allergies

TSLP is present in breast milk, and has been shown to be much higher in the initial days after birth than at 11 – 26 days postpartum.[15]  Studies have investigated its impact on conditions such as allergies and asthma in paediatrics. A population study investigating relationships between residential areas, diet, and amount of TSLP in colostrum showed that TSLP levels were significantly higher (levels of magnitude) in women from Japan than Nepal, and that higher levels were associated with milk consumption during pregnancy, and lower levels were associated with yogurt consumption.[16] TSLP induces a Th2 response, and also is increased by Th2 related cytokines. The Nepalese have a very low incidence of allergies compared to individuals in Japan. These findings support the “hygiene hypothesis” of allergy, as high levels of sanitation such as in Japan are associated with lower exposure to infectious pathogens, and therefore a lower Th1 relative to Th2 response.

Impact of natural agents on TSLP

Glucocorticoids reduce the proinflammatory TSLP expression, much as they would be expected to. Other things which have been shown to inhibit TSLP include selenium,[17] berberine,[18] grapefruit juice,[19] and green tea extract.[20] Some agents which suppress the Th2 response or overall inflammation also act to reduce TSLP.  This includes the probiotic Lactobacillus rhamnosus and curcumin.[21],[22] Low-dose light-emitting diode (LED) therapy applied via a water bath to the lesions of atopic dermatitis in mice has been shown improve lesions in conjunction with reducing the infiltration of inflammatory cells and levels of TSLP, total IgE, nitric oxide, and histamine.[23] As was mentioned, vitamin D3 has been shown to increase the anti-inflammatory sfTSLP expression in keratinocytes, which may be one mechanism by which vitamin D can improve symptoms of atopic dermatitis.

Mastic gum has a long history of use for its antioxidant, anti-inflammatory, and antimicrobial effects, including bactericidal action against Helicobacter pylori.[24],[25] Interestingly, mastic gum has been shown to have positive impact on Crohn’s disease, however the potential involvement of TSLP was not investigated in this study.[26] Mastic gum has also been shown to reduce eosinophilia, airway hyper-responsiveness, and production of proinflammatory cytokines in a mouse model of asthma.[27] The impact of mastic gum on the secretion of TSLP in the asthmatic airway has been recently investigated.[28] In normal human bronchial cells cultured with IL-4 and IL-13, the presence of mastic gum was found to reduce mRNA expression of TSLP when subject to viral stimulation of the innate inflammatory response. Mastic gum was also observed to reduce bronchial expression of TSLP and interleukin (IL)-8 (promotor of neutrophil recruitment and degranulation) when challenged with viral stimuli in the absence of the Th2 related cytokines IL-4 and IL-13. Thus, it may support the reduction of allergy or asthma symptoms which worsen with viral infection, as increased TSLP levels promote a Th2 response.

Other botanicals with common use in other cultures have also been shown to reduce cytokine mediators of allergy including TSLP. Schizandrin, the bioactive agent found in the Chinese five-flavor berry Schisandra chinensis, has been shown to inhibite the production and mRNA expression of TSLP in human mast cell lines.[29] Atractylone, the active moiety of a Korean herb Pyeongwee-San, has also been shown to reduce cytokine mediators of allergy and inflammation including TSLP.[30] Bamboo salt, another traditional Korean treatment for allergies, also has been shown to decrease levels of TSLP in activated mast cells, with hydrogen sulfide being the active compound.[31] Tryptanthrin, an anti-inflammatory alkaloid derived from the Japanese indigo plant (Polygonum tinctorium Lour.) and other natural sources has been shown to reduce production of TSLP as well as inflammation and proliferation of mast cells stimulated by TSLP. [32],[33] It also was shown to reduce levels of histidine decarboxylase, histamine, IL-4 and IL-1β while improving lesions of atopic dermatitis.[34]

One Response to “Thymic stromal lymphopoetin (TSLP), the long and short of it”