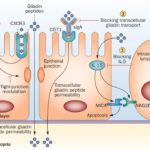 Dr Carrie Decker ND, explores the possible risk reduction benefits achieved by enzymatic breakdown of inadvertant exposure to gluten peptides. Individuals who experience coeliac disease or Non-Coeliac Gluten Sensitivity (NCGS) are at risk for exposure to gluten in many settings. Although the home setting can be fairly well controlled by elimination gluten or utilising cooking strategies to separate gluten-containing foods from those that are gluten-free, many restaurants and homes of friends and family often are not as well versed in making foods that are gluten-free.

In such settings the health of these individuals may be compromised if they are not able to avoid accidental exposures. The exposure of children to gluten in uncontrolled settings is often more common than for adults, as birthday parties and overnight stays or gatherings with friends often include foods such as pizza, cake, and biscuits. Of course there is an option of sending a special meal for a child, but this experience can lead to a child feeling isolated or “different” and may be difficult emotionally as others do not understand why their diet is different.

Utilisation of an enzyme that supports the digestion of gluten is a common strategy in such settings, however many gluten-digesting enzymes which only contain Dipeptidyl peptidase IV (DDP IV) do not fully break down immunogenic gluten peptides. DDP IV is an exo-peptidase enzyme that acts on the terminal peptide bonds of gliadin, and has an optimal function at neutral pH.[i]  It has been observed in vitro that proteolytic activity of several gluten-digestion specific preparations containing high amounts of DDP IV with other proteases could only partly neutralise gluten proteins and are ineffective in degrading immunogenic gluten fragments from both the α- and γ-gliadins.[ii]

An endo-peptidase derived from Aspergillus niger has been found that cleaves the internal blonds of the gliadin peptide. It was shown in vitro to degrade the immunogenic gliadin fragments which the DDP IV combination proteolytic enzymes were not able to.[iii] A combination known as Glutalytic® that includes the A. niger derived peptide, DDP IV, and an additional protease has been studied in clinical trials to assess markers of inflammation, gluten exposure, and a variety of symptoms in individuals taking the enzyme compared to placebo with the consumption of gluten.

In one small study, 20 individuals not known to have coeliac disease were blinded and received either 2 capsules of Glutalytic® or a placebo prior to meal consumption for a period of a week.[iv] Participants were instructed to maintain a diet record but not change their diet in any fashion. A questionnaire that is utilised to assess a spectrum of symptoms that commonly occur in individuals with coeliac disease and NCGS was completed prior to and at the end of the study. It was found that participants taking Glutalytic® experienced a significant decrease in reported pain in the upper abdomen, feeling bloated, trouble emptying bowls, and food cravings compared to placebo (p ≤ 0.05). Additionally, symptoms that were improved by both Glutalytic® and the placebo included rumbling of the stomach, hunger pains, energy levels, and headaches.

A longer 30-day clinical trial in 37 individuals not known to have coeliac disease assessed both reported symptoms via a more comprehensive questionnaire as well as blood analysis of comprehensive metabolic panel, C-reactive protein levels (CRP-an inflammatory marker), and deaminated gliadin IgA and IgG antibodies before and after the study.[v] In this study, individuals were instructed to take 1 capsule of the Glutalytic® or a placebo prior to meal consumption as well as record their food intake but not make dietary changes. The questionnaire assessing symptoms was performed prior to the study, at 14 days, and after study completion.

The deamidated gliadin IgA antibodies were significantly reduced in the Glutalytic® group compared to placebo (p = 0.024).  A significant difference at the final time points of the CRP levels was observed using an independent T-Test (α ≤0.05) with the CRP level being lower in the Glutalytic® group. One consideration for this is that the initial CRP levels, although statistically indistinguishable between groups, was higher than the reference range with a much greater standard deviation in the placebo group. CRP is highly variable from day-to-day and is increased with infections, inflammation, arthritis, burns, trauma, and certain cancers.

Parameters which were not reported as changed but which can be seen in the provided table to be different was the deamidated gliadin IgG antibodies, which increased in the Glutalytic® group by the end of the study. The CRP value of the placebo group also decreased, but this change was not assessed for significance. Differences in the deamidated gliadin IgA antibodies and CRP levels existed between placebo and intervention group prior to the study but were not assessed for significance.