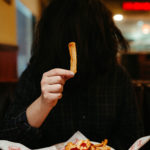 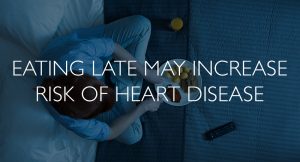 Preliminary research presented at the American Heart Association’s Scientific Sessions 2019 has shown that women who consume a higher proportion of their daily calorie intake in the evening had a greater risk of developing #cardiovascular disease. Previous studies have suggested that eating meals earlier in the day can aid weight loss, eating later may slow down #metabolism, and that later mealtimes can raise #inflammatory markers usually associated with #diabetes and #heart disease. This new research adds weight to the idea that eating more calories in the evening may negatively affect our health.

The study was led by scientists at Columbia University in New York and followed 112 women, the results showed that for every 1 per cent increase in calories after 6pm heart health declined by a statistically significant amount. Those women who consumed more of their calories after 6pm were found more likely to have higher blood pressure, higher body mass index (#BMI) and a poorer long-term control of blood sugar. Lead study author, Nour Makarem, Ph.D. concluded that,

“These preliminary results indicate that intentional eating that is mindful of the timing and proportion of calories in evening meals may represent a simple, modifiable behaviour that can help lower heart disease risk.”

With the issue of high blood pressure being raised, our attention moves to another recent study, this time highlighting the different effects of medication when taken at different times of the day. Scientists from the University of Vigo in Spain randomly split 19,000 men and women with high blood pressure into two groups, asking one half to take their medication before bed and the other half when they woke up. The participants were monitored for approximately six years and kept track of their sleeping patterns as well as having regular blood pressure checks. Those patients who took their medication at night had significantly lower blood pressure both at night and in the day than those who took theirs in the morning. Those taking at night also saw a further dip in blood pressure during sleep. Blood pressure during sleep has been shown to be a good indicator of potential heart conditions. Even accounting for factors such as old age and diabetes, those participants who took their medication at night saw a continued fall in their sleeping blood pressure and had a 45 per cent lower risk of heart conditions than those taking theirs in the morning. With current #hypertension treatments not recommending any preferred treatment time this offers a simple cost-free way of improving health outcomes.

Both studies point us towards the importance of understanding #circadian related impacts on health. Our body clock is responsible for so much more than just when we sleep and wake; hunger, mental alertness, mood, stress, heart function and immunity also operate on a daily rhythm. Whilst the heart keeps to its own time it does also rely on the brains biological clock for cues. Doctors have realised that heart problems are more likely to occur at certain times of the day, either in the early morning or evening, and so taking blood pressure treatments in the evening can improve their effectiveness by working in harmony with the body’s circadian rhythms.