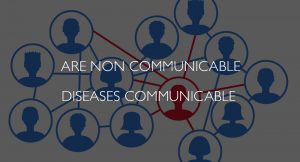 Noncommunicable diseases (#NCDs), also known as chronic diseases, happen as a result of a combination of genetic, physiological, environmental and behavioural factors, and are not transmissible directly from one person to another. The main types of NCDs are #cardiovascular diseases, #cancer, #asthma and #diabetes, and they now account for 70% of all deaths globally. The definition of NCDs rules out any microbial involvement, but data is increasingly showing us that the microbiota of individuals with various NCDS has been altered. Scientists have transplanted dysbiotic microbiota from animal models of NCDs into healthy animals which have resulted in the disease. The Canadian microbiologist Brett Finlay has recently written an article in Science Mag proposing that some NCDs could have a microbial component capable of communicability via the microbiota.

Cohabitants and spouses have been found to have a more similar gut bacterial microbiota than genetically similar siblings who live apart and we would obviously expect families who share diets and environments to have a similar microbiota. The transmissibility of NCDs is hard to investigate because it is so difficult to uncouple environment from the microbiota. A leading risk factor for NCDs is #obesity which studies are showing may be communicable in humans. A study of 12,067 people over 30 years showed that having an obese friend was associated with a 57% higher chance of being obese, whilst there was a 40% higher chance of obesity of a sibling was obese. Another study has shown that when families were moved to an area with high obesity rates their body mass index (#BMI) increased. With obesity the highest risk factor for type 2 diabetes (#T2D), there are thoughts that the risk for developing it may also have a communicable component through the microbiota. Spouses of an individual who have had a T2D diagnosis within a year have a higher risk factor of developing the disease themselves. Spouses of those living with inflammatory bowel disease (#IBD) have been found to have similar altered microbiota compositions and a higher rate of disease than can be accounted for by chance alone.

Finlay suggests we use Robert Koch’s postulates, published in 1890 and used to establish whether a microbe was the cause of an infectious disease, and adapt them to NCDs to determine whether the collective microbiota can be considered an “infectious agent”. The first postulate states that bacteria must be present in every case of the disease, we know a strong correlation exists between a dysbiotic microbiota and many NCDs. The second states that the bacteria must be isolated from the host with the disease and grown in pure culture, something that can happen with dysbiotic microbiota being harvested form faeces and then grown. The third requirement is that the microbe, when inoculated into a healthy organism, should cause the disease, which we have seen through faecal microbiota transplantation of various NCDs. We can apply these amended postulates to the most prevalent NCD, cardiovascular disease (#CVD), including heart attacks and strokes, and find a strong correlation.

Dysbiotic microbiota differ in composition between individuals and are associated to varying degrees with different NCDs, playing a far smaller role in cancer than in CVD for example. Substantial additional research is needed in order to uncouple the hypotheses that transmissible dysbiotic microbiota contribute to NCDs in humans from environmental and genetic components. Finlay suggests that the microbiota could be a causal and transmissible element in certain diseases. Here we have focused only on gut bacteria, yet viruses and fungi may well also contribute to NCDs. To unlock the potential role of transmissible microbiota in NCDs will provide opportunities to help with treatments for these complex diseases.