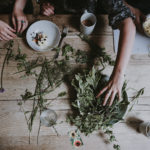 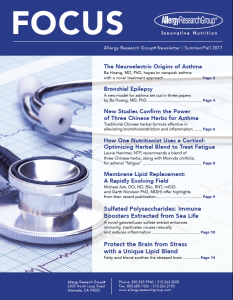 If you’ve ever tried to breathe through a straw or felt as if an invisible gorilla had your chest in a vice, or simply had to focus all your will and attention on drawing each breath—if you’ve ever had a bad asthma attack, you know how frightening asthma can be.

The standard medications for asthma include inhaled corticosteroids and beta-2 agonists, leukotriene modifiers, oral corticosteroids, and theophylline.[6] Steroids, however, can suppress endogenous cortisol production[7] and immune function.[8] Even inhaled steroids can suppress adrenal function, cause mucosal immunosuppression, and increase risk of respiratory infections.[9] In spite of their risks, they are being overprescribed: “Inhalers have become almost a fashion accessory”, write two respiratory specialists in a 2015 editorial.[10]

Children under five, in particular, may be at risk of being overprescribed potent oral steroids, when less potent inhaled steroids or beta agonist sprays would suffice, according to a 2017 study. The study analysed the computerised databases of Texas Children’s Health Plan between January 2011 and January 2016.[11] “Over the past 30 years, [oral corticosteroid] prescribing for children with asthma has gone from underuse to what now appears to be substantial overprescribing”! the authors write.

A Natural Alternative as Effective as Steroids— Without the Side Effects?

For the last 17 years, paediatric immunologist Xiu-Min Li, MD, and her team at the Icahn School of Medicine at Mount Sinai in New York have been proving the efficacy of a novel, nonsteroidal blend of traditional Chinese herbs for asthma.14 The formula is called ASHMI (anti-asthma herbal medicine intervention) and blends the three most effective herbs found in a traditional 14-herb formula15 with a long history of human use in China: lingzi (Ganoderma lucidum, commonly known as reishi), gancao (Glycyrrhiza uralensis, commonly known as Chinese liquorice) and ku shen (Sophora flavescens, commonly known as shrubby sophora).16 ASHMI has broad therapeutic effects on the major pathogenic mechanisms of asthma, including inflammation and bronchoconstriction, and it also raises endogenous cortisol production instead of suppressing it as steroid medications do. In vitro studies conducted by the team have unravelled the ways in which the herbs function—modulating the activity of immune cells, inhibiting smooth muscle contraction, and increasing the production of cortisol. Human studies, in turn, have demonstrated the formula’s power and gentleness.

In our March 2008 edition of FOCUS, we reported on the team’s first human study, an FDA-approved Phase I and Phase II trial involving 13 researchers—11 of them physicians—from the Weifang Asthma Hospital, the Weifang School of Medicine, and the Mount Sinai School of Medicine. This study found ASHMI as effective as prednisone, without suppressing cortisol or immune function.[14]

Post-treatment lung function significantly improved in both groups, with the steroid group showing only a slightly greater benefit. Clinical symptom scores, use of beta agonist bronchodilators, and serum IgE levels were also reduced significantly in both groups. However, a key difference emerged: though both groups had low cortisol levels before the study, cortisol was even further suppressed in the prednisone group, while in the ASHMI group, levels increased into the normal range. And while prednisone decreased the secretion of interferon (IFN-γ), ASHMI increased it, improving immune function.[16]

A second randomized, double-blind, placebo-controlled, dose-escalation study followed in 2009 to assess safety. 20 allergic individuals were included, to test three different doses of ASHMI: 600 mg, 1200 mg, or 1800 mg. For each test dose, four individuals were treated, and two individuals were given the placebo.[17] All three doses were well tolerated.18[18] Vital signs, electrocardiogram findings, and laboratory results obtained at pre-and post-treatment visits remained within normal range. No abnormal immunologic alterations were detected.

How ASHMI Works at the Cellular Level

Studies in mice reveal how ASHMI might work. First, it appears to prevent early reactivity to allergen exposure.19[19] It also reduces late airway reactions, and reduces airway inflammation and remodelling (the long-term thickening of the smooth muscles of the bronchi). Levels of collagen in lung fluid—which are associated with airway remodelling—are also reduced. In addition, ASHMI also helps inhibit constriction caused by the neurotransmitter acetylcholine and increase levels of smooth-muscle relaxants such as prostaglandins.  It reduces lung inflammation and mucus in mice bred for late-onset asthma.[20] A single dose of ASHMI dramatically reduces airway hyperresponsiveness in response to challenge with the neurotransmitter acetylcholine, which can contribute to asthma.[21]Treatment of mice with ASHMI in drinking water for four weeks prevents the development of asthma, and this therapeutic effect remains at eight weeks post-therapy.[22]

A 2013 editorial in Clinical & Experimental Allergy, entitled Chinese Herbal Anti-asthma Tea to Go!, reviews the work by Li and her colleagues and concludes: “Experimental and clinical evidence suggests that ASHMI may be an effective future modality for treatment and/or prevention for allergic asthma.[26] In sum, ASHMI improves lung function, reduces symptom scores in asthma, and leads to decreased beta2-agonist use -and does so without prednisone’s adverse effect on adrenal function, and with no overall immune suppression.

[17] Note: Although the protocol specified enrollment of 18 individuals in the study (six per dose level), because of an error in randomizing, two additional individuals were recruited in order to complete the experiment while maintaining blinding.