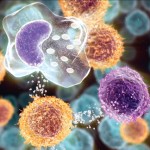 As complex organisms surviving in a world of molecular and physical challenges our long ancestry has meant we have evolved a remarkably complex system of defence and repair. Regular insults have played a major role in natural selection traits and diverse defence mechanisms have evolved to support our survival and reproduction in the face of substantive risk.

The result is our beautiful, intricate and complex immune system, in which we have developed two primary structural divisions, one that is encoded through our genes (germ line encoded: innate) and needs little or no education to be up and running and one that requires coercion, education and evolution (adaptive: cellular and humoral) to provide us with an exquisite and contextual set of defensive capabilities and enduring molecular memories.

So compellingly attractive to researchers was this second part of our immune armamentarium that for decade’s they focussed on it as the site of primary modification, with vaccines being the best understood outcome. Then in the early 1990s immunology’s ‘dirty little secret’, was exposed.[1] The innate structures, that historical artefact of human survival began to take centre stage. The previously quiescent part of the emerging science of immunology began to stretch its proteins and expose its receptors and its intimate and essential relationship with our commensal as well as our transient pathobiontic and pathogenic bacteria, viruses, fungal agents, and parasitic organisms.

Charles Janeway was the first immunologist to explain that immune responses could not occur unless antigen-presenting cells were first activated, and that they were activated via pattern recognition receptors (PRRs) that recognised evolutionarily conserved molecules on infectious nonself organisms. In effect, he said that the immune system’s default state is off and that it can be turned on by bacteria.

Then Polly Matzinger proposed her ‘Danger Theory’ in which she suggested that we could also experience what is known now as sterile inflammation, an adverse or inappropriate response to damaged endogenous cellular material called alarmins, and that this would happen due to the patterns in our damaged tissues being bound to the same triggering receptors that we have used to initiate a self defence mechanism against pathogens.[2]

These two significant shifts in thinking have underpinned many other uncoupling’s of the relationship we enjoy or tolerate between those cells that reside within and on us; essentially those that are not us, and those cells that are us and yet appear to be difficult to tolerate, that is our own cells and their contents can create inappropriate inflammation with disproportionate consequences.

My route to bring home these concepts into clinical practice is via the gastrointestinal tract which as we know is a passageway for dietary nutrients, microorganisms and xenobiotics. The gut is also home to viruses, bacteria, protozoa, and fungi, resulting in the formation of complex populations of microbes, collectively called the commensal microbiota, whose role in health management is becoming ever clearer. While the microbiota and their dietary metabolites maintain gut homeostasis, we also have to use an extensive range of innate and adaptive immune mechanisms to cope with them and our luminal environment. For the last 20 years or so, multiple bi-directional and interconnected instructive mechanisms between microbiota, luminal content, metabolites and mucosal immune systems have been uncovered, explored and dissected to ensure a better comprehension of their effects on human health, providing us with health generating opportunities.

Indeed, epithelial and immune cell-derived mucosal signals shape microbiota composition, while microbiota and their by-products primarily provided by the food selection consumed shape the mucosal immune system. Various genetic and environmental perturbations alter gut mucosal responses which impact on microbial ecology structures. On the other hand, changes in microbiota alter intestinal mucosal responses, gene expression and tolerance and open up a range of risks and benefits.

The relentless, continuous exposure of our intestinal mucosal surfaces to these triggers is reflected in the biological necessity for a multifaceted, integrated epithelial and immune cell-mediated regulatory system. Various specialised cells have evolved to be responsible for the barrier function of the intestinal surface (e.g., M cells, Paneth cells, goblet cells, and columnar epithelial cells) and these are strictly regulated through both positive and negative stimulation by the luminal microbiota and their available food stuffs through a range of secret and coded messages. Others work to maintain ecological diversity and eubiosis, generate appropriate defensive cells and translate environmental challenges through diplomatic cross talk to induce immunological tolerance and inflammation containment.

This enormous repertoire of commensal microbes necessitates host “friend–foe” recognition based on general motifs rather than that of individual microbial species.

Within the NOD-like receptor (NLR) family, there are several NLRP (NLR family, pyrin domain-containing) proteins that are involved in the formation of complex, inflammation driving inflammasomes. These multi-protein complexes are a key part of the network of cellular events required for secretion of the pro-inflammatory cytokines IL-1β and IL-18. Even if the discovery of the inflammasome is relatively recent, studies on the role of the NLRP3 inflammasome downstream effectors IL-1β and IL-18 already date back more than 20 years.[9]

The NLRP3 inflammasome is the best-characterised and has recently been implicated in gut homeostasis and determining the severity of inflammation in inflammatory bowel disease (IBD) and inflammation-associated colorectal cancer as well as functional disorders of the gastrointestinal tract. This also led to the discovery that other NOD like receptors including NLRP6 and NLRP12 also contribute to the maintenance of intestinal homeostasis and modulation of the gut microbiota, which in turn influences the health of the intestine and distant organs.[10]

In theory activation of the inflammasome in the epithelial layer of the intestine should be beneficial, as it would help to maintain homeostasis through sensing of commensal microbiota, bacterial clearance, and defensin synthesis. However, if the epithelial barrier is disrupted and becomes ‘leaky’, the microbiota gains access to the lamina propria and contacts cells of the immune system such as dendritic cells and macrophages.[11] In such a case, inflammasome activation may well have a deleterious effect on mucosal inflammation and associated systemic consequences may materialise including inflammatory bowel disease (IBD)[12], cancer[13], diabetes[14],[15], autoimmune disorders[16], atherosclerosis[17],[18], allergies[19], brain function[20], functional gut disorders[21] and even obesity and non-alcoholic fatty liver disease.[22],[23]

One of the most significant undercover operatives in the generation of mucosal immune tolerance, and its adverse loss of diplomacy – reflected as unresolving inflammation are the mitochondrial organelles found in abundance in most human tissues, and in great concentrations in the immune and constitutive tissues of the gut.[24],[25],[26],[27]

Stimulation by DAMPS derived from stressed mitochondria[28] and commensal bacteria, viral and fungal-derived microbe-associated molecular patterns (MAMPS) as well as pathogen induced reactive oxygen species (ROS) and associated PRR triggers from lipopolysaccharides and other pathogenic exudates provoke the assembly of inflammasomes, which are involved in maintaining the integrity of the intestinal epithelium, defensive clearance, bacterial eubiosis and immune maturation and tolerance.[29],[30]

Mitochondria it appears retain enough of their proteobacterial DNA to be described as ‘dysbiotic’, once they become dysfunctional, through multiple mechanisms. It is the newly uncovered cross relationship between dysbiotic microbiota in the gut and dysbiotic mitochondria that represent one of the most exciting mechanisms for explaining multiple inflammation driven illnesses. Mitochondria, that are aged, swollen, leaky, releasing ROS molecules, soluble ATP, oxidised mitochondrial DNA and cardiolipin amongst others are now recognised as key triggers of inflammasome formation and innate immune activation.

To induce appropriate diplomacy and restore tolerance in the gut and other systemically related tissues needs these mechanisms to be taken into account. Fortunately once we understand that a holistic (an old but valid moniker) approach to restoration of multiple intersecting pathways is required, the role of monotherapeutic interventions are understood to be less relevant, and induction of change on multiple points using modest but aggregating processes has powerful and often surprising outcomes.

Two of the key points of intervention in the ART (Avoidance, Resistance and Tolerance)of diplomatic immunological restitution include the application of ‘food as medicine’, in which specific foods are selected to induce specific immunological cell generation via conversion through optimal eubiosis and gene transcription. They in turn transfer this value derived from the active metabolites (butyrate and propionate)to distant tissues, such as the lung and the reduction of asthma, inflammation management and metabolic conditions.[31],[32],[33],[34] The other is the use of specific mitochondrial enhancers, to diminish the activation and release of mitochondrial inducing inflammasome triggers which can be applied to have induce local and system anti-inflammatory effects.[35],[36],[37],[38],[39]

The barrier permeabilisation that exists in many dysbiotic gastrointestinal problems and permits the adverse generation of a family of effector immune T cells is also energetically managed and the role of mitochondria in the restoration and management of barrier quality is an exciting new therapeutic opportunity.[40]

The synergistic benefits of these important strategies can be further enhanced through additional lifestyle interventions as well as selected therapeutics and pharmacologic’s, but ultimately the recognition that the great majority of non-communicable diseases need multiple points of intervention to reverse or manage complex and often overlapping problems, opens up the functional medicine model as a mechanism of data collection and analysis, with subsequent coordinated treatments as a therapeutically powerful ally in clinical care and every day decision making for the majority of patients.

Previous Post
36 ‘Holes in the Roof’ The Dawn of the Era of Treatable and Preventable Alzheimer’s Disease
Next Post
Food, Bugs, Transcription Factors and Genetics In Gastrointestinal And (Mucosal) Immune Function: How to Leverage Our Current Understandings to Achieve Better Local and Systemic Health Outcomes.