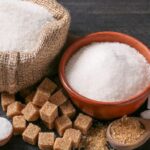 COVID-19 Vs Sugar – Which is the bigger risk?

As the UK progresses towards the current milestones indicated by the government regarding the changing of social restrictions and the possible development of a different societal set of norms, either temporary or prolonged, it is time to start to categorise risk and future health care plans as our work (in health provision) will be in large part shaped by these developments.

Clearly, the aim of all countries needs to be focussed on the setting up of a future set of plans, strategies to mitigate future zoonotic migrations. But why stop there?

People, environments, and governments are undergoing serious challenges to their futures and part of this hinges on the development of a sustainable approach to health generation. The last 12 months has exposed international vulnerabilities, poor risk management and the associated consequences of a very small pathogen finding a willing host for its journey around the world.

The current and future pressures, biological, economic and societal, will engender persistent needs for a change in the way lives are lived. Whilst the “What does not kill me makes me stronger.” aphorism by philosopher Friedrich Nietzsche’s is inspiring, for anyone suffering from long Covid, which is most likely to be women aged between 40-60, can tell you, it is not always true. Sometimes what does not kill you just makes you weaker. Women are bearing the primary consequences of Covid-19 in its acute phase and long phase, as well as the brunt of the economic, psychological and personal consequences.

More-than Half of the 327 patients assessed in this study, were women under 50 who did not feel fully recovered when followed up on average seven months later. Persistent, life-affecting symptoms were reported by 93.3%, with fatigue and breathlessness the most common.

Interestingly, a subset of people with long Covid, have recently supplied anecdotal reports on responses to vaccination appearing to offer a resolution of their symptoms in approximately 30% of cases, with 50% seeing no change and the balancing numbers stating they felt worse – about 18%. Presenting a possibility that adverse persistent immune responses may be ‘reset’ using vaccination.

Meanwhile, metabolic disease, a dominant risk factor for Covid-19 poor outcomes is also a generator of other life-changing illnesses.

It is proposed that the relationship between increased dietary intake of sugar and metabolic dysfunction began back in 1954, at the USA based Sugar Research Foundation’s (now known as the Sugar Association) annual conference where an all-out offensive in defence of sugar was begun by Dr Henry Bohn Hass.

This resulted in surreptitious lobbying and scientific publications, that played down sugars risks and focussed on fat as the ‘bad’ nutrient. This misinformation campaign carried on for decades, with Coca-Cola, a primary source of dietary sugars, only agreeing in 2016 to stop funding similar studies. The Sugar Foundation in the same year were quoted in the JAMA Internal Medicine special communication as acknowledging their industry sponsored a research program in the 1960s and 1970s that successfully cast doubt about the hazards of sucrose while promoting fat as the dietary culprit in coronary heart disease.

The World Health Organisation (WHO) in 2015, a year before these retractions, compiled a report outlining the health-damaging effects of free sugars in the human diet, and thousands of supporting studies have been published on the risks of free sugars. In particular women of menopause age, tend to demonstrate higher levels of metabolic dysfunction, correlating with the age-related risk profiles for Covid-19 infection outcomes.

One of the more recent additions to this growing body of research on the adverse effects of sugar on the body is a study focusing on the harmful effects of an arguably moderate amount of daily sugar intake on one of the most crucial human organs, the liver. Researchers from the University of Zurich and the University Hospital Zurich published a study in March 2021, outlining their findings from a trial conducted on 94 subjects, who were given sugar-sweetened drinks over seven weeks.

Unsurprisingly, there was an increase in weight and body fat percentage across all three groups. However, according to the study, “This increase was only significant for the glucose (sugar-sweetened beverage) intervention.” As for sucrose and fructose, even though the weight gain was not as significant as for straightforward glucose, their effect on the liver was far worse. Both doubled the fat production in the liver in comparison to the glucose group and the control group, and this continued up to 12 hours after consumption.

Beverages with the sugar’s fructose and sucrose (glucose and fructose in combination) increased liver production of fats (lipids). This liver fat build-up is part of a loss of our metabolic health, a feature highlighted in the recent pandemic as a primary risk factor for adverse outcomes. In other words, poor dietary and lifestyle practices, in particular, the consumption of free sugars has a local organ effect and an immune consequence, particularly increased inflammation.

Yet in the USA, doughnut giant Krispy Kreme is offering “sweet support” to Americans who protect themselves against SARS-CoV-2 by giving a free glazed doughnut to anyone who provides proof of having had a jab. It’s one of the many ironies in the last 12 months, a company in part responsible for the expansion of waistlines in the USA via the generous helpings of sugar in its products, rewarding the most at risk people having a vaccine, delivered at taxpayer costs, with a processed food that contributed to their infectious and non-infectious disease risk initially!

An overweight population is the next pandemic waiting to happen. Looking at countries like Japan and South Korea where they have very low levels of Covid-19 deaths as well as very low levels of adult obesity, you will see they have prioritised public health across a range of lifestyle orientated measures, including population weight, and it has paid off in the pandemic today and in the future. Together with their co-ordinated approach to limit transmission, their loss of lives is impressively lower than that of the UK, USA and Brazil, and whilst they are currently managing variant induced infection increases, their overall numbers in early April 2021 remain very low.

Metabolic dysfunction has been a direct consequence of food production changes. Since the early 1950s, corporations have lobbied and continue to do so, with profit not health as their primary aim. The consequential costs are not borne by one person, but by society. Covid-19 has exposed the related vulnerabilities in immune competence when lifestyle choices have increased metabolic disorganisation and weight gain.

Arguably sugar can be viewed as a threat of global equivalence to Covid-19 and all related non-communicable diseases but changing people’s nutritional and lifestyle behaviour is hard. Even when faced with relatively acute threats, many prefer to engage in obfuscation and denial, rather than appropriate individual, collective and societal action.

Managing nutrient delivery and allocation for metabolic health relies on many of the same nutrients that the immune system does. This is not a co-incidence, blood sugar dysregulation and immune system optimisation both require healthy wholefoods, fibre and specific micronutrients including vitamin D, C, B’s, and minerals, selenium, chromium, zinc and magnesium.

Whilst lifestyle events are of equal importance, it’s a valid point to remember, you cannot exercise yourself out of the consequences of a poor nutrient-deficient diet. Whilst we have all been focused on the consequences of viral transmission, it’s more powerful to recognise that viruses need hosts able to offer viable replication opportunities.

The progressive dilution of human resistance driven by societal, emotional, environmental, and nutritional challenges should be the focus of our overall recovery and future resilience, not simply the provision of vaccines and medications.