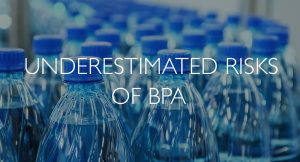 #BPA (#bisphenol A) is a chemical added to many commercial products, that when mixed with other compounds, produces strong and resilient plastics. BPA-containing plastics are commonly found in food containers, drinks bottles, hygiene products and are used to make epoxy resins that line canned foods. The health effects on the body of BPA products has proved a controversial subject. A new analysis, in the peer-reviewed Lancet Diabetes and Endocrinology Journal, suggests that BPA chemical levels in humans has been drastically underestimated based on a new method for evaluating exposure.

Approximately 9 million tonnes of BPA are produced each year, resulting in daily human exposure. Previous research has suggested that BPA can affect a variety of #endocrine signalling pathways and that exposure during gestation can be linked to effects on growth, metabolism, behaviour, fertility and cancer risk. It is essential we understand the amount of BPA that enters the human body in order to fully appreciate the risks it can bring. This new research has examined levels of BPA in urine as well as counted the #metabolites of BPA which are formed when the body breaks down and eliminates a chemical.  Once BPA has entered the body it rapidly breaks down, hence the importance of assessing metabolite levels for true accuracy. Currently, most agencies rely on analytical techniques that only indirectly asses BPA metabolite levels, which largely conclude that the chemical provides a negligible risk to our health.

Using the new method, scientists analysed the urine from 29 women in their second trimester of pregnancy and found that their BPA exposure levels were on average 44 times higher than when measured using traditional methods. With regulatory decisions for BPA based on the assumption that our exposure is very low, this new method calls for a re-evaluation of chemical analysis and highlights the importance of the consideration of their metabolites to fully understand their impacts on our health.