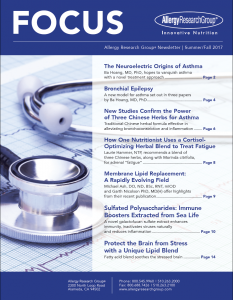 An Interview with Polymer Chemist Helen Fitton on Fucoidan

Biography: Helen Fitton, BSc, MSc, PhD, is an applied chemist and the chief scientist for Marinova Pty Ltd, a biotechnology company headquartered in Tasmania, Australia, and dedicated to the development and manufacture of active biological extracts from marine macroalgae. Dr. Fitton is adjunct senior researcher at the University of Tasmania. She has contributed to 35 published research papers and 3 book chapters. She has also coauthored several peer review articles summarizing the scientific literature on fucoidans.

Focus: Your background is in polymer chemistry. Tell us a little about that, and how you came to specialize in fucoidans.

Fitton: I’m British, and began my work with a focus on crafting long chains of polymers in hydrogels and plastics. I was part of the team that made a synthetic cornea years ago. I then married and moved to Australia, and began to work on seaweeds and the bioactive compounds in them. Fucoidans are remarkable. First of all, you can eat seaweed extracts, which is great. Fucoidans have really powerful biological functions, and yet no toxicity. To this day I’m never bored working on them.

Focus: Do you think seaweeds developed them as a survival strategy?

Fitton: Absolutely. Fucoidans concentrate around the reproductive parts of the plant and protect it from marine viruses. Studies show they also prevent the adhesion of bacteria to cell surfaces and probably protect the seaweeds by that mechanism as well. This has significance for humans since, for instance, they prevent the adhesion of E. coli onto epithelial cells. They prevent adhesion of that nasty gastric pathogen, H. pylori, to gastric cells. A group of scientists in Asia looked at whether eating fucoidan would help individuals with stomach ulcers. They added it to the normal antibiotic treatment and saw an increase in the rate of healing. That makes sense, since fucoidans decrease inflammation as well as inhibit the ability of pathogens to stick and persist. Once you stop a pathogen from sticking to a cell, you render it much more vulnerable to antibiotics.

We also looked at both normal E. coli that are naturally present in the gut flora, and Staphylococcus spp., pathogenic bacteria that can cause horrible diarrhea and is usually treated with an antibiotic called gentamicin. Fucoidan has been shown to have protective effects on ‘good’ bacteria in the gut during antibiotic use, and does not interfere with the action of the antibiotic on pathogenic ‘bad’ bacteria. Although very effective in treating infections, antibiotics can damage the symbiotic bacteria that live in the human gut – our ‘good’ bacteria. As demonstrated through human and animal studies, changes in the composition of the microbiota due to antibiotics may lead to negative long-term effects including obesity and diabetes mellitus.

In one in vitro study we conducted involving the common antibiotic gentamycin, levels of human E.Coli bacteria – good bacteria that naturally reside in the gut – were protected by fucoidan. At the same time, fucoidan was shown to have no impact on the gentamycin activity against the pathogenic S.aureus bacteria. This indicates that fucoidan is able to protect levels of ‘good’ bacteria in the gut, while at the same time, allowing antibiotic action against ‘bad’ bacteria.x. I’d love to tell you that I know for sure why that happened, why there is a differential effect on a pathogen and a non-pathogen. It probably has to do with the receptors on the surface of the bacteria.

Focus:  Tell us a little bit about the anti-inflammatory activity.

Fitton: We carried out a nice colitis study in mice, since colitis models in mice mimic inflammation in the human gut. And with a very modest dose you can restore the mouse back to nearly normal. Right now, we are working on obtaining biopsies from individuals and testing fucoidan’s effect on inflammatory markers in biopsied tissue. But that’s not an easy experiment to perform—first you have to convince people to agree to the biopsies!

It is able to block selectins, which are receptors on inflammatory white blood cells called neutrophils. You can block selectin function and stop the white blood cells from migrating into inflamed tissues. So, you might, for instance, stop damage after a stroke or heart attack or an accident—any event where there is tissue breakdown and massive inflammation. It’s that post-inflammatory cascade that can cause so much damage.

Fitton: Yes, it blocks certain viruses from entering the cell via its receptors. This is a specific receptor blockade response. You can see it very strongly with the herpes group of viruses, particularly Type 2 herpes, and cytomegalovirus. It also works well against HIV. It doesn’t actually kill these viruses. There is no killing going on at all. It simply blocks the receptors they use to enter the cell.

Focus: Is the action mostly in the gut, or is there systemic uptake?

Fitton: That’s a big, important question. Like other large molecules, such as chondroitin sulfate, most of the effect is in the gut, but there is also uptake and definite systemic biological effects. In one of our initial studies we looked at how much was systemic after oral ingestion, and we estimated about 0.6% of a dose.

Focus: Fucoidans can vary greatly in their arrangements. Do they share some common abilities across all varieties?

Fitton: Yes. All fucoidans have a lot of fucose. Fucoidan from Undaria

pinnatifida has a few more galactose molecules in the background and is slightly more acetylated, which makes it slightly more fat-soluble, than fucoidan from Fucus vesiculosus or other sources. All fucoidans are heavily sulfated, antiviral, anti-inflammatory, and block selectins. Research into fucoidan has continued to gain pace over the last few years and point towards many exciting potential therapeutic or adjunct uses.