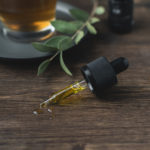 The Endocannabinoid System and Stress 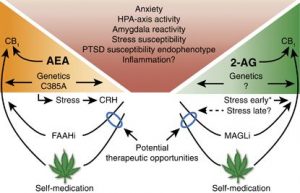 With as much attention as the endocannabinoid system is receiving for its role in the modulation of pain,[1] mood,[2] inflammation, and immune system response,[3] a discussion of the body’s stress response would be incomplete without mention of the regulatory role the endocannabinoid system may have here as well. In addition to moderating pain pathways and inflammation, which can be contributors to hypothalamic-pituitary-adrenal (HPA) axis activation, direct signaling and feedback loops between the HPA axis and endocannabinoid system also exist.[4],[5] Although research on this continues to be expounded upon almost daily, certain observations pertaining to how the endogenous cannabinoids N-arachidonoylethanolamine (AEA), also known as anandamide, and 2-arachidonoylglycerol (2-AG) interact with the HPA axis are worthy of mention.

The cannabinoid receptors CB1R and CB2R are expressed throughout the body, CB1R primarily in the neurons (including the brain, spinal cord, and autonomic and enteric nervous systems) and CB2R primarily in circulating and tissue-specific immune cells (such as the microglia).[6] Both AEA and 2-AG bind CB1R and CB2R, although their affinity and efficacy vary.[7],[8] Although basal levels of AEA and 2-AG exist, both endocannabinoids can be synthesised and broken down locally on demand when certain signaling pathways are activated,[9],[10] and, as such, may further serve to control synaptic transmission and intracellular signaling.[11]

In multiple studies, reductions in circulating endocannabinoid levels have been observed in individuals with chronic stress. In humans subject to 520 days of social isolation (to mimic space travel to Mars), significantly lower levels of 2-AG, reduced positive emotions, and higher levels of catecholamines were seen.[12] In individuals who experienced post-traumatic stress disorder (PTSD) after the 9/11 World Trade Center attacks, significantly lower levels of 2-AG were observed compared to those who were in close vicinity to the attacks but did not meet the diagnostic criteria for PTSD.[13] Significantly lower levels of both AEA and 2-AG have been shown in medication-free women diagnosed with major depression compared to healthy controls.[14] Exercise, which often has positive effects on depression, has been shown to increase AEA levels,[15] giving possible explanation for the experience known as a “runner’s high.”

Under normal conditions, endocannabinoid signaling has been observed to act as a negative regulator of HPA axis activity. Deletion of CB1R (also expressed in the adrenal tissue[16]) leads to hyperactivation of the HPA axis,[17] while increased endocannabinoid signaling attenuates stress-induced HPA axis activity.[18] More recent findings suggest that CB1R may play a role in both inhibiting and potentiating activation of the HPA axis by stress, with the inhibitory arm being tonically active and promoting recovery to baseline after acute stress.4 CB1R has also been shown to mediate the effects of stress on bone health[19],[20] and gastrointestinal system function.[21]

Many studies continue to investigate the interactions between the HPA axis and endocannabinoid system. Although some discrepancies and new findings continue to challenge our knowledge of the exact mechanisms by which these systems interact, overwhelming evidence points to the role the endocannabinoid system plays in promoting homeostasis of our stress response mechanisms,[22] in addition to modulation of pain, mood, inflammation, and the immune system.

[7] Hillard CJ. Biochemistry and pharmacology of the endocannabinoids arachidonylethanolamide and 2-arachidonylglycerol. Prostaglandins Other Lipid Mediat. 2000 Apr;61(1-2):3-18.