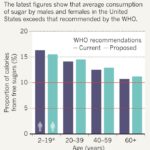 Sugar – The WHO and Tensions! 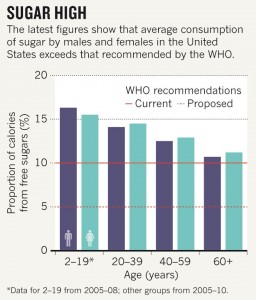 Scientists are gearing up for a battle with the food industry after the World Health Organization (WHO) moved to halve its recommendation on sugar intake.

Nutrition researchers fear a backlash similar to that seen in 2003, when the WHO released its current guidelines stating that no more than 10% of an adult’s daily calories should come from ‘free’ sugars. That covers those added to food, as well as natural sugars in honey, syrups and fruit juice. In 2003, the US Sugar Association, a powerful food-industry lobby group based in Washington DC, pressed the US government to withdraw funding for the WHO if the organisation did not modify its recommendations. The WHO did not back down, and has now mooted cutting the level to 5%.

“These are reasonable limits,” says Walter Willett, head of nutrition at the Harvard School of Public Health in Boston, Massachusetts. “Five per cent of calories is just a bit less than in a typical serving of soda, and we have good evidence of increased risk of diabetes with that intake, which of course increases with greater intake.”

Yet the sugar and food industry see this as a direct attack on their profit margins and no doubt a lot of consumers will see this as an attack on their freedom of choice – after all if they want to eat themselves to an early grave why shouldn’t they – or at least that is the siren call of the person who has jumped of the cliff but has yet to crash into the ground – we all know that once ill people mostly want all the help they mistakenly believe will allow them to continue digging their grave with fork and spoon.

Be prepared for lots of noise – but this is the right way to go – sugar ‘pure white and deadly’ has been under the radar of the average consumer for far too long.