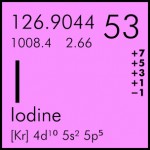 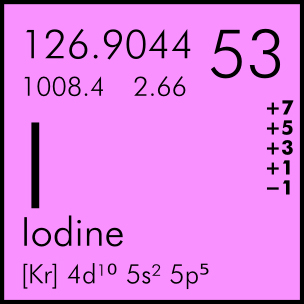 New research suggests the UK population is now iodine-deficient and a full review and evidence-based recommendations are needed to safeguard public health. The findings, presented on Tuesday the 12th April 2011 at the Society for Endocrinology annual conference, provide the only current data on the UK’s iodine status and demonstrate iodine-deficiency in a large sample population. Iodine-deficiency is the most common cause of preventable mental impairment worldwide.

In the study, which was funded by the Clinical Endocrinology Trust and is the first of its kind in the UK, Dr Mark Vanderpump (Royal Free Hampstead NHS Trust) and colleagues on behalf of the British Thyroid Association measured urinary iodine levels in samples from 737 14-15 year old girls from nine UK centres. Factors that might skew the results (e.g. diet, ethnicity) were assessed using a questionnaire. Variations due to season and location were corrected for via measurements taken in Summer 2009 and Winter 2009/2010 and water samples from each area were measured for iodine content.

The median urinary iodine level in participants was 80μg/L, making the group ‘deficient’ by World Health Organisation standards (defined as below 100μg/L). 69% of the samples were in this deficient category (below 100ug/L) and 18% of samples showed very low iodine levels below 50μg/L.

As this was a relatively small audit study that was confined to a single age group and sex, a full-scale investigation into the iodine status of the entire UK population is now warranted to see whether public health bodies need to implement any health measures.

Iodine is an essential trace element which helps the thyroid gland function properly. Most people get their iodine from their diet. Iodine-deficiency is the most common cause of preventable mental impairment worldwide and accordingly, the World Health Organisation has conducted a global programme of salt iodisation since 1993. The UK is yet to join this programme and does not require salt producers to iodise their salt.

Young women of childbearing age are the most susceptible to the adverse effects of iodine-deficiency and even mild deficiency may have an impact on the developing brain of foetuses and young children. It can also cause goitre. According to the World Health Organisation, iodine-deficient communities have IQs up to 13.5 points lower than similar but iodine-sufficient communities1.

“Our data suggest the UK is now iodine deficient, warranting a full investigation of the UK iodine status. We need to look into this now to decide whether public health bodies need to step in.

“The World Health Organisation has made iodine-deficiency a global priority and has been campaigning for at-risk countries to add iodine to their salt, a campaign which has been very successful. If it turns out that we do have a problem, this could be the most viable solution.

This research was presented as a lecture by Dr Mark Vanderpump at the Society for Endocrinology BES meeting on Tuesday 12 April 2011 at 10:00am. The abstract for this talk is reproduced at: View Abstract

After listening to Dr David Brownstein MD discuss the role of iodine in human health, one cannot help but feel that as with other trace minerals, that a deficiency of this nutrient may well be part of a collective low level malnutrition with a variety of complex interactions on human health.