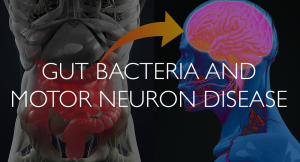 Motor neuron disease (#MND) describes a group of diseases affecting the nerves in the brain and spinal cord that gradually stop messages from reaching the muscles, leading them to weaken, stiffen and waste.  MND is life shortening and there is currently no cure. A new study from the Weizmann Institute of Science in Israel has shown that some species of bacteria may change the pace of the disease.

Researchers experimented on mice genetically programmed to get amyotrophic lateral sclerosis (#ALS), the most common form of MND. After receiving a dose of antibiotics, killing their gut microbiome, the animal’s symptoms became more severe. The team then homed in on the #gut #microbes finding 12 species existing in higher or lower numbers in the mice with the disease. Adding one species of bacteria at a time into the mice with ALS, researchers were aware that some made the symptoms of the disease worse. Most interestingly one species, Akkermansia muciniphila, slowed the pace of the disease.

Akkermansia muciniphila produces a chemical, called nicotinamide, which researchers hypothesize is secreted into the bloodstream and on to organs. Nicotinamide is thought to be involved in minimising oxidative stress and preserving healthy neurone function for longer. Early stage research with people is in place, with differences in gut microbes and levels of nicotinamide found in patients living with the disease compared with those who are not. “This adds to an emerging, but still fuzzy, picture of a different metabolism that seems to occur in people with ALS,” Dr Brian Dickie, the Motor Neurone Disease Association’s director of research development said.

Please see the link below for ways in which to increase akkermansia with dietary interventions, including A.muciniphila or prebiotics (FOS) to promote abundance in the gut.

One Response to “Gut Bacteria and Motor Neuron Disease”