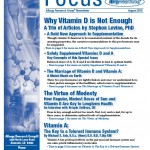 Vitamin K is one of those nutrients that has lost its position as a vital component of nutritional therapy as it was thought that so little was required. But along with vitamin A this nutrient, due to more sophisticated investigation options is now getting some well deserved respect and it is becoming clear that it impacts on many aspects of health – maybe this will gain as much respect as Vitamin D in the coming years.[1],[2]

Focus: So, let’s talk about vitamin K. Why don’t we hear more about this fat soluble vitamin?

SB: The vitamin K research community is extremely small, and we don’t have the volume of publications that the other fat soluble nutrients have. We’re probably decades behind in research findings. Vitamin K was identified for its role in blood clotting but we need very little for blood clotting. The body seems to be exquisite at taking what it needs to support clotting, and we don’t have a public health problem associated with abnormal bleeding. Our current dietary recommendations for vitamin K are based on the amount that’s ideal for clotting—90 micrograms a day for women and 120 micrograms a day for men.

In addition, the amount of vitamin K that is in circulation in your blood is about 1/30,000th of vitamin E, for example. There’s very little in our circulation because, unlike the other fat soluble vitamins, it’s recycled. So we only began to be able to measure vitamin K reliably in the 1980’s, and science has a quirky way of waiting until technology is available to address important questions. That’s what we’re trying to do, and we’re the only lab in the United States that studies vitamin K nutrition.

Focus: Tell us about vitamin K and bone health.

SB: Vitamin K is required to support the function of proteins in the body that regulate calcification. At least 13 vitamin K dependent proteins have been discovered thus far. The protein that requires vitamin K in bone is called osteocalcin and it’s a very important protein. Our lab looked at the Framingham heart study, and the nurse’s health study, and we found that high intakes of vitamin K in older people was associated with a lower risk of hip fracture. We looked at blood samples and found that lower amounts of vitamin K in the blood were linked with lower bone mineral density. This is a very consistent finding. One study in the Netherlands found that vitamin D, vitamin K and calcium together correlated with less bone loss at the hip than just vitamin D and calcium alone. Other studies have not found the same beneficial effect. The contradiction might be due to the fact that the women in the Netherlands were just entering menopause, and around the onset of menopause women do not seem as receptive to the impact of Vitamin D and calcium on bone loss. The effect of those two nutrients seems more pronounced later on. I wonder if certain nutrients like vitamin K may be most beneficial during a very narrow window when menopause is beginning.

Focus: What about vitamin K and the heart?

SB: Again, this is promising preliminary research. Cell studies suggest that high vitamin K actually slows the progression of insulin resistance but the work needs to be replicated.

Focus: How do you think vitamin K is linked with the other fat soluble vitamins?

SB: It’s well documented that vitamin E and vitamin K interact. Individuals on warfarin are advised to consume a constant amount of vitamin K, and to avoid extremely high doses of vitamin E. Over 1000 IU of vitamin E will interfere with the function of vitamin K and we’ve demonstrated that in humans. We’ve seen that vitamin D does work on vitamin K dependent proteins and so there may be a synergy between them, but we don’t have the data yet to support that. The same is true of vitamin A. There is data from long ago in animals where high intakes of vitamin A were detrimental to vitamin K but we haven’t studies on this in humans yet. We know that vitamins A and D work through the RXR receptor, but we’ve never explored whether vitamin K also does. Vitamin K might use that receptor as well. The fact is, all these fat soluble nutrients are absorbed in similar ways and share similar pathways, and as we move forward and advance our study of these nutrients in chronic disease, we may well find an overall synergy among all four of them.

References used for the interview

Previous Post
The Virtue of Modesty: How Regular, Modest Doses of Sun and Vitamin D Are Key to Longterm Health
Next Post
Broccoli Intake Influences IBD Pathology in Crohns Disease.