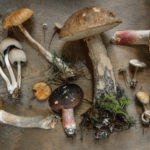 The times when we need additional immune support often hit us by surprise. Whether it is waking up with a sore throat and the sniffles or leaving work early with a fever and the chills, we often don’t see illness coming until it is upon us full bore. In retrospect, we may associate an illness with the coughing passenger on a recent flight, the kids being back at school, or the sick patients coming in and out of the office. The body’s immune system is also challenged by stress and/or sleepless nights, with cortisol impacting it as well.

Even worse than acute infections, a diagnosis of cancer hits many unsuspecting people entirely out of the blue. One might associate it with various circumstances that increase the risk of oncogenic cellular changes, such as genetics, toxicant exposure, or infections.[1] However, many individuals are subject to this same set of conditions but do not develop malignancy. We must therefore question if the body’s immune system could better protect us from the cellular mutations that eventually expand into cancer.[2]

Thankfully, several natural agents have shown promise in supporting our immune defenses, protecting us from both acute, self-limited illnesses and malignancy.

The Detoxifying and Immune Effects of Selenium

The trace mineral selenium is critical for the production and function of several selenoproteins. These selenoproteins, in addition to those required for thyroid hormone metabolism,[3] include five glutathione peroxidase enzymes that serve to reduce pro-oxidants like hydrogen peroxide, lipohydroperoxide, and peroxynitrite by coupling them with glutathione, which serves as a reducing agent.[4],[5] Other selenoproteins known as thioredoxin reductases and methionine sulfoxide reductase B1 also help reduce reactive oxygen species and regenerate other antioxidants.[6],[7] Collectively, they protect our cell membranes and DNA from damage,[8],[9] help the body detoxify and neutralize the oxidants generated from harmful substances (such as mercury),[10] and support cellular energy production and communication.[11]

Beyond glutathione, there are many direct mechanisms via which selenium has been shown to affect immune system function. In vivo, selenium supplementation has been shown to increase natural killer (NK) cell activity (humans),[17],[18] neutrophil migration,[19] T cell proliferation and response, and vaccine-induced immunity (humans).[20] Selenium deficiency is associated with more severe illness caused by viral pathogens,.[23] In patients with HIV, selenium deficiency is an independent predictor of HIV-1 mortality,[24] while studies support the use of selenium to reduce the HIV-1 viral burden and improve CD4 cell counts.[25]

Considering selenium’s importance for the body’s antioxidant systems, it isn’t surprising that the mineral also helps protect the body against cellular changes associated with cancer.[26] Lower levels of selenium intake are associated with an increased risk of certain types of cancer,[27],[28],[29] while supplementation with selenium has been shown to decrease DNA damage in humans[30] and induce cellular apoptosis in cells afflicted with cancer-causing mutations.[31] Selenium supplementation has additionally been shown to improve white blood cell counts and reduce the side effects associated with certain types of chemotherapy[32],[33] and radiation treatment.[34]

Dietary supplementation with selenium at a level of 200 mcg is generally considered safe,[35] while the Food and Nutrition Board of the US Institute of Medicine set the tolerable upper intake level at 400 mcg per day.[36]

The Immune and Antioxidant Effects of Maitake

Many are familiar with the medicinal benefits of certain types of mushrooms—maitake (Grifola frondosa), turkey tail (Coriolus versicolor), and reishi (Ganoderma lucidum) are just a few of those well known for their immune system–supportive effects. Many of these medicinal mushrooms are considered immunomodulators[37],[38] and are taken on a daily basis as tonics to enhance the innate protective response of the immune system.[39] What many do not consider, however, is how the selected mushroom parts, or the growth media, may enhance the benefits of these fungi.

The primary active constituents from medicinal mushrooms are polysaccharides known as beta glucans, which interact with the body’s immune system receptors, activating the complement system and enhancing the function of macrophages and NK cells.[40] The concentration of these beta glucans and other nutritional components vary widely among mushroom species and structural features, and are even influenced by culture (growth) media.[41],[42] Although total polysaccharides occur at high levels in the mycelium, the fruiting body (stem, cap, and gills) and spores have greater antioxidant potential.[43] Thus, the diverse array of potential benefits from mushroom products can be best experienced with products utilizing the fruiting body, alone or in combination with the mycelium, rather than the mycelium portion alone.

Water and alcohol extracts of maitake fruiting bodies have been shown to have a high free radical scavenging potential and beta glucan content,[44],[45] enabling them to deliver both antioxidant protection and innate immunity-enhancing effects.[46],[47] Studies show extracts from maitake enhance NK cell activity,.[52] The immune defense–enhancing effects of maitake, and maitake in combination with shiitake, were shown to be even more potent than those of a commonly used shiitake and basidiomycetes mushroom preparation.[53] A substantial array of research in animal models show these mechanisms of action translate to cancer-prevention benefits.[54]

Human studies also show extracts from maitake have a significant effect on immune system function. In female, postmenopausal breast cancer survivors, supplementation with maitake was shown to variably affect immune system function, with optimal dosing ranging from 5 to 10 mg/kg daily (depending on the desired effect).[55] However, in this short, three-week period, no clinical efficacy endpoint was evaluated. In cancer patients not taking anticancer drugs, maitake extract was shown to increase NK cell activity, reduce the expression of tumor markers, and hinder metastatic processes.[56] When added to chemotherapy, maitake enhanced immune cell activity and showed benefits in individuals with liver, lung, and breast tumors.[57] Finally, patients with myelodysplastic syndrome (a syndrome of ineffective erythropoiesis associated with bone marrow dysfunction) who received 3 mg/kg of maitake extract twice daily were shown to have enhanced neutrophil and monocyte function.[58]

The Immune-Strengthening Effects of Astragalus

Astragalus is one of the 50 fundamental herbs used in traditional Chinese medicine, considered a “toner of spleen qi.” Much of the research in both Chinese and Western medicine pertaining to astragalus is related to its effects on immune system function,[59],[60] including those related to cancer protection.[61],[62] Astragalus is also used in Chinese medicine for many cardiac issues, with positive clinical findings in congestive heart failure (CHF),[63] ischemic heart disease,[64] and settings of heart surgery.[65]

Although Astragalus membranaceus is the species of this family that has been most highly researched for its medicinal benefits, over 46 types of astragalus have been studied in recent years, being shown to be highly uniform in their composition of active constituents.59 Studies have shown that astragalus stimulates immune system function, reduces inflammation, and has antioxidant effects—mechanisms which translate to its liver-,[66] cardiac-,[67] and cancer-protective effects.[68] Studies have shown astragalus (or its active constituents) improve macrophage and neutrophil phagocytosis, seen in chronic viral (humans) or asthmatic settings.[73],[74]

In patients with CHF, treatment with astragalus has been shown to significantly increase CD4 levels and CD4/CD8 ratio, a parameter which not only reflects the strength of immune system response in those with HIV, but also may be associated with mortality in other settings.[75],[76] In patients experiencing acute exacerbations of chronic obstructive pulmonary disease (COPD), treatment with 15 mg of astragalus twice daily for 14 days, in conjunction with traditional clinical therapy (antispasmodic, expectorant, anti-asthmatic, and anti-infection treatments as indicated), was shown to significantly improve parameters of immune system function (CD4/CD8 ratio and NK cell levels) and decrease cytokines associated with inflammation (TNF-α, IL-8, and IL-1β) compared to the group not receiving astragalus.[77]

The King of Bitters, Andrographis

Andrographis (Andrographis paniculata) is a plant native to South and Southeast Asia that is revered in many medical traditions, including Ayurveda and Chinese medicine. It has many common names that convey its potential therapeutic properties, ranging from “King of Bitters”[78] to “Indian Echinacea.”[79] Considered a botanical with adaptogenic properties,[80] it has also been shown to modulate the response to stress. Beyond these things, it has clinical evidence of reducing triglycerides,[81] and anti-diabetic effects have also been seen in animal studies.[82]

The most well-known effects of andrographis, however, are with respect to the immune system. In vitro and animal studies have shown andrographis stimulates the nonspecific and antigen-specific immune response,[83] enhances NK cell activity and complement-mediated cytotoxicity,[84] and increases cytotoxic lymphocyte production and their response.[85] Yet it also has anti-inflammatory effects, having been shown to reduce levels of cytokines and chemokines associated with lipopolysaccharide (LPS)-induced immune system activation.[86],[87] Antioxidant effects have also been seen in multiple studies, possibly mediated by nuclear factor erythroid 2-related factor (Nrf2) activation.[88],[89]

Human studies have also shown an increase in immune system activity with andrographis, both acutely and with longer-term supplementation. Acute supplementation with a crude andrographis powder at a dose of 4.2 g daily for three days was shown to increase white blood cells and absolute neutrophil counts in healthy volunteers.[90] In patients with HIV, andrographis was shown at a dosage of 10 mg/kg daily to significantly increase mean CD4 lymphocyte levels from a baseline of 405 cells/mm3 to 501 cells/mm3 after three weeks.[91]

Therapeutically, andrographis has been clinically studied in settings of acute upper respiratory infections (URIs) and the common cold. In a randomized, double-blind, placebo-controlled trial (RDBPCT), adult patients with the common cold received 1,200 mg of andrographis extract or placebo daily for five days.[92] Evaluation of symptoms occurred at baseline, day two, and day four with a self-assessment questionnaire. At day two, significant decreases in intensity of tiredness, sleeplessness, sore throat, and nasal secretions were observed in the andrographis group as compared to placebo. At day four, significant decreases in all symptoms—which additionally included headache, earache, phlegm, and frequency and intensity of cough—were seen in the andrographis group, with no adverse effects being reported.

An improvement in the symptoms of and recovery from uncomplicated URIs has also been seen in RDBPCTs with short-term use of standardized andrographis extracts.[93] A systemic review of seven RDBPCTs investigating the use of andrographis for the treatment of URIs suggested andrographis had a superior effect to placebo in relieving the subjective symptoms of uncomplicated URIs as well as possible preventative effect.[94] Adverse effects were limited, being mild and infrequent.

As an immune system–modulating adaptogen, andrographis has also been studied in settings of autoimmune disease. In a 12-month study in patients with relapsing-remitting multiple sclerosis (RRMS) who were also being treated with interferon, treatment with 170 mg of andrographis extract twice daily was shown to significantly reduce Fatigue Severity Scores compared to placebo, with a 44% reduction at 12 months.[95] In an animal model of experimental autoimmune encephalomyelitis, andrographis was shown to reduce T cell activation and antibody response to myelin antigens.[96] Additionally, in patients with active rheumatoid arthritis (managed on stable doses of prednisone, chloroquine, and/or methotrexate), 100 mg of andrographis (containing 30% andrographolides) taken three times a day for 14 weeks was shown to significantly decrease the number of swollen joints, total grade of swollen joints, number of tender joints, and total grade of tender joints.[97] In conjunction with the improvements in symptoms, a reduction in rheumatoid factor level was also seen.

Although we often reflect that hindsight is 20/20, there are many times in life when we are able to sense the stress on our immune system prior to the development of a full-blown infectious illness or other immune system challenge. In these instances, support from substances such as the ones detailed in this article may help to mitigate or prevent the untoward changes to our healthy state.

[62] Auyeung KK, et al. Astragalus membranaceus: a review of its protection against inflammation and gastrointestinal cancers. Am J Chin Med. 2016;44(1):1-22.