Learn about the discovery of and research behind the natural fibrinolytic enzyme nattokinase and an array of clinical uses in these excerpts from “Potent Natural Anticoagulant Enzyme Derived From Traditional Japanese Food,” found in the January 2003 issue of FOCUS (Allergy Research Groups Journal), and “Nattokinase: A Potent and Safe Thrombolytic,” by Martin Milner, ND, found in the November 2008 issue of FOCUS.

“In all my years of research as a professor of cardiovascular and pulmonary medicine, natto and nattokinase represent the most exciting new development in the prevention and treatment of cardiovascular-related diseases” — Dr. Martin Milner

Nattokinase is a potent fibrinolytic enzyme extracted and highly purified from a traditional Japanese food called natto. Natto is a fermented, cheese-like food that has been used in Japan for over 1,000 years for its popular taste and as a folk remedy for heart and vascular diseases. Natto is produced by a fermentation process by adding Bacillus subtilis var. natto (formerly designated Bacillus natto), a beneficial bacteria, to boiled soybeans. The resulting nattokinase enzyme is produced when B. subtilis natto acts on the soybeans. While other soy foods contain enzymes, it is only the natto preparation that contains the specific nattokinase enzyme.

The Discovery of Nattokinase 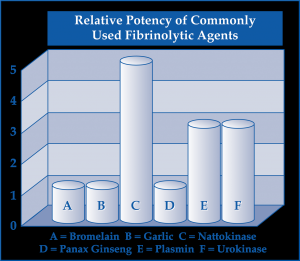 Dr. Hiroyuki Sumi had long researched thrombolytic enzymes, searching for a natural agent that could successfully dissolve thrombus associated with cardiac and cerebral infarction, and could degrade fibrin, which coagulates prior to full clot formation. Sumi discovered nattokinase in 1980 while working as a researcher and majoring in physiological chemistry at University of Chicago Medical School. After testing over 173 natural foods as potential thrombolytic agents, Sumi found what he was looking for when natto was dropped onto artificial thrombus (fibrin) in a petri dish and allowed to stand at 37°C (approximately body temperature). The thrombus around the natto dissolved gradually and was completely dissolved within 18 hours. Sumi named the newly discovered enzyme “nattokinase,” which means “enzyme in natto.” Sumi commented that nattokinase showed “a potency matched by no other enzyme.” (See Figure 1 for some comparisons to other substances commonly used to reduce clotting risk.)

The human body produces several types of enzymes for making a thrombus, but only one main enzyme for breaking it down and dissolving it: plasmin. According to Dr. Martin Milner, from the Center for Natural Medicine in Portland, Oregon, what makes nattokinase a particularly potent treatment is that it enhances the body’s natural ability to fight blood clots in several different ways. First, nattokinase closely resembles plasmin and dissolves fibrin directly. In addition, it also enhances the body’s endogenous production of plasmin and other clot-dissolving agents, including urokinase. (It has since been shown that nattokinase also decreases plasma levels of fibrinogen, factor VII, and factor VIII in humans.[2])

“In some ways,” Milner says, “nattokinase is actually superior to conventional clot-dissolving drugs. Tissue plasminogen activators (tPAs) like the drug urokinase are only effective when taken intravenously and often fail simply because a stroke or heart attack victim’s arteries have hardened beyond the point where they can be treated by any other clot-dissolving agent. Nattokinase, however, can help prevent that hardening with an oral dose of as little as 100 mg a day.”

The Prolonged Action of Nattokinase

Nattokinase has a prolonged action (unlike antithrombin drugs that wear off shortly after IV treatment is discontinued) for two reasons: it enhances the body’s endogenous fibrinolytic activity and it dissolves existing thrombus. By measuring the levels of euglobulin fibrinolytic activity and fibrin degradation products (which both become elevated as fibrin dissolves), researchers have determined that the activity of nattokinase lasts from eight to 12 hours.

Thrombolytic enzymes are normally generated in the endothelial cells of the blood vessels. As the body ages, production of these enzymes begins to decline, making blood more prone to coagulation and fibrin accumulation in the vascular endothelium. Eventually, this can lead to cardiac or cerebral infarction, as well as other conditions of the small or large vasculature.

Common thrombotic diseases include cerebral hemorrhage or infarction, myocardial infarction, angina pectoris, and senile dementia. Hemorrhoids are also considered a local thrombotic condition. If chronic diseases of the capillaries are also considered, then the number of thrombus-related conditions may be much higher. Cardiac infarction patients may have an inherent imbalance, with fewer necessary thrombolytic enzymes than procoagulant factors. Nattokinase holds great promise to support patients with such inherent weaknesses in a convenient and consistent manner.

The Benefits of Nattokinase on Blood Pressure

The traditional Japanese food natto has been used safely for over 1,000 years. Nattokinase has many benefits, including convenience of oral administration, confirmed efficacy, prolonged effects, cost effectiveness, and that it can be used preventatively. It is a naturally occurring, food-based dietary supplement that has demonstrated stability in the gastrointestinal tract, as well as to changes in pH and temperature. Natural agents such as nattokinase, which directly degrade fibrin, prevent its formation, and degrade clots, may have very broad applications in achieving optimum health.

I have now used nattokinase with around 300 patients. It is truly a multidimensional supplement, useful in each of the following:

Dr. Edwin Cooper has been studying earthworm immunity since the 1960s. He is the author/editor of more than 25 books and several hundred publications on comparative immunology and invertebrate immune systems. He co-organised the International Symposium on Complementary and Alternative Medicine in Kanazawa, Japan, in 2002. He has been awarded honoris causa doctorates from five American and European universities.

When the rains surge through Southern California, earthworms are washed out of the soil like confetti. I lift the worms onto grass so they can find their way home—these creatures whose potent medicinal properties I have spent 40 years studying are worth saving.

The earthworm’s antioxidant, immune-boosting, and clot-dissolving “medicine chest” is as powerful as that of any plant and even many pharmaceuticals. Earthworms have managed to survive for millions of years despite the constant threat of extinction by microbial pathogens. If we can begin to understand their remarkable capacities, we might design similar strategies to assist our own survival.

In research I did in Modena in the late 1990s, I discovered that earthworm leukocytes can recognise human cancer cells as foreign and then kill them. Electron microscopy showed the astonishing “cinematography” of earthworm cells becoming incredibly active, throwing out “pseudopodia,” and literally tearing apart cancer cell membranes from a human cell cancer line named K562.[6],[7] In fact, in all the time I’ve studied earthworms, I’ve never once been able to induce cancer in them.

The last 10 years have been a busy time for scientists exploring the medicinal treasures of earthworms. Laboratory, animal, and human studies have shown isolated enzymes and compounds from the earthworm to be potent fibrinolytics. Fibrinolytic enzymes have been purified and studied from several species of earthworm, including Lumbricus rubellus and Eisenia fetida, and have been shown to be both potent and safe.[8]

Earthworms are amazing in that they can kill bacteria and lyse foreign cells in spite of the fact that, unlike us, they have no adaptive immune system and do not form antibodies. Earthworms happily munch their way through garbage teeming with bacteria and fungi, and not only fight off infection but also alter that garbage so that their nitrogen- and mineral-rich castings transform it into fertile, oxygen-rich soil. And, as practically every curious child knows, you can slice some earthworms in half and they will regenerate.

The Key to Lumbrokinase: Active Only in the Presence of Fibrin

Lumbrokinase (LK) is a group of six novel proteolytic enzymes derived from the earthworm Lumbricus rubellus. These enzymes have potent fibrin-dissolving properties, decrease fibrinogen, lower blood viscosity, and markedly reduce platelet aggregation. Research suggests that LK may be effective in the treatment and prevention of ischemic heart disease, myocardial infarction, thrombosis of the central vein of the retina, embolism of peripheral veins, and pulmonary embolism.

One key, remarkable property of lumbrokinase is that, unlike the medications streptokinase and urokinase, it is only active in the presence of fibrin. Though it dissolves fibrinogen and fibrin very specifically, it hardly hydrolyses other important blood proteins such as plasminogen or albumin.[9] It has very low risks of causing hemorrhage due to excessive fibrinolysis.[10]

A 2001 study tested one of the six enzymes of LK to determine whether it passes into the blood from the intestines while maintaining its biological activity.[11] This research found that approximately 10% of the full-size enzyme could pass through the intestinal epithelium intact and into the blood. By delivering the enzymes in a format resistant to the harsh acids of the upper digestive tract, bioavailability may further be enhanced.

Clinical trials in humans have found LK to be safe and effective as a thrombolytic agent. Freeze-dried earthworm powder was given orally at a dosage of 120 mg to seven healthy volunteers aged 28 to 52 years old three times a day for 17 days.[12] Blood was drawn before the trial to establish a baseline, and then at selected intervals through the trial until the end of the study. Fibrin degradation products, tissue plasminogen activator (tPA) levels, and fibrinolytic activity were measured in the blood. The tPA levels and fibrinolytic activity gradually increased through the entire experiment.

In an even more significant study from Shanghai Medical University in 2000, LK was used in 51 patients who had suffered a stroke.[13] Several measures of blood viscosity were evaluated, as well as the Chinese stroke score. In the treatment group, tPA activity and D-dimer level increased and fibrinogen decreased significantly, while plasminogen activator inhibitor activity and prothrombin time were unchanged. This suggests that LK may not only be beneficial for ischemic stroke, but also that it may not increase the risk of excessive bleeding as anticoagulants can. (Since the original publication, a larger, multi-center study published in 2013 showed treatment of ischemic stroke patients with LK for one year reduced not only fibrinogen levels but also decreased vulnerable plaques and carotid artery intima–media thickness, among other things, compared to control.[14])

The Future of Earthworms as Medicine

We now know that earthworm enzymes may provide us with novel, potent, and safe approaches to the treatment of thrombosis. Since thrombosis is one of the main causes of death in the U.S. despite available drugs, the potential of LK is enormous. I think back to my boyhood, when I refused to fish so I would not have to inadvertently kill earthworms by using them as lure. But I never knew that my commitment to developmental biology and comparative immunology would lead me to study these simple, profound creatures.