Coeliac Disease and its Many Complications

Coeliac disease (CD), also called gluten-sensitive enteropathy or non-tropical sprue, is a unique autoimmune disorder which results from the interaction between gluten and immune, genetic and environmental factors. Originally CD was considered as a malabsorption syndrome of childhood, whereas it is now recognised as a disease which may be diagnosed at any age.

Gluten sensitivity is a new concept to define a condition of some morphological, immunological and functional disorders that withdraw with a gluten free diet in patients with or without HLADQ2/ DQ8 positive, with negative gluten-specific autoantibodies and without histological characteristic of coeliac disease (CD).

In a significant review paper published back in 2002 in the New England Journal of Medicine the  increasing prevalence of both Coeliac and Gluten sensitivity was discussed.[1]

Accounts of coeliac disease date back to the first century A.D.[2] It was not until the 1940s, however, that the link to gluten ingestion was established; Dicke, a Dutch paediatrician, observed that the condition of children with coeliac disease improved during the food shortages of World War II, only to relapse after cereal supplies were restored.[3]

Most commonly diagnosed present in Western Europe, North America and Australia, it is also found in many other countries and slightly more frequently in the female population.

This chart, extracted from the NEJM journal lists a surprisingly large number of linked conditions for those people as yet unaware of the many interrelated problems. However it does not list thyroid autoimmunity issues in the list, possibly as this is now 9 years old. Clinically, once a patient has been identified as having CD or Thyroid antibodies there should be a cross-diagnostic work up. Even gluten sensitivity may account for increased autoantibodies to the thyroid and reduced thyroid functionality, the symptoms of which may fully respond to a gluten free diet.[5] 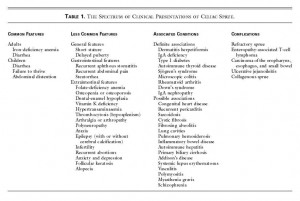 The mechanisms for clinical diagnosis have classically relied on the evidence of epithelial brush border loss as the defining sign, but these days as gluten sensitivity takes on an increasing importance in the clinical presentations of patients with reactivity to gluten there are increasingly sensitive investigations.

Classically, infants with coeliac disease present between the ages of 4 and 24 months with impaired growth, diarrhoea, and abdominal distension.[6] Vomiting is common in young infants, as are pallor and oedema. The onset of symptoms is gradual and follows the introduction of cereals into the diet. The velocity of weight gain slowly decreases before weight loss ensues. Some children present with constipation, although diarrhoea is more typical.

Patients with severe, untreated coeliac disease may present with short stature, pubertal delay, iron and folate deficiency with anaemia, and rickets. Atypical coeliac sprue is usually seen in older children or adolescents, who often have no overt features of malabsorption. In addition to recurrent abdominal pain, hypertransaminasemia, recurrent aphthous stomatitis, arthralgia, and defects in dental enamel, children may have behavioural disturbances such as depression, may be irritable, and may perform poorly in school.

The diagnosis of adults with coeliac disease is increasing. Some 20% of people diagnosed are over 60, and for every person diagnosed an estimated 8 others are missed or do not seek a suitable diagnostic work up. Many have been symptom free for most of their life suggesting that gluten sensitivity and coeliac disease can develop during adulthood.[7] The prevalence of coeliac disease in the general population is believed to be close to 1 in 300.

Many adults just present with episodic or nocturnal diarrhoea, flatulence, and weight loss. Enteropathy often also results in symptomatic lactose intolerance – so complications with all dairy foods feature as well. Steatorrhea (fatty stools) is associated with severe, extensive enteropathy, but it is often absent in patients whose disease is limited to the more proximal portion of the small intestine. Abdominal discomfort and bloating are common and often lead to a mistaken diagnosis of irritable bowel syndrome. Malaise and lassitude are also common even when anaemia is absent. Recurrent aphthous stomatitis may be the sole symptom at presentation.

Approximately 50 percent of adult patients do not have clinically significant diarrhoea. Iron-deficiency anaemia is now the most common clinical presentation in adults with coeliac disease. Other laboratory abnormalities include macrocytic anaemia due to folate (or, rarely, vitamin B12) deficiency, coagulopathy resulting from vitamin K deficiency, or vitamin D deficiency leading to hypocalcaemia and an elevated alkaline phosphatase level.[8] Other increasingly recognised extra intestinal manifestations include bone fractures,[9] infertility,[10] psychiatric syndromes,[11] and various neurologic conditions, including peripheral neuropathy, ataxia, and seizures.[12]

The incidence of CD is increasing across all age ranges and yet remains grossly underdiagnosed. Gluten sensitivity is a relatively recent refinement in which full blown CD is not diagnosable but exclusion from gluten containing foods promotes changes in objective markers and clinical symptoms. As Nutritional Therapists we need to remain very vigilant for patients who may be managing their lives whilst under the constant immunological burden of CD/GS and simply need appropriate guidance, testing and dietary changes to significantly improve their life.

Avoiding gluten is no small decision and many people use wheat as a catch all decision in their elimination programme, yet commitment to and avoidance of this gluten free diet is hard and more expensive than denial or inclusion.

Careful work ups, suitable investigations and trial exclusionary periods should all be undertaken with due care and consideration – remember also that simply avoiding gluten will not necessarily result in full resolution of symptoms due to cross reactivity to foods and persistently damaged and increased permeability of the gastric mucosa.