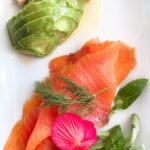 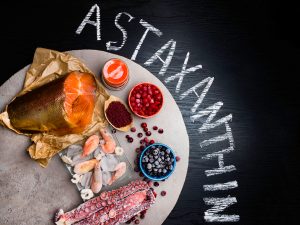 As astaxanthin is a fat-soluble carotenoid, absorption and retention of supplemental astaxanthin is much higher (the area under the curve being more than double) if taken immediately after meals rather than away from food.[10] Despite being a carotenoid, in mammals astaxanthin does not have any provitamin A activity.[11] Studies have shown supplementation of astaxanthin to be incredibly safe, with no significant side effects—although, like other carotenoids, it has the potential to affect the colour of the skin if taken at high doses for prolonged periods.6 That being said, such an effect has only been observed in animals, and doses of up to 100 mg as a single event and 40 mg daily for four weeks in humans were well tolerated with no skin changes or other adverse events reported.[12],[13] Because astaxanthin takes time to accumulate in the regions of the body where its benefits have been seen, clinical studies look at supplementation for a period of at least four weeks before re-evaluation of parameters.

Substantial clinical and preclinical research exists (a simple PubMed search for “astaxanthin” filtered by “humans” shows 365 publications, with approximately 50 being clinical trials) on the health benefits of this potent membrane-protective antioxidant, which also easily passes through the blood–brain and blood–retinal barrier.[14],[15] Numerous studies have shown astaxanthin supplementation may be beneficial for many of the processes and organs in the body that are challenged with aging: the brain, eyes, and skin.[16] Energy levels, mood,

With increasing age, we also experience the slowly declining function of many organs and systems, much attributable to oxidative damage and inflammation. Cellular senescence, the reduced ability for cells to grow and proliferate, typifies the aging process and is promoted by oxidative stress and other factors.[20] Therefore, it is not surprising that astaxanthin, with its ability to reduce oxidative damage,[21] promote healthy levels of inflammation,[22] and detoxify the body from environmental factors that trigger a pro-inflammatory and oxidative state,[23],[24] has been shown to help reduce changes we often see with aging.

Numerous studies point toward inflammation and oxidative stress as contributors to age-related cognitive decline and dementia.[25],[26] As a fat-soluble nutrient with an affinity for fatty tissues like the brain,[27] astaxanthin is an antioxidant of choice for cognitive health and neuroprotection.

The research behind astaxanthin as a nutrient that supports brain health is well summarised in a 2017 review published in the journal GeroScience:

“Evidence suggests that astaxanthin may be a useful compound in delaying or ameliorating cognitive impairment associated with normal aging or alleviating the pathophysiology of various neurodegenerative diseases.”14

Astaxanthin helps protect the brain against numerous insults, including aluminum23 (a central nervous system toxin linked with the development of Alzheimer’s disease),[28] tobacco smoke,24 chemotherapy drugs,[29],[30] and other toxic substances.[31],[32] It induces proliferation of neural progenitor cells and promotes neurogenesis and neuroplasticity,14,[33] each of which decline with increasing age. Astaxanthin increases levels of brain-derived neurotrophic factor (BDNF),[34] a growth factor that is important not only for nerve growth in the brain and periphery but also cardiovascular health.[35]

Multiple randomised, double-blind, placebo-controlled trials (RDBPCTs) have assessed the impact of astaxanthin on cognitive function. At a dosage of 12 mg/day, scores for the CogHealth test battery (a standardised test that assesses multiple domains of cognitive function), as well as maze learning rate, improved in individuals 45 to 64 years of age with complaints of age-related forgetfulness.[36] In another study of 45-to-64-year-olds (without cognitive complaints), at a dose of 8 mg/day, word recall was significantly improved in individuals under the age of 55 in the astaxanthin group compared to placebo.[37]

An additional RDBPCT found that the combination of 12 mg of astaxanthin with a low dose (20 mg) of tocotrienols significantly reduced perceived mental and physical fatigue, improving number of errors, clarity of thinking, concentration, motivation, and mood compared to placebo (tocotrienols only) in healthy subjects undergoing mental and physical challenge tests.[38] Finally, a RDBPCT assessed the impact of astaxanthin supplementation, at a dose of 6 or 12 mg/day, on levels of erythrocyte phospholipid hydroperoxides (PLOOH) (a phospholipid oxidation product possibly associated with neurodegenerative disease[39]), finding that, at both doses, this parameter significantly improved compared to placebo.[40]

Many age-related ocular health conditions are a result of ultraviolet (UV) exposure, which causes oxidative damage to the cornea, lens, and retina of the eye.[41],[42] Because of its accumulation in the eye,[43] and protection it offers against ocular UV damage,[44] the impact of astaxanthin on visual health has been studied in a variety of settings.

Animal studies have shown astaxanthin helps protect against photokeratitis,[45] cataract formation,[46] and retinal damage associated with increased intraocular pressure.[47] In humans, RDBPCTs have shown that astaxanthin, at a dosage of 6 mg/day, significantly improves visual accommodation and reduces symptoms of eye fatigue,(another indicator of eye health).[50] At a dosage of 12 mg/day, far visual acuity and choroidal blood flow were also observed to significantly improve.[51],[52]

Astaxanthin can also improve the health of the skin, another organ challenged by aging, as it protects against age-related changes, promotes wound healing, and helps mitigate inflammation and cellular damage due to UV light exposure.[53],[54] In animal studies, astaxanthin has been shown to reduce UV-induced inflammation and apoptosis,44 ,[55] as well as increase the amount of collagen and growth factors,[56],[57] which can enhance wound healing and improve age-related changes.

In numerous human studies, oral supplementation of astaxanthin at a dose of between 2 to 12 mg/day (most often 6 mg/day) has been shown to reduce various parameters related to wrinkles, increasing skin elasticity and moisture content.44 In one of the larger RDBPCTs, the impact of dosage was also investigated, finding that 12 mg was more effective than 6 mg in reducing inflammation; however, both doses significantly reduced wrinkle parameters and improved moisture content.[58] In an open-label pilot trial, supplementation of astaxanthin at 6 mg/day was also shown to improve age spot size and skin texture.[59]

Although there is no denying the governance of Father Time, at least we have tools like astaxanthin to help us maintain our youthful capabilities, appearance, and vigour and improve our healthspan (the period of one’s life that one is healthy, or, at least, free of serious disease[60]).

[4] Capelli B, et al. Synthetic astaxanthin is significantly inferior to algal-based astaxanthin as an antioxidant and may not be suitable as a human nutraceutical supplement. Nutrafoods. 2013 Dec 1;12(4):145-52.

[9] Bjerkeng B. Chromatographic analysis of synthesized astaxanthin—a handy tool for the ecologist and the forensic chemist? The Progressive Fish‐Culturist. 1997 Apr;59(2):129-40.

[39] Yamashita S, et al. Alterations in the Levels of Amyloid-β, Phospholipid Hydroperoxide, and Plasmalogen in the Blood of Patients with Alzheimer’s Disease: Possible Interactions between Amyloid-β and These Lipids. J Alzheimers Dis. 2016;50(2):527-37.

[55] Imokawa G. The Xanthophyll Carotenoid Astaxanthin has Distinct Biological Effects to Prevent the Photoaging of the Skin Even by its Postirradiation Treatment. Photochem Photobiol. 2019 Mar;95(2):490-500.

[60] Peterson T. Healthspan Is More Important Than Lifespan, So Why Don’t More People Know About It? Institute for Public Health, Washington University in St. Louis. 2017 May 30.

Previous Post
Safe, Effective, and Natural Solutions to Mood Disorders
Next Post
Are You Nitric Oxide Deficient? Part 1 of 2