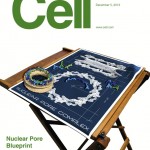 A very exciting paper published in the journal Cell has identified (in an animal model) the ability of commensal bacteria to reverse autistic behaviours, reinforcing the indications explored by us in the blog over the last few years that the relationship between brain and gut is in part mediated by organisational complexity and competence in the gut microbiota. This looks to be an exciting investigation that will build on many others works.[1]

Doses of a human gut microbe helped to reverse behavioural problems in mice with autism-like symptoms, researchers report today in Cell. The treatment also reduced gastrointestinal problems in the animals that were similar to those that often accompany autism in humans.

Neurodevelopmental disorders, including autism spectrum disorder (ASD), are defined by core behavioural impairments; however, subsets of individuals display a spectrum of gastrointestinal (GI) abnormalities. We demonstrate GI barrier defects and microbiota alterations in the maternal immune activation (MIA) mouse model that is known to display features of ASD. Oral treatment of MIA offspring with the human commensal Bacteroides fragilis corrects gut permeability, alters microbial composition, and ameliorates defects in communicative, stereotypic, anxiety-like and sensorimotor behaviours. MIA offspring display an altered serum metabolomic profile, and B. fragilis modulates levels of several metabolites. Treating naive mice with a metabolite that is increased by MIA and restored by B. fragilis causes certain behavioural abnormalities, suggesting that gut bacterial effects on the host metabolome impact behaviour. Taken together, these findings support a gut-microbiome-brain connection in a mouse model of ASD and identify a potential probiotic therapy for GI and particular behavioural symptoms in human neurodevelopmental disorders. 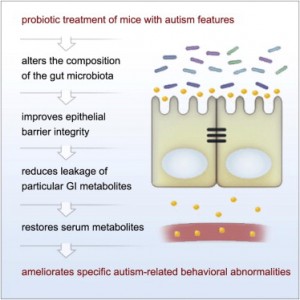