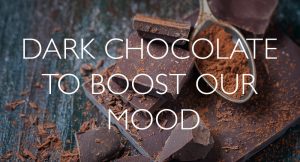 University College London (#UCL) have led a study into the mood boosting effects of #chocolate. For some time, it has been known to include #orosensory properties, #psychoactive ingredients, and an activation of #neural #reward pathways, but there has been limited high quality research to prove this. #Flavonoids have also been shown to have a positive effect on mood and are found in far higher quantities in dark chocolate than milk, yet no previous study has investigated this association. This research aimed to examine the relationship between chocolate consumption and symptoms of depression with  data from 13,626 adults in the United States.

The World Health Organisation estimate that more than 300 million people worldwide are affected by #depression. With limited availability for psychotherapies the main treatment option tends to be antidepressants, though patients are often reluctant to continue taking these. Growing evidence to suggest we can control some depressive symptoms through #lifestyle changes can provide an attractive alternative for those with subclinical symptoms who are unable to access formal treatment. #Exercise has been well documented to aid depressive symptoms; further evidence is becoming rapidly available to show our diets can also influence our mood. If chocolate can be one of these influential foodstuffs it provides a simple and pleasurable addition to our lifestyle.

After adjusting for factors such as weight, marital status, ethnicity, education and income the study focused on only measuring the effect of the chocolate on depression. The results found that individuals who reported eating dark chocolate in two 24-hour periods had 70 per cent lower odds of reporting clinically relevant depressive symptoms compared to those who had not eaten chocolate at all. Researchers found no significant links between non-dark chocolate consumption and clinically relevant depressive symptoms. Dr Sarah Jackson, who led the study, highlighted the need for further research to understand the biological mechanism behind the process in order to determine the type and amount of chocolate consumption needed for optimal depression prevention and management. Whilst further research is needed this study provides good news for dark chocolate lovers!