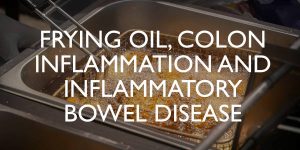 The University of Massachusetts have conducted new research into the impact of #frying oil consumption on inflammatory bowel disease (#IBD) and #colon #cancer, using animal models. The study was published in Cancer Prevention Research (23rd August 2019) and showed that feeding frying oil to mice exaggerated colonic inflammation, enhanced tumour growth and worsened gut permeability which spread bacteria into the bloodstream. With an estimated 300,000 people living with colonic inflammation in the UK this research is vital in highlighting ways in which we can prevent the disease from advancing.

Researchers aimed to mimic a human diet and used canola oil, widely used for frying, in which falafel had been cooked at 325F in a standard commercial fryer. A combination of the frying oil and fresh oil was added to the powder diet of the study group of mice, the control group were given the powder diet with only fresh oil mixed in. The researchers then looked at the effects of the diets on colonic inflammation, colon tumour growth and gut permeability, finding that the frying oil diet worsened all the conditions, with tumours doubling in size from the control group to the study group.

On analysis of the oil the scientists hypothesised that it was the process caused by heating the oil, the #oxidation of the #polyunsaturated fatty acids, that was instrumental in its inflammatory effects. In order to test this, they isolated polar compounds from the frying oil and fed them to the mice, these results proved very similar to those of the group fed the frying oil. More research is obviously needed on the effects of frying oil on the human colon, but associate professor Guodong Zhang, who helped lead the study concluded that, for those with or prone to inflammatory bowel disease “it’s probably a good idea to eat less fried food” (which is a perfectly reasonable suggestion whether you have IBD or not!)