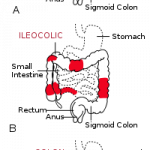 In numerous earlier posts I have explored the emerging evidence as well as the historical experiences for the use of faecal microbial transplantation (FMT) and the management of complex dysbiotic gastrointestinal tracts: this is also sometimes called faecal transplant therapy (FTT)

Whilst the greatest amount of data on this therapy is available with reference to the successful (>92%) treatment of clostridium difficile infection, others have been exploring its potential treatment in regard to other complaints related to dysbiosis of the gastrointestinal flora.

FMT via enema it appears may be effective, tolerable, and a feasible way for treating children with ulcerative colitis (UC), according to findings from a phase 1 pilot study published online March 29 and in the June issue of the Journal of Pediatric Gastroenterology and Nutrition. FMT involves infusion of human stool from a healthy adult donor into the patient’s intestine.[1]

Before I discuss the relative importance of this trial; a quick reminder about the frequency of the two main types of inflammatory bowel disease, Crohn’s and ulcerative colitis and some of the explanations for the aetiopathogenesis.

Incidence of IBD is rising globally and it stands to reason that the driving forces behind the rise of IBD in developing nations are environmental factors, as these nations have undergone tremendous economic and social growth.

The two most well-established risk factors for IBD, smoking and appendectomy, cannot fully account for all variations in IBD incidence and prevalence. For instance, the incidence rate of CD is high in some populations with a relatively low prevalence of adult smokers (Sweden, Canada), and is low in populations of heavy smokers (Asia, Africa). Appendectomy also cannot explain the worldwide incidence of UC; rates of appendectomies have decreased in developed countries, whereas the incidence of UC has remained constant or even decreased. By far the most topical and likely factors that may explain geographical variability and the rising incidence in developing countries and urban areas are differences in diet, with downstream effects on the intestinal microbiota, exposure to sunlight or temperature differences, improving socioeconomic status and hygiene, which in isolation or even combination could account for variations and emerging trends in IBD epidemiology worldwide.

Meta-analyses confirmed that in Caucasian populations, smoking is an important environmental risk factor in IBD, with opposite effects on UC (OR 0.58) and CD (OR 1.76),[2] whereas in other ethnic groups with different genetic susceptibility, smoking may play a lesser role. It is likely that smoking does not cause CD but modulates the disease once present.

Global variation in dietary habits probably explains the differences in the risk of IBD across geographical regions and the increase in disease incidence in migrant and developing populations. However, the effect of diet on the risk and clinical course of IBD has not received as much research attention as is probably warranted. In studies from Europe, the most consistent dietary association linked to the development of IBD, particularly for CD, is increased sugar intake.[3] Dietary antigens very likely play a role in the expression of IBD. Prospective studies suggest that a diet high in protein, particularly animal protein, is associated with a higher risk of IBD. Intake of the n-6 polyunsaturated fatty acid linoleic acid may confer risk, whereas n-3 polyunsaturated fatty acids may be protective for UC.[4]

The dysbiosis reported in IBD is likely to be a consequence of changes in environment including hygiene and food, resulting in an imbalance in the microbial–host relationship with mucosal barrier dysfunction and reduced microbial diversity. It has been postulated that dietary fructose, sucrose, animal fat and iron preferentially stimulate the growth of pathogenic bacteria, while poorly absorbed oligosaccharides promote the growth and metabolic profile of beneficial bacteria.

The composition of the intestinal microbiota has been proposed as an important factor in the development of IBD. Antibiotics have the potential to alter the composition of the intestinal microflora, especially during the first year of life, as this is the period of stabilisation for commensal gut flora in the newborn. Although cumulative data suggest a possible triggering role of antibiotics in the onset of IBD, as with any observational study, causality or biological mechanisms cannot be inferred from these results.[5]

Studies from Europe suggest that low sunlight exposure may contribute to the pathogenesis of IBD, although the exact mechanism for this is not clear. It has been hypothesised that people in sunnier states may have higher exposure to ultraviolet light, leading to higher vitamin D levels, which help to regulate immunity and inflammation. A link between latitude and incidence rates of CD and UC has been supported by a large prospective study from the USA.[6]

Of all factors identified, not a single one alone may, up to now, totally explain the worldwide epidemiology of IBD. This is partly due to a multiplicity of potential routes for disturbances in the interactions between microbe and host. Some issues studied may not be factors in themselves but rather markers for other unidentified influences. It is highly likely that genetic influences critically determine the role that individual environmental factors may play in triggering disease. It is also possible that the strength of influence by risk factors or lack of protective factors in a society is different, depending on geography or urbanisation.[7]

“We believe that the procedure may restore ‘abnormal’ bacteria to ‘normal’ in patients with [UC]. Our short-term study looked at the safety and tolerability of FMT for these patients.” – Sachin Kunde, MD, MPH.

At baseline, paediatric UC activity index (PUCAI) ranged from 15 to 65. The investigators considered a reduction in PUCAI by more than 15 to be clinical response, and PUCAI lower than 10 to be clinical remission.

There were no serious adverse events. Self-limiting adverse events were mild cramping, fullness, flatulence, bloating, diarrhoea, blood in the stool, and moderate fever. Although 1 child could not retain faecal enemas, average tolerated enema volume in the other 9 children was 165 mL/day.

Clinical response within 1 week occurred in 7 (78%) of the 9 children, including 3 (33%) who had clinical remission and 6 (67%) who maintained clinical response at 1 month. Compared with baseline, median PUCAI significantly improved after FMT (P = .03)

Limitations of this study include its open-label design, small sample size, and lack of faecal and mucosal microbial community profiling. The investigators recommend future studies with a larger sample size and longer follow-up period. However, this is a low cost treatment and whilst paediatric populations are deemed to have more pliable microbial populations than adults, it is likely that this may also offer a route to resolution to older sufferers, but that may require longer therapy.

Previous Post
The Forgotten Therapeutic Applications of Castor Oil
Next Post
Nonalcoholic Fatty Liver Disease (NAFLD), Why We Need To Be Responsive.