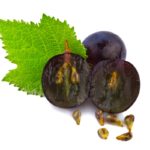 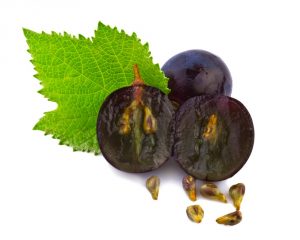 Grape seed extract by no means is “new” to the nutraceutical world, however, we are learning more about the potential broad benefits of this antioxidant-like nutritional compound, and starting to gain broader knowledge of mechanisms by which individual responses to this substance may vary. Grape seed extract is high in antioxidants in the form of polyphenols, which contribute to its potential therapeutic action.[i]  Resveratrol, the grape’s greatest claim to fame, is found primarily in the skins of grapes, with gallic acid, catechin, and epicatechin being the main polyphenols found in GSE.[ii] The amount of each of these substances in Grape seed extract varies widely by the variety of grape from which the seeds are sourced. Studies have shown that some of the compounds sourced from grapes, such as catechin and epicatechin, have a synergistic antioxidant effect.[iii]

The bioavailability of polyphenols varies, and studies have shown that there is very little relation between the quantity of polyphenols in foods and their bioavailability in human body.[iv] One of the factors that plays a significant role in the absorption and availability of these compounds is the intestinal micro-environment – the enzymes present and the intestinal flora.[v] In the process of absorption, polyphenols are modified significantly, being conjugated both in intestines and the liver by methylation, sulphation and/or glucuronidation.[vi] Thus, quantifying bioavailability also requires assessing various metabolites and their levels in blood as well as the tissues. Many of these metabolites may possess more bioactivity than their precursors, shedding light on the importance of their quantification.[vii] Polyphenols also impact the balance of gastrointestinal flora, a mechanism by which their effects may be seen, but also another factor which may contribute to variable bioavailability.[viii] In circulation, polyphenol metabolites bind to blood proteins, primarily albumin, which also affects their bioavailability in the tissues.[ix] Studies suggest that some albumin-bound polyphenols are capable of having biological activity, but it is unknown if this is true for all polyphenols or if these substances need to be in their free, unbound form.[x],[xi]

The polyphenols derived from Grape seed extract are no different from the group as a whole, and we are starting to understand that the variability that has been seen in the efficacy of these compounds for a variety of conditions such as hypertension may be due to differences in metabolism and biological levels of the bioactive metabolites. A wide variety of factors have been shown to influence this, including gender,[xii] age,[xiii] and health status.[xiv]

Age, as a second factor of consideration, also has been shown to contribute to significant differences between young and older (adult) rats.13 Factors which are anticipated to impact polyphenol metabolism with age are gastrointestinal bacterial population, liver and kidney function as well as circulatory volume, and expression and activity of xenobiotic metabolizing enzymes.[xvii] In a gender-limited population of male rats, total flavanol concentration in plasma was found to be about 3 times lower in adult rats than that of the young rats in the 2 – 7 hour time period after dosage. However, the older rats were shown to have much higher concentrations of GSE microbial metabolites at all time points, suggested to be because reduced absorption in the small intestine allowed more of the GSE compounds to reach the large intestine intact and available for microbiota metabolism. Additionally, the plasma levels of phase II flavanol metabolites were found to decrease much faster in young rats.

Finally, health status also has been shown to impact Grape seed extract flavanol bioavailability and metabolism.14 In spontaneously hypertensive rats, oral administration of Grape seed extract was shown to lead to a significant reduction in blood pressure at 6 hours post-consumption, while it didn’t impact the blood pressure of healthy rats. Although total plasma flavanol metabolites showed similar levels, quantitative and qualitative differences in microbial metabolites were shown in the healthy and disease state. The most noteworthy differences were plasma gallic acid levels, which were found to be approximately 10 times more concentrated in diseased rats, and methyl-epicatechin-O-sulfate which was 4 times higher in diseased than in healthy rats.  Additionally, some flavanol microbial metabolites were shown to be increased in the aortas of spontaneously hypertensive rats compared to healthy rats, although aorta total concentrations were lower in the diseased rat population.

The more we understand the impact that our microbiota has on our health, the more this understanding opens up further study of how diet and botanically derived substances may affect us each, individually.[xviii] There is no doubt that studies such as this will continue to further pique our interest in further understanding of the impacts of nutritional substances on our health, and in cases such as GSE more directed application of these findings.

Previous Post
Air Pollutants – Are They Truly a Health Issue?
Next Post
Adrenal Fatigue, Adrenal Insufficiency, or A Misnamed State of Hypofunction?