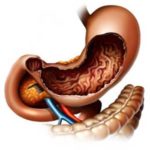 Comment: Nearly 20 years ago, it was discovered that bacteria known as Helicobacter pylori were responsible for stomach ulcers. Since then, antibiotics have become the primary therapy used to combat the H. pylori infection, which affects approximately six percent of the world population and is also a primary cause of stomach cancer. But today the bacteria is growing increasingly resistant to antibiotics.

Now a study led by scientists at Beth Israel Deaconess Medical Centre (BIDMC) and the Massachusetts Institute of Technology demonstrates that the amino acid glutamine, found in many foods as well as in dietary supplements, may prove beneficial in offsetting gastric damage caused by H. pylori infection. Reported in the May 2009 issue of the Journal of Nutrition., the findings offer the possibility of an alternative to antibiotics for the treatment of stomach ulcers.

H. pylori bacteria infect more than half of the world’s population and were recently identified as a Group 1 carcinogen by the World Health Organization. Approximately 5.5 percent of the entire global cancer burden is attributed to H. pylori infection and, worldwide, over 900,000 new cases of gastric cancer develop each year. The possibility that an inexpensive, easy-to-use treatment could be used to modify the damaging effects of H. pylori infection warrants further study in clinical trials.