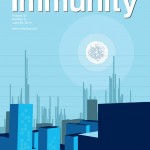 It must be explained at this point that the bacteria is not acting as an infectious agent – no mouse is developing arthritis because they have ‘caught’ a bug in this case. Rather this is where their genetic susceptibility has been adversely expressed by virtue of a change in the microbial composition in the gut. It is a disease outcome derived from an internal interplay between the genetics of the host and the bacterial environment it supports.

The reason the bacteria can induce arthritis in a genetically sensitive host is complex, but essentially the segmented filamentous bacteria (SFB) cause the animals to produce more of a particular subset of T cells called Th17 cells. The immune system reacts to the activity of the T cells as if to a foreign threat and produces auto antibodies that trigger the devastating disease. Th17 cells are one of a newly recognised T cell family that are providing distinct links between the gut and the CNS as well as other organs and tissues. They are natural self defence cells acting against bacteria, viruses and candida species through the production of a cytokine called IL17.

The bacteria involved are known as segmented filamentous bacteria, these are gram positive (refers to bacteria that have a single cell wall that does not contain lipopolysaccharide; these bacteria retain a violet stain when rinsed), spore-forming obligate anaerobes that have not yet been successfully cultured in vitro.[3] Most closely related to Clostridia, and provisionally designated Candidatus arthromitus.

The relatively surprising finding was that bacteria in the gut could influence the development of an autoimmune disease affecting tissues distant from the gut. Diseases such as irritable bowel syndrome have been linked to gut-residing bacteria, but this study is unique in showing the mechanism by which a bacterium in the gut can influence the development of an autoimmune response that ends in inflammation and pain in the joints.

Commensal microflora has long been recognised to have a variety of beneficial effects on host development and physiology. The composition of the microbial communities that colonise humans, particularly in the lower gastrointestinal tract, is difficult to evaluate because many commensal bacteria are unculturable obligatory anaerobes. However, studies have begun to demonstrate remarkably specific and profound effects of seemingly subtle variations in microbial composition on host immunity and susceptibility to diseases.[4]

In addition, the innate immune system may have a role in the defense against noninfectious noxious insults, such as toxic xenobiotics, environmental irritants and venoms.[5]

The clinical selection of prebiotics and probiotics has traditionally been constructed around the concept of ecological manipulation, that is that the use of a pro, or friendly bacterium would act positively regardless of the microbial mechanisms involved.

The evolving comprehension of mucosal immunity and probiotics and prebiotics is that each strain has a unique impact on the receptors in the immune system, which in turn are affected by their genetic composition and by the ecological balance. As Nutritional Therapists looking to impact on a specific state of altered health a careful selection of probiotics and allied therapies is required to simply avoid the non specific practice of indiscriminate probiotics supplementation that has no significant clinical endpoint and produces a disappointing outcome for practitioner and patient.

This is an exciting albeit complex area of therapy that has for a long time been managed by the idea that all probiotics are safe, whilst that is true where the patient has no underlying pathology, the difference between ‘safe-ish and benign’ outcomes and ‘safe and positive’ outcomes is what defines the effective practitioner and satisfied patient.