Nutrient Composition of Fish Around the World 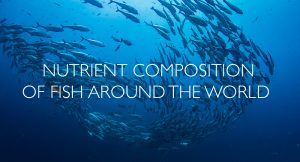 Scientists from the ARC Centre of Excellence for Coral Reef studies at James Cook University (Coral CoE at JCU), have found that 50% of coastal countries- mainly in Africa, Asia, the Caribbean, and the Pacific- have moderate to severe nutrient deficiency. They are now part of an international team of researchers to have found that children in these areas could have substantial health improvements if they were able to consume just a small proportion of the fish caught nearby.

Fish provide us with an important source of protein as well as #omega-3 fatty acids, and #micronutrients such as #iron, #zinc, and #calcium and as a result help to prevent nutrient-deficiency diseases, the leading cause of infant deaths worldwide. Yet many of the countries where these diseases are most prevalent also have fisheries capable of producing an excess of nutrients to feed all their children under five; the most nutritionally vulnerable part of the population. The study by Coral CoE at JCU calculated the micronutrient richness of 350 fish species worldwide and developed a statistical model to predict how much nutrition any fish found would contain. They used the model to quantify the global distribution of nutrients available from existing marine fisheries and then compared them with the prevalence of nutrient deficiencies around the world.

Researchers found the problem greatest for countries on the north western coast of Africa, where fishing fleets from the European union, Russia and East Asia have led to local fish scarcity and price increases that have made it an inaccessible product to locals. Surprising statistics were also found in other parts of the world, one example from the islands of Kiribati in the central Pacific Ocean, showed that people living there have an 82% risk of calcium deficiency. Yet if just 1% of the fish caught from its seas were given to the locals it would provide all the calcium required for every child under 5 years old. There is not a need to produce more, instead we need to focus on distributing nutrients globally, with fairer supply chains better able to benefit local populations. This would have the added benefit of food having fewer travelling miles. Co author Dr David Mills concluded,

“As the demand for ocean resources increases up to the limit of what can be harvested sustainably in many instances, research initiatives like this show that there are opportunities to fish and distribute fish strategically to address fundamental challenges to human health and wellbeing,”