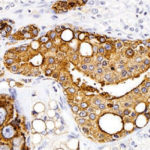 Last October 2009 the journal Science published a paper suggesting that a virus could be linked to CFIDS as well as prostate cancer. This was commented on in this site. Initial enthusiasm for this potential pathogen explanation for the chronic and debilitating condition has taken a couple of knocks as two papers have questioned the link. Scientists in the initial study found DNA traces of a virus in the blood cells of two-thirds of 101 patients with CFIDS, compared with 4% of 218 healthy controls. XMRV is a rodent retrovirus also implicated in an aggressive prostate cancer, though why it might cause or be associated with CFIDS remains unclear.

This naturally seemed to provide a plausible association with an infectious agent that would mesh with the common development of the condition following a viral infection.

Concerns over the American groups results and relationship to a test for XMRV had a UK virology group recheck samples. The team, led by Myra McClure, a professor of retrovirology at Imperial College London, examined DNA from the blood of 186 CFIDS patients ranging in age from 19 to 70, with an average age of 40. Most were markedly unwell. McClure’s team used a PCR machine–which copies and amplifies scraps of DNA–to search for two viral sequences, one from XMRV and the other from a closely related virus. They discovered nothing. [1]

Does this invalidate the matter, well XMRV could show more genetic variety, and so be harder to detect, than anyone assumed. It’s also possible that distinct strains of XMRV appear in different parts of the world, like the retroviruses HIV and HTLV (a leukemia virus). Meaning both groups may be correct.

However another study recently published by researchers from the U.K. National Institute for Medical Research also challenges the XMRV link, using PCR machines to hunt for DNA of the mouse virus in human tissue. Published on the 15th  February in Retrovirology, they found no trace of the DNA in 299 samples taken both from CFS sufferers and healthy control patients. [2]

The team also looked at blood serum from 565 people to see if they could identify signs of an immune response to XMRV. In this approach, the scientists did discover antibodies that fight XMRV in 26 people. However, only one of those people has CFS. The significance isn’t clear, because the same antibodies can defend against other, related viruses, and the specific trigger in this case remains unknown. The main conclusion the authors draw is a firm maybe: “XMRV infection may occur in the general population, although with currently uncertain outcomes.”

This leaves researchers, clinicians, practitioners and sufferers in a quandry, for despite there being no treatment option for a positive XMRV virus, there was a sense that a plausible explanation, which in turn would allow mechanisms to be eluciadated would provide opportunity for treatment.

It may be that like many conditions there are many causative agents and that a subset of CFIDS patients with be related to XMRV and others to different triggers.