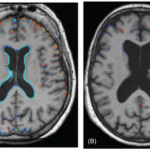 There is a growing awareness that brain atrophy is a miserable consequence of aging and when combined with loss of mental function it makes for a very unattractive outcome. The paper out in September 2010 from the research team at Oxford showed that moderate doses of the supplement containing B Vitamins: Folic acid (0.8 mg/d), vitamin B12 (0.5 mg/d) and vitamin B6 (20 mg/d) over 2 years could halve the rate of brain shrinkage – a physical symptom associated memory loss and dementia in the elderly.[1]

At the end of the trial the effects of the vitamin treatment were found to be dramatic, and most pronounced in participants who started out with the highest rates of brain shrinkage.

On average, taking B vitamins slowed the rate of brain atrophy by 30%, and in many cases reductions was as high as 53% were seen.

The key findings were:

The use of supplements to manage the effects of adverse homocysteine metabolism[2] has been a primary part of Nutritional Therapy and Functional Medicine for the last 10 years or more and whilst there is clearly a pharma orientated spin on this particular paper, it does continue to support the practical interventions that we as Nutritionally Orientated Practitioners are familiar with. We would also consider the use of N-acetylcysteine in the plans for reducing neuroinflammation and reducing progression towards Alzheimer’s or reducing the symptoms if possible.[3]

The proposed reductions in the availability of upper limits of nutrients except via medical supervision may be some way off just yet, but we can see that there may well be a change in tack – from attacking nutritional therapy – to supporting it where there may be substantive control exerted over who has access to this type of product –i.e only through Medical Practitioners rather than through practitioners or direct to public.

Professor David Smith, pharmacologist and co-author of the research published in the journal PLoS ONE, said the results were “immensely promising” and that “it is a very simple solution: you give someone some vitamins and you protect the brain”.

Brain atrophy, describes the loss of neurones and their connections, can be caused by a number of diseases. Some degree of atrophy and subsequent brain shrinkage is common with old age, even in people who are cognitively healthy. However, brain shrinkage is accelerated in people with mild cognitive impairment and even faster in those who ultimately progress from mild cognitive impairment to Alzheimer’s disease. A range of factors has been implicated in affecting the rate of brain atrophy, one of which is high levels of an amino acid in the blood called homocysteine (tHcy). Studies have shown that raised levels of tHcy increase the risk of Alzheimer’s disease.

We have recommended the product below; at which 2 per day meets and exceeds the doses used in the trial as has been used successfully in clinics for the reduction of increased plasma homocysteine for over 10 years.

Treatment with vitamin B tablets had notable effects on the levels of tHcy in the blood, reducing it by 22.5%. Levels of tHcy increased by 7.7% in the placebo group. Overall, treatment with B vitamins for a period of 24 months led to a reduction in the rate of brain atrophy. The results were better with higher compliance and there were no adverse effects – confirming as usual that the use of concentrated nutrients represent a very good risk to reward ratio.