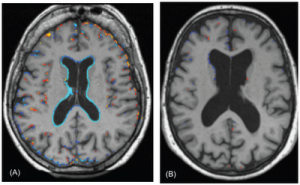 The rate of whole brain atrophy was significantly less in the vitamin B complex treated group. The figure above courtesy of Plos One shows the brain of one female participant on placebo (left) and one female participant on vitamin B complex on the right. Blue areas indicate areas of brain atrophy. Rates of atrophy were .76% per year in the vitamin B group and 1.08% in the placebo group--a highly statistically significant reduction (p value<.001).

There is a growing awareness that brain atrophy is a miserable consequence of aging and when combined with loss of mental function it makes for a very unattractive outcome. The paper out in September 2010 from the research team at Oxford showed that moderate doses of the supplement containing B Vitamins: Folic acid (0.8 mg/d), vitamin B12 (0.5 mg/d) and vitamin B6 (20 mg/d) over 2 years could halve the rate of brain shrinkage – a physical symptom associated memory loss and dementia in the elderly.[1]

At the end of the trial the effects of the vitamin treatment were found to be dramatic, and most pronounced in participants who started out with the highest rates of brain shrinkage.

On average, taking B vitamins slowed the rate of brain atrophy by 30%, and in many cases reductions was as high as 53% were seen.