Whilst the recognition has existed for many years that deficiency in nutrients and vitamins compromises immune function, some gaps have existed in our understanding.

Whilst I have covered the role of the lipid soluble vitamins A and D in various articles in terms of their immune modulating effects, a research paper out in the Nov 2012 Journal, Nature helps to expand some of the relationships between certain B vitamins and immune functionality.[1]

Does Folic acid during pregnancy have any beneficial effects on the mood state of the mother, during pregnancy, immediately post-partum or later. This study published in the European Journal of Clinical Nutrition[1] implies that it does, but that we have to wait almost 2 years to identify the impact – that seems a very long time to me, and does not indicate that this should be considered a sensible supplementation if post-partum depression management is your goal. Single nutrient therapies, whilst attractive from an intervention study perspective, fail time and again to modify complex disorders. Humans have the annoying reality of multiple points of impact; nutritional supplementation needs to be considered as a therapeutic intervention in line with food intake, body mass, social experiences, competing nutrient stealers, such as alcohol etc.

Folic Acid – What Dose is Safe? 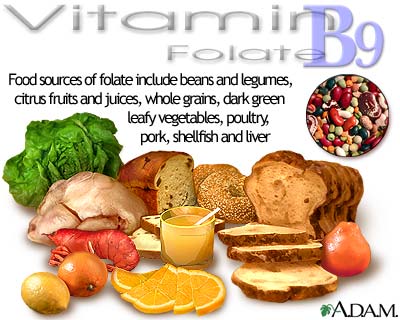 Folic acid supplementation, the synthetic form of folate has been thrown a curve ball in the last few years because of its apparent association with an increase in colorectal cancer. In particular three papers have been flagged up; the first is by Cole[1] and his colleagues and the second by Mason[2] and the third by Hirsch.[3]

The first paper describes the results of a randomised trial of folic acid in the prevention of colonic adenoma (a type of benign colon tumour that can become malignant), where the subjects had previously had adenomas removed. In this paper the results have been incorrectly interpreted. The study does not show that folic acid supplementation poses a cancer hazard, it relates to adenomas not carcinomas – the malignant form. The actual incidence of adenomas in those who were supplemented vs. those who were not are virtually identical in the following two 3-4 year follow ups. The relative risks were 1.04 (p=0.58) and 1.13 (p=0.23).

Research: In this study, researchers measured blood levels of total homocysteine ((t)Hcy), vitamin B(12) and folic acid in patients with Parkinson s disease (PD) and in age-matched controls, and searched for possible associations between these levels with smoking, alcohol consumption, L-DOPA treatment and disease duration in PD patients.