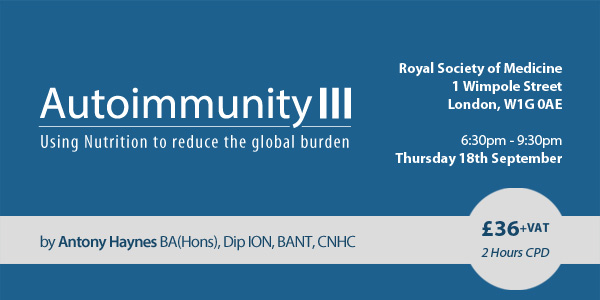 Many people discover later in life that they have developed an illness that falls into one of the autoimmune categories, and may subsequently seek assistance from practitioners skilled in the use of nutrition as a therapeutic intervention. Whilst over 80 such conditions are currently recognised a central theme is emerging in the scientific literature, that the health of the bacterial communities in our digestive tract and the supporting tissues are compromised, suggesting a possible causal link.

Autoimmune diseases have increased dramatically worldwide since World War II. This is coincidental with the increased production and use of chemicals both in industrial countries and agriculture, as well as the ease of travel from region to region and continent to continent, making the transfer of a pathogen or pathogens from one part of the world to another much easier than ever before. This pandemic includes more than 80 autoimmune disorders and increases in both the incidence and prevalence of autoimmune disorders such as Crohn’s disease, rheumatoid arthritis, multiple sclerosis, and type I diabetes.

The National Institutes of Health (NIH) estimates that 23.5 million Americans have an autoimmune disease. In contrast, cancer affects 13 million Americans. This relationship between these two categories is also seen in the UK and Europe.

At the end of this day the aims are:

To appreciate that auto-immunity has risen to the number one leading cause of mortality and morbidity in the world. To learn more about the role of dysbiosis within the body that may cause development of auto-immune illness. To explore the role of dysbiosis in patients with a variety of auto-immune conditions. To learn about the nutritional intervention required to achieve positive outcomes for patients. Finally, this presentation will consolidate the information shared in two previous seminars on autoimmune conditions.

The impact of the gut microbiota on immune homeostasis within the gut and, importantly, also at systemic sites has gained tremendous research interest over the last few years. The intestinal microbiota is an integral component of a fascinating ecosystem that interacts with and benefits its host on several complex levels to achieve a mutualistic relationship. Host-microbial homeostasis involves appropriate immune regulation within the gut mucosa to maintain a healthy gut while preventing uncontrolled immune responses against the beneficial commensal microbiota potentially leading to chronic inflammatory bowel diseases (IBD). Furthermore, recent studies suggest that the microbiota composition might impact on the susceptibility to immune-mediated disorders such as autoimmunity and allergy. Understanding how the microbiota modulates susceptibility to these diseases and their modification through the selection or exclusion of foods is an important step toward better prevention or treatment options for such diseases.

The gut microbiota can be influenced by several factors: the motility of the gastrointestinal tract (GIT); the intake of pharmaceutical medications, including antacids, antibiotics, and non-steroidal anti-inflammatory drugs; smoking; the use of alcohol; the GIT transit time; mucosal blood flow; and renal clearance. These factors can lead to the uptake of antigens from the lumen, which play an important role in the pathogenesis of gastrointestinal disorders. The disproportionate uptake of these antigens, coupled with the suppression of immune responsiveness or the failure in immunological tolerance, can lead to immunological reactions both within the gut and in other organs.

The diet of humans has changed dramatically since the Second World War, especially in industrialised countries and in urban areas. For thousands of generations, humans ate food shortly after harvesting and when it was in season. Meat was occasionally consumed and much of it was caught in the wild. In the past 50 or so years, our foods have undergone a considerable transformation.We have developed new strains of grains, especially in wheat, rice, soy, and corn. We use chemicals such as pesticides, fungicides, and insecticides for other crops such as fruits and vegetables; we inject dairy cows with hormones passing them on into dairy products; antibiotics, heavy metals, such as arsenic, and hormones are used in concentrated animal feeding operations (CAFO’s) which include cattle, hogs, turkey, and chicken; we have chemical ingredients in our foods such as artificial preservatives, colourings, and flavourings; we use artificial sweeteners abundantly, especially in soft drinks; we consume more than twice the amount of salt that we should. These and other changes to our environment and food, are sometime difficult to apply a causal relation ship, but increasingly researchers are seeing that the collective experience is stressing peoples capabilities to maintain immune tolerance, and depending on inherited risk and type of exposure this can lead to initiation and excaggeration of complex illness, including autoimmune conditions.

The Human Exposome Project is starting to pull together teams of scientist from different research centres to try to uncouple some of these risk and ultimately assist with recommendations to limit exposure. However dietary changes could explain 57% of the total structural variation in gut microbiota whereas changes in genetics accounted for no more than 12%. Brown K, DeCoffe D, Molcan E, Gibson DL Diet-induced dysbiosis of the intestinal microbiota and the effects on immunity and disease. Nutrients. 2012 Aug;4(8):1095-119. Epub 2012 Aug 21. http://www.ncbi.nlm.nih.gov/pmc/articles/PMC3448089/