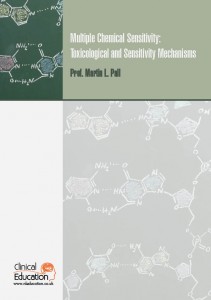 Prof Martin Pall of Washington State University has been exploring the biochmical mechanisms behind the complex illness known as Multiple Chemical Sensitivity.

He states: Cases of multiple chemical sensitivity (MCS) are reported to be initiated by seven classes of chemicals. Each of the seven acts along a specific pathway, indirectly producing increases in NMDA (A brain receptor activated by the amino acid glutamate, which when excessively stimulated may cause cognitive defects. Also called N-methyl-d-aspartate receptor.) activity in the mammalian body. Members of each of these seven classes have their toxicant responses lowered by NMDA antagonists, showing that the NMDA response is important for the toxic actions of these chemicals. The role of these chemicals acting as toxicants, in initiating cases of MCS has been confirmed by genetic evidence showing that six genes that influence the metabolism of these chemicals, all influence susceptibility to MCS. It is likely that chemicals act along these same pathways, leading to increased NMDA activity when they trigger sensitivity responses in MCS patients.