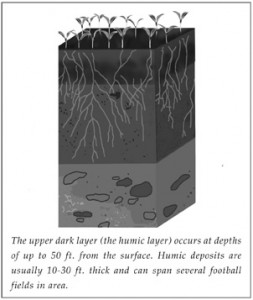 The term was coined ca. 1761 by Wallerius and refers to naturally-occurring soil deposits of composted organic matter.

Sanskrit texts over 3,000 years old refer to shilajit, the “destroyer of weakness.” (Shilajit is a Sanskrit word meaning “rock-invincible”.) Naturally-occurring crude shilajit is a petroleum-based material that is thick, sticky and tar-like. When extracted and purified, it is transformed into a brown-black, bitter paste that has been reported to contain numerous minerals as well as humic and fulvic acid. It has likely been used in Ayurvedic medicine for thousands of years.

While documentation is scarce, humic acid has probably also been used in Traditional Chinese Medicine (TCM) for many centuries. A 16th Century Chinese physician, Li Shih-chen, described over sixty uses for humic-containing natural products such as clays and muds.

The first western scientific study of humic acid appears to be that published by F.K. Achard in 1786.[1] He divided samples of a peat deposit into layers, by depth, and then undertook various physicochemical tests on each:

“10th Test. I poured a solution of caustic… over 2 ounces of peat which turned a very dark brown from this [due to extracted humic acid–ed.].
“11th Test. I saturated the extract of the peat obtained in the former test with vitriolic acid. The mixture turned cloudy and a dark brown nearly black sediment settled at the bottom [precipitated humic acid–ed.].”

Pioneering comprehensive studies of humic acids extracted with alkali from soil were also carried out by C. Sprengel in the early 1800s (Chemie für Landwirthe, Forstmänner und Cameralisten, Göttingen, 1832). His methods are still in use today.

Humic acid essentially neutralises a virus’s chemical “stickiness”. Doing so in turn prevents the virus from reproducing since it can no longer attach (“fuse”) to the surface of a host cell.

In modern times, humic acid has been exhaustively tested and found to be safe for use with animals. “Their simple administration (via feed), exceptional safety, and the absence of side effects…support the broad application of these substances in veterinary medicine.”[2] Clinical toxicity studies conducted on rats and rabbits established that peat-derived humic acid is well tolerated, and does not give rise to hematologic abnormalities nor kidney or liver malfunctions.[3]

A 1993 double-blind study found that humic acid was effective in treating recurrent respiratory tract infections. Thirty-nine patients aged 16-22 were given either humic acid or a placebo for three weeks, and followed up for three months. Humic acid was not only found to be effective, its therapeutic benefit extended past a six-month follow-up period. “The results suggest that humic acid is an effective medicament for the treatment of recurrent respiratory tract infections.”[4]

Humic acid was shown to be efficacious against herpes viruses in vitro.[5]

Several studies found that humic acid derivatives inhibit HIV-1 infection of cells in vitro. “Infectivity inhibition was due to interference with CD4 binding…no viral resistance…developed over a 12-week period in vitro.”[6] In another study, humic acid combined with AZT in vitro intensified antiviral potency 30-100 times.[7]

Humic acid binds so strongly to viruses that it can actually displace them from a cell surface to which they are already attached.

A study of humic acid found that it increased the proliferative response of specific human lymphocytes. The response was particularly striking in lymphocytes from HIV-infected patients. An increased production of IL-2 occurred at the same time.[8]

Humic acid absorbs deadly mould toxin, aflatoxin-B, in broiler chickens exposed through their feed. A total of 420 birds were assigned to 28 pens and exposed to differing amounts of mould toxin and oxihumate. Oxihumate was effective in diminishing the adverse effects caused by aflatoxin on weight, and “…showed protective effects against liver damage, stomach and heart enlargement, as well as some of the haematological and serum biochemical changes associated with aflatoxin toxicity.”[10]

Humic acid was found to capture free radicals, and rearm the body’s antioxidant defence mechanisms. It was concluded that these substances show considerable promise as immunity enhancing agents.[11]

[4] Jankowski A, Nienartowicz B, Polanska B, and Lewandowicz-Uszynska A. A Randomized, Double-Blind Study of the Efficacy of Tolpa Torf Preparation (TTP) in the Treatment of Recurrent Respiratory Tract Infections. Arch. Immunol. Ther. Exp. (Warsz) 1993, Vol. 41(1), pp 95-97