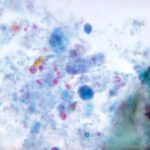 Dientamoeba Fragilis is it Really a Problem

First, some background to this parasite and a brief discussion of what may be used pharmaceutically and then a review of how a non-drug approach may be applied through the understanding of the mechanisms employed by the organism and its relative susceptibility to eradication strategies.

Dientamoeba fragilis (D. fragilis)is a trichomonad (a genus of anaerobic protists that are parasites of vertebrates) parasite found in the gastrointestinal tract of humans and implicated as a cause of gastrointestinal disease. D. fragilis has been found in most parts of the world in both rural and cosmopolitan areas. Infection with D. fragilis is called Dientamoebiasis and is associated variously with symptoms of abdominal pain, diarrhoea, weight loss, and fever.[1]

Ever since its first description in 1918, D. fragilis has struggled to gain recognition as a significant pathogen. There is little justification for this neglect, however, since there exists a growing body of case reports from numerous countries around the world that have linked this protozoal parasite to numerous clinical manifestations. A number of studies have even incriminated D. fragilis as a cause of irritable bowel syndrome,[2] allergic colitis,[3] and diarrhoea in human immunodeficiency virus patients. As it is often found in people with other co infections there has been some on-going doubt about its validity as a pathogen.

In part this is reinforced by the fact colonisation may occur without development of disease. In adults, asymptomatic colonisation is present in 75-85% of individuals affected by the parasite. In children, the opposite is true; disease develops in as many as 90% of those colonised.

However, numerous reports from many different parts of the world continued to substantiate the association of D. fragilis with clinical symptoms.[4]

Adults may experience one or more of the following, in children, pain varies with regards to location, duration, and character.

Other GI complaints include the following:

Non-intestinal complaints include the following:

A North American study in 2006, stated: “The prevalence of D. fragilis would surprise most clinicians. A review of stool-examination reports at the Cadham Provincial Laboratory in Winnipeg, which handles 80%–90% of stool examinations for parasites done in Manitoba, revealed that the incidence of this parasite was second only to Blastocystis hominis and far in excess of more commonly incriminated parasites such as Giardia lamblia/intestinalis, Entamoeba histolytica/dispar and Cryptosporidium parvum. Coinfection with B. hominis and D. fragilis was also common.” [5]

A high prevalence of D.fragilis has been reported in faecal samples collected from patients attending complementary medicine practitioners in the UK. Specimens were collected directly after passing into sodium acetate-acetic acid-formalin (SAF).

D. fragilis infections as mentioned above are often associated with other intestinal parasites. Ayadi and Barri investigated 1,497 confirmed D. fragilis cases and found coinfections with

..of the cases; respectively. This high coincidence of infection with other organisms that are transmitted via the faecal-oral route suggests the possibility of a similar mode of transmission for D. fragilis.[7] In children particularly consider the co-existance of pin worms (E. vermicularis), these can checked for using the sellotape test:

Place sellotape over the anus of the child before retiring to bed and in the morning see if worms have become attached. These will need treatment as well

Mechanism of action varies with the drug class but may include the following:

Though there remains some questions about whether these therapies directly target the pathogen or disrupt the bacterial colonies supporting its existence. This pathogen appears only, as with most, to be able to colonise a GI tract to the point of being symptomatic by co-existing with dysbiotic changes to the microbiota.

However, there is no general consensus on what is best practice in treating D. fragilis infections. There are also no data available on the mechanisms of immunity for this parasite.

Side effects have also been reported for other therapeutic agents used to treat D. fragilis infections. Transient liver function abnormalities were observed in several patients treated with Diphetarsone . Tetracycline has limited usefulness in children because of its well-established deleterious effect on dental development. Presently, Iodoquinol and Tetracycline are the most commonly employed medications, but a recent study found the antiaomebic drug Secnidazole to be highly effective. D. fragilis was eradicated in 34 of 35 patients after receiving a single dose of Secnidazole. A second dose was required only for one patient.[8],[9]

The successful eradication of D.fragilis will not occur with either therapy on a consistent basis, that is drugs and natural therapies have a high failure rate. In part this is due to the poor understanding of the organisms requirements for existence and partly because it seems to develop a very good tolerance to medicines and natural agents.

This resistance to eradication may be a reflection of the altered microbial communities as suggested by frequent co-infection and a broad spectrum of intervention/eradication strategies as well as a nutritive strategy and bacterial re-colonisation support may not only improve eradication but also reduce post treatment complications.

In children the need for successful management of this organism is just as important but requires care in the selection of medicines and or non drug treatment.

Regardless of the eradication therapy chosen – this first intervention recommendation is suggested as a suitable method of managing ecology needs in the small and principle place of residence – the large intestine.

Consider these options for eradication

Control measures to limit spread of parasites include the following:

Due to the high frequency of coinfection with B.hominis, a joint strategy for the treatment of both parasites along with suitable innate defence support is recommended. I have written about B.hominis in a previous post.