Antibiotics; How Do They Work?

Nutritional orientated practitioners are well aware of the potentially damaging effects of inappropriate prescribing of antibiotics, not simply in terms of increasing resistance but also because even a single treatment can alter the microbial ecology in the gut for months without relevant interventions.

Antiobiotics have undoubtedly been a fantastic intervention, the discovery of the sulfa drugs in the 1930 s and the subsequent development of penicillin during World War II ushered in a new era in the treatment of infectious diseases. Infections that were common causes of death and disease in the pre-antibiotic era – rheumatic fever, syphilis, cellulitis and bacterial pneumonia – became treatable, and over the next 20 years most of the classes of antibiotics that find clinical use today were discovered and changed medicine in a profound way.[i]

Antibiotics, though, are unique among drugs in that their use precipitates their obsolescence. Paradoxically, these cures select for organisms that can evade them, fueling an arms race between microbes, clinicians and drug discoverers.

So How do They work?

These bacterial targets are different or nonexistent in eukaryotic cells (including those of humans) meaning that whilst they have many possible side effects they have a relatively low level of toxicity. 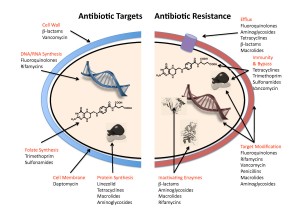 Antibiotics, effects and mechanisms of resistance

Antibiotic resistance is a natural phenomenon. It has been recognised for decades that the resistance mechanisms that have emerged in the clinic parallel those that are intrinsic to the bacteria that produce antibiotics. Recent studies of non-pathogenic soil bacteria have revealed that the majority of environmental bacteria tested are multi-drug resistant. This reflects the fact that these microbes live and have evolved in an environment where small bioactive molecules, some toxic, some benign, are plentiful and diverse.

Antibiotics themselves are the source of the evolutionary pressure that eventually renders them obsolete. Limiting exposure of microbes to antibiotics therefore makes good sense to reduce the opportunity for the selection and dissemination of resistance.

In order for us to make inroads into the challenging world of antimicrobial mechanisms using natural agents – that is agents that have not been chemically modified and produced as a parallel synthesis – we need to understand how antibiotics, most of which are derived from natural organisms work so that we may further discover the potential for valid natural therapies.

Combinational chemistry practised by nature is much more sophisticated than that which is produced in the laboratory providing a treasure chest of potential range of ‘natural’ products estimated to be in the region of 500,000.[ii] By 2001 just 160,000 have been identified[iii] and are growing at a rate of 10,000 per year.[iv]

3 Responses to “Antibiotics; How Do They Work?”