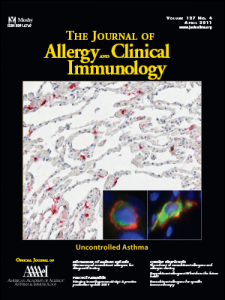 Many people suffer from an allergy to cow’s milk and other common foods, and whilst avoidance of the trigger has long been seen as the gold standard of management an evolving mechanism for treatment is being developed using oral tolerance triggers to restore food exposure competence.

Studies in several clinical trials in allergen-sublingual immunotherapy (SIT) have demonstrated that the induction of a tolerant state against allergens in many ways represents a key step in the development of a healthy immune response against allergens. Several cellular and molecular mechanisms have been demonstrated: allergen-specific suppressive capacities of both inducible subsets of CD4(+) CD25(+) forkhead box P3(+) T-regulatory and IL-10-secreting type 1 T-regulatory cells increase in peripheral blood; suppression of eosinophils, mast cells, and basophils; Antibody isotype change from IgE to IgG4.[1]

What is oral tolerance?

Oral tolerance can be defined as the antigen-specific suppression of cellular or humoral immune responses following previous oral exposure to the antigen.[2],[3] This hyporesponsiveness likely evolved as an analogue of self-tolerance to prevent hypersensitivity reactions to food proteins and bacterial antigens present in the commensal flora. Food hypersensitivity can thus be considered a failure in establishing oral tolerance or a breakdown in existing tolerance.

What the baked food bit all about?

In a poster presentation at the American Academy of Allergy, Asthma and Immunology (AAAAI) 2011 Annual Meeting in April 2011, scientists and clinicians have noted an interesting relationship between the safe ingestion of baked goods containing milk proteins and eventual recovery from milk allergy. This work has also been peer reviewed and is published in the Journal of allergy and clinical immunology.[4]

One of the team; Hugh Sampson, MD, professor of paediatrics and dean for translational biomedical sciences at the Mount Sinai School of Medicine in New York City states:

After 3 years of follow-up, we’ve found that children who are able to tolerate baked milk products are much more likely to develop complete tolerance to milk products.

What did they look at?

During the study, in which children were followed-up for a median of 31 months, patients who demonstrated tolerance to heated milk in the form of muffins or waffles (not recommended daily food fare but commonly eaten!) underwent sequential challenges to foods such as pizza, macaroni and cheese, and unheated milk. Immunologic parameters such as skin prick tests and milk-specific immunoglobulin E levels were measured regularly. Only 9 of these children (13%) later chose to avoid all forms of milk.

If children could initially tolerate the baked form of milk, they were 16 times more likely to develop complete tolerance than an age-matched control group. In these children, the median time to unheated milk tolerance was 21 months.

Although children in the group who were initially tolerant to baked milk products were regularly eating these products, only 2 developed serious symptoms — 1 was diagnosed with ulcerative colitis, and another with eosinophilic esophagitis. In the group of children who were initially reactive to baked milk products, 1 developed eosinophilic esophagitis.

Among the 75 children who regularly incorporated heated milk products into their diets, milk skin prick test wheal sizes decreased substantially (from a mean of 8 mm to 6.7 mm; P = .0001), although milk-specific immunoglobulin E levels did not change significantly.

Interventions to desensitise children to food allergens by gradually exposing them to the foods that cause symptoms have become a hot topic for research among allergists.[5] One such approach is generously named the ‘Oral rush desensitisation’ approach which is all about desensitising an individual in a few days rather than the months currently under exploration and has certainly brought a new idea to the fore, at least in terms of egg allergy resolution.[6]

The baked goods idea operates as a type of oral immunotherapy (or gradually increasing doses of the foods), and other strategies include sublingual tablets containing tiny doses of the allergen.

These studies have very small numbers, actual doses, timings and adjuvants such as bacteria (probiotics) are yet to be really identified, but they fit with the notion that suitable antigen presenting cell (Dendritic Cells) maturation in the gut can confer immunosuppression to tissues far removed from this site.

Yet data are beginning to accumulate on the desensitisation approach to a range of food allergies, including allergies to peanuts, milk, and eggs. Using baked forms of a food allergen as a way to desensitise patients has proven promising for egg allergies as well, regularly putting baked forms of a food into an allergic person’s diet may be a useful way to bring about tolerance.[7]

The development of treatments for patients who have, or are at risk for, food allergy critically depends on understanding oral tolerance induction. On going food allergy clinical trials are currently targeting oral and mucosal forms of tolerance using immunotherapy with aqueous, powdered, and heat-denatured proteins. Most of these trials include immunologic as well as clinical analyses, in an effort to better understand the mechanism of human oral tolerance. Intestinal APCs and T regs are likely to be central to this mechanism, although many unanswered questions remain. Key factors such as retinoic acid are emerging as critical functional regulators, which represent important potential targets for future immunotherapeutic approaches to tolerance induction in food allergy.

One Response to “Tolerance of baked goods containing milk is good prognostic indicator.”