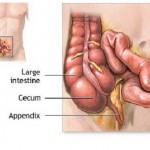 The Appendix – Why We Need It 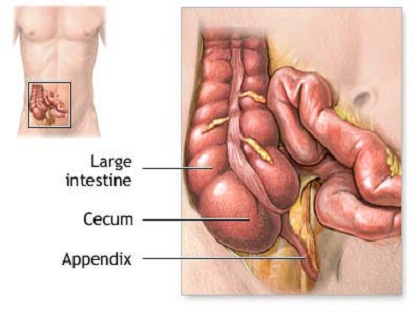 The term vestigial organ is used to describe tissues that are typically in a degenerate, atrophied, or rudimentary condition, and the appendix has long been characterised as such a tissue. The work of Dr’s William Parker and Randall Bollinger have raised a number of interesting observations that indicate this tissue should be given an updated and relevant title.

To coin a phrase it is a ‘reservoir of dogs bacteria’, providing a safe repository or bank of bacterial species able to re-colonise in the event of a traumatic disruption of the microbial mix, such as that experienced after diahorrea or antibiotic use.[1]

The appendix is a slender pouch located near the juncture of the large and small intestines. While its exact function in humans has been debated by physicians, it is known that there is immune system tissue in the appendix.

The human vermiform (“worm-like”) appendix is 5-10cm long and 0.5-1cm wide and extends from the cecum of the large bowel. The architecture of the human appendix is relatively unique among mammals. However, the appendix is actually quite widespread in nature, more than 70 % of all primate and rodent groups contain species with an appendix

The incidence of appendicitis shows the trend of being associated with modern hygiene and medicine. The caecal appendix may thus be viewed as a part of the immune system that, like those immune compartments that cause allergy, is vital to life in a “natural” environment, but which is poorly suited to post-industrialised societies.[2]

Appendicitis, or inflammation of the appendix, is not due to a faulty appendix, but rather due to cultural changes associated with industrialised society and improved sanitation.

“Those changes left our immune systems with too little work and too much time their hands – a recipe for trouble.”

The appendix is thought to have some immune function based on its association with substantial lymphatic tissue, although the specific nature of that putative function is unknown. Its role is becoming better understood based;

Other consequences of appendectomies

An example of the consequence of the removal of appendix on the overall health of the colon, is the increased incidence of developing the inflammatory bowel disease called Crohn’s Disease (CD) shortly after a resection of the appendix.[4]

Albeit that there appears to be an inverse relationship between appendectomy and ulcerative colitis.[5] Perhaps this has something to do with the determination of the main effector T cells as CD is linked to Th2 expansion and UC to Th2 expansion

Appendicitis may be mediated by Th1 effector cells and so mitigate the risk for UC, albeit that the expansion of Treg cells may be related to the type of inflammation that precedes the appendectomy and confer benefits or risk accordingly.  Alternatively, it may be that early CD is misdiagnosed as appendicitis.

As with much of our historical opinions regarding the role of the gut in terms of human health, modern scientists are re-examining some of the long held views in light of improved analysis and comprehension of the bacteria and the immune system in the gut. The increased incidence of allergies and decline in acute appendicitis admissions in the UK and Europe may suggest that this relationship is controversial, but between 7% and 9% of the population is likely to suffer at some point from appendicitis.[6] Estimates for allergy vary, but may be equivalent in percentage terms.

What does this mean in terms of nutritional therapy? The appendix is unlikely to be a primary target for nutritional intervention, but epidemiological data suggests that diet high in fibre favours short chain fatty acids, promotes bacterial health and may well provide mild stimulation due to the bacterial diversity of the mucosal immune system so reducing the risk of appendicitis, and promoting its role as a safe haven for our commensals.