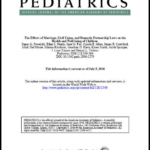 Many parents and clinicians are looking for clues often of a wild and speculative format to explain why their child may have developed autism, for whilst there appear to be a number of genes involved in autism, the genetic cause has yet to be convincingly supported, suggesting that there remains an environmental factor that influences an epigentic change that allows for relevant genes to be expressed.

A paper published in the journal Pediatrics[1] suggests a possible relationship between a clinically recognised early life condition and the development of ASD suggesting that this sensitive window – if exposed to the described neurological insult can act as an epigenetic activator with long term consequences.  In addition to the local neurological interaction, this study also pulled a large amount of data from Danish birth records and found two risk mitigators:

If the mother was primiparous (a woman who has given birth only once) and the birth dates were in between April and September – the risk of autism declined dramatically.

So what did they find: The researchers uncovered a complex interplay between endogenous liver function, frequency of pregnancy and time of conception/birth.

This paper looked at Jaundiced newborns  (caused by hyperbilirubinemia – increased levels of bilirubin in the blood) and found they had a remarkably close to 90% higher likelihood of subsequently having any psychological developmental disorder compared with comparable neonates without jaundice (HR 1.87, 95% CI 1.58 to 2.21, P=0.001)

Once these figures were looked at more closely they were able to further extract that those born at term with jaundice had a 56% greater risk of the specific diagnosis of pervasive developmental disorder — a disorder on the autism spectrum — than those without jaundice (HR 1.56, 95% CI 1.05 to 2.30, P=0.028),

Exposure to high levels of bilirubin is neurotoxic in very young children and can be fatal or associated with permanent sequelae.

Recent research also has suggested that even moderate bilirubin exposure in very young children can be harmful, possibly leading to impairments in their development especially hearing or cause permanent neurologic sequelae (kernicterus).

In an earlier case-control study, Maimburg and colleagues found a nearly fourfold increased risk of autism among children who had neonatal jaundice.[2]

Additional data was collected to see if there may be other contributory factors. A population based study in Denmark that included all 733,826 children born in that country between 1994 and 2004, was undertaken using data from the Danish Medical Birth Register.

A total of 35,766 children from this group had been diagnosed with neonatal jaundice, while 1,721 were given a diagnosis of a disorder of psychological development during childhood.

After stratification for term versus preterm birth, and adjustment for factors such as maternal smoking, birth weight, and gender, the association of neonatal jaundice and any disorder of psychological development was statistically significant for infants born at term (HR 1.29, 95% CI 1.06 to 1.56, P=0.011), the researchers reported.

The difference in risk for term and preterm children might suggest that brain development undergoes a sensitive period with special vulnerability to bilirubin exposure at ~40 weeks of gestation.

Another possible explanation for the difference in risk between term and preterm infants is that those born before 37 weeks routinely are hospitalised, so the bilirubinemia would be detected and treated promptly.

What about birth dates

Further analysis of children born at term and exposed to bilirubin found other specific factors linked to autism:

Birth during the winter months, according to the researchers, may influence the development of neonatal jaundice because exposure to daylight helps decrease bilirubin levels.

These results may reflect the different exposures to daylight but also the fact that children born in the winter period are more exposed to other contributing agents, such as infections.

What about primiparous issues

And as to why primiparous women were less likely to have jaundiced infants, possible reasons include their lower levels of antibodies and the fact that firstborn children in Denmark typically remain in the hospital for several days, and hyperbilirubinemia would be detected more quickly.

The researchers noted that their results may have been underestimated, because the data on neonatal jaundice were obtained from the Danish National Hospital Register and reflect only the severest cases.

The clinical issue for most practitioners will be related to the case history – was the individual jaundiced and for how long. This is of interest for the Nutritional Therapist, not because we can now say this is a causal factor but because we can include it as a risk realted factor that may in due time present us with a remedial approach.

What can one do in terms of the mother – well family planning may now have to include seasonal variations to time the arrival date to co-incide with adequate sunlight exposure or at least recognition that jaundice is a condition with significant long term risks. Maybe the suggestion that additional immune insults such as vaccination should be held back until the jaudice has been resolved will be considered as a proportional strategy.

There are serious implications in this study, suggesting that there may be a window of time in which brain barrier penetration by bilirubin can push an at risk neonate into a future in which neurodevelopmental issues complicate their lives. This suggests that mothers as well as the relevant medical staff need to act quickly and decisively on managemnt of jaundice – one of the first clinical signs being that of yellowed scelra in the eyes.