Reap What You Sow- Grain Reliance 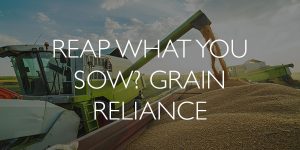 There is a global reliance on rice, maize and wheat as a food source, together they comprise nearly 50% of total calorie consumption.  Without these crops’ food shortages and some issues of malnutrition would be even wider spread. Despite the obvious positives there are many issues associated with this over reliance.

To continually harvest the same crop on the same land will deplete nutrients in the soil, leading to a quicker build-up of pests and #diseases in turn increasing the need to use fertilisers and pesticides. The cultivation of a single crop in one area, a #monoculture, can cause a limit to the healthy function’s nature can bring to the soil. A lower fallow period results in reduced livestock grazing, again reducing valuable nutrients for the soil and future crops produced, as well as preventing carbon sequestration, the natural process whereby carbon dioxide is removed from the atmosphere. Continuous #cropping also causes the land to dry out, inducing higher temperatures and lower humidity, amplifying the effects of #climate change.

With annual crop production comes dryland salinity, with water tables rising due to these crops limited root system and water dependency timescale. Repairing the salinity of soil is costly and does not guarantee future sustainability of the soil. The use of nitrogen #fertiliser to increase the crop yields is also increasing soil acidity, a major environmental and economic concern.  Acidic soils cause significant losses in production with reduced plant growth and nutritive content.

The increased need for pesticides has led to a rise in agrochemical companies and a reliance on them by farmers, reducing their sovereignty while increasing their debt. One of the most widely used agrochemicals, #glyphosate, impairs long term productivity by seemingly killing soil microbes, as well as contaminating waterways.  Worryingly it has also been shown to cause birth defects and tumour growth in amphibians and mammals. It is also under review in the USA as a causative agent for leukaemia.

This dependency on three primary crops has led to severe biodiversity loss, once again compromising agricultural productivity. This combined with increased Co2 induced plant generated sugars, reduced protein and micronutrients can also be problematic when relying on fewer crops. This deficiency in iron, zinc, selenium and magnesium can cause us a variety of health problems. #Obesity is another risk issue with a lack of plant diversity in our diets. Sustainable food supplies are crucial for future prosperity, with thousands of edible plants available it is vital that we look to broaden our diets as much as possible to reap the benefits in both our health and the health of the planet as a whole.