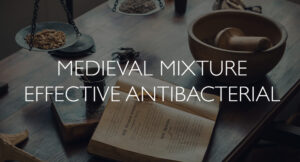 Infections associated with #biofilms are notoriously difficult to treat and play a large role in #antibiotic resistance, a significant emerging health problem. It is estimated that Antimicrobial resistance will kill 10 million people per year by 2050. Scientists from Warwick University have recognised the need for new #antimicrobials to fight antibiotic resistance and have had their work published in the Nature Journal in July 2020. In conjunction with medievalists the team of microbiologists, chemists, pharmacists, and data analysts recreated a 1000-year-old medicinal preparation called Bald’s eye salve using extracts of “onion, garlic, wine, and bile salts” and found it to have strong antibacterial activity.

Biofilms are membranes produced by microbes to colonise surfaces, they protect bacteria from the body’s immune system and increase their resistance to antibiotics, making them hard to treat. As an example, the biofilms that infect diabetic foot ulcers have proven incredibly hard to treat leading to amputations to avoid the risk of the bacteria spreading to the blood. The team from Warwick found that the Bald’s eye salve remedy was effective against a range of #Gram-negative and #Gram-positive #wound #pathogens in #planktonic culture. Crucially this activity was found to be maintained against the following five pathogens grown as biofilms:

Bald’s eye salve came from Bald’s Leechbook, which is widely known as one of the earliest medical textbooks. The mixture has not caused harm to human cells in the lab or to mice so offers hope as an effective treatment. As part of their conclusion the research team stress the importance of considering not just single components when looking for new plant-based antibiotics but to instead study the effects from using a combination of ingredients. Each ingredient of Bald’s eye salve had known antimicrobial properties or compounds, with garlic showing strong planktonic activity. In the more clinically relevant setting against S. aureus Newman biofilms, grown in a synthetic wound model, there was only anti-biofilm activity when the mixture of all four ingredients were used.