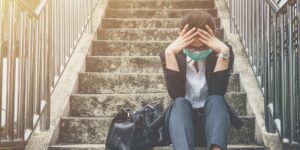 Happiness is easy to explain by its absence but less easy to define as a concept. The Greek philosopher Aristotle (384-322 B.C.) penned what is perhaps the most concise (6 word) definition: “Happiness is a state of activity.” And whilst very simple, it is linked to multiple factors centered around physical and mental well-being, purpose, family and friendships.

Yet many, possibly even you, are unable to attain and sustain a state of happiness in life. Ever more people are experiencing this absence during the extended period of managing the consequences of a mutating virus. A mutation is a genetic change; a variant is a virus with a specific set of mutations. That Sars-Cov-2 mutations have evolved three times (that we know of to date), in variants with unusual behaviour, suggests that they confer an evolutionary advantage to the virus. Our continued immune resilience and flexibility is key to our survival and emotional and mental wellbeing, as both affect our immune capability.

It has been proposed that most of the serious approaches to happiness can be mapped onto two ancient traditions, promoted by two other Greek philosophers Epicurus (the Epicureans) and Epictetus (the Stoics). In summary, they focus on enjoyment and virtue, respectively.

People gravitate toward one style or the other and there appears to be a genetic element that contributes almost 50% determination of which type you will favour. Major philosophies have espoused one path or the other for over two millennia!

Understanding where you or your client sits between the two can tell you a great deal, including any happiness weak points, and can help you develop strategies for a more balanced approach to life and gain related health benefits.

Whether Epicurean or Stoic in character, the ‘inner drive’ on exposure to challenge is to double down on what comes naturally to us. But that is the road to excess, which ultimately leads us away from well-being.

Answering the question about where you find yourself gravitating starts with a simple but honest answer to this question: When my mood is low, do I naturally look to increase my level of pleasure and enjoyment, or do I focus on meaning and purpose in my life? The former is a sign that you tend toward being an Epicurean, the latter that you are more of a Stoic.

Naturally, which of these is the best for happiness has been explored for centuries, but they largely talk past one another. In life, each pursues different aspects of happiness: Epicurus’s style brings pleasure and enjoyment; Epictetus’s method delivers meaning and purpose.

As happiness scholars note, a positive blend of these is most likely to deliver a secure and happy life. Too much of one, a life of trivial enjoyment or one of grim determination, will in most cases not produce a life well-lived, embedded with happiness, valued purpose and contentment.

WHERE DOES DISTRACTION FIT IN?

Sars-Cov-2 has been a massive, globalised distraction. Aspects of life and life itself have been lost to the virus and allied information, and the anxiety, fear, worry, disdain and frustration associated with the migration of its effects has also taken its toll. This state of being is made worse by the desire for political capital and the economic impact on peoples’ lives.

The subsequent generation of a wide range of plausible and implausible theories and conspiracies that have found a home in people’s consciousness comes at a cost that can be measured in a range of questionnaires developed by Penn University.

For each person that finds community in their narrative/theory/conspiracy of choice the related engagement may come at the cost of societal, and social separation, and an insipid depletion of hedonia; the desire and ability to feel joy and a related struggle to identify meaning and purpose. Whilst related paranoia/fear creeps into their minds, their consequences and in-actions can impact individuals well beyond their immediate connections.

Sars-Cov-2 and variants have created a perfect storm for conspiracy theorists. We have a global pandemic, a crashing economy, social isolation, pharma involvement, social media and restrictive government policies: All of these can cause feelings of extreme anxiety, powerlessness, and stress, which in turn encourage conspiracy beliefs.

Conspiracy theories are many things, but most of all, they are narratives. Understandable, comprehensive, relatable stories about how the world works, complete with the arcs and the rhythms of any other epic tale of heroes and villains.

Part of what makes certain ones endure is how well they unravel that story, which in most cases is a contemporised version of many similar successful versions that have gone before, from the ‘Protocols of the Elders of Zion’ and the ‘Foundations of the Nineteenth Century’ both highly popular, but deeply flawed proposals for example. It is easy to see the same old tropes in these books applied to most contemporary narratives and conspiracies.

An important essay published in 1964 based on a version of the Herbert Spencer Lecture delivered in Oxford in 1963 by the historian Richard Hofstadter captured core characteristics of the ‘mood, personality and narrative’ that can be observed in many of the more colourful propositions and their proponents. One paragraph states:

“Let us now abstract the basic elements of the paranoid style. The central image is that of a vast and sinister conspiracy, a gigantic and yet subtle machinery of influence set in motion to undermine and destroy a way of life… The paranoid spokesman sees the fate of this conspiracy in apocalyptic terms — he traffics in the birth and death of whole worlds, whole political orders, whole systems of human values. He is always manning the barricades of civilization. He constantly lives at a turning point: it is now or never in organizing resistance to the conspiracy. Time is forever running out.”

“We are all sufferers from history, but the paranoid is a double sufferer, since he is afflicted not only by the real world, with the rest of us, but by his fantasies as well.”

By which we can reflect on the nature of paranoia, compressing happiness and contributing to the rise of mental health issues. The engagement and embodiment of fringe, conservative, conspiratorial beliefs, offers many a sense of community, but ultimately at the cost of personal and societal wellbeing.

Any of us can fall for a lie. There is no guaranteed method of keeping ourselves safe, except to believe nothing at all, a corrosive cynicism which is even worse than gullibility. But a simple habit of mind can be helpful. When you are asked to believe something, a newspaper headline, a statistic, a claim on social media, stop for a moment and notice your own feeling and responses to these words. Are you feeling defensive, vindicated, angry, smug? Whatever the emotional reaction, take note of it. Having done so, you may be thinking more clearly already and be avoiding what is called motivated reasoning; thinking through a topic with the aim of reaching a particular pre-determined conclusion.

You see, words have never been what we were taught at school that they are. Words both written and spoken are once released like incredibly thin membranes that hold within them living meanings. And those membranes, like our own, are highly flexible. Human desire can place any kind of meaning within such membranes, then utilise what has been made to suit any purpose at all.

Distractions stop us from paying attention to what matters, and tribalism makes us reject evidence that casts our tribe in a bad light. Combine the two, add steroids and you get the third element of the age of ignorance: conspiracy thinking.

We should all slow down, calm down, ask questions and imagine that we may be wrong. It is simple advice, but much better than nothing. It is also advice that is all too easy to ignore and doing so frequently comes at the cost of declining mental and physical health.

What can we learn from current and prior catastrophes? It seems that people who see stressful events as ‘challenges,’ with an opportunity to evolve and adapt, tend to cope much better than those who focus more on the threatening aspects, like the possibility of failure, embarrassment, or illness. Meaning there is opportunity to develop resilience.

Individuals afflicted with depression and anxiety are often overwhelmed with ‘all-or-none’ and negative thinking. They have difficulties thinking positively and generating thoughts that can help them cope and develop solutions around their situation.

You can prompt yourself and clients to brainstorm positive thinking strategies and practice slowing the spiral of negative thinking by implementing the ‘Yes, But’ Technique.

This simple, no-cost, cognitive process involves using a three-to-one rule for yourself/clients/family who are struggling with negative thoughts. This means with every negative thought that occurs they are instructed to write down “Yes, But…” and come up with three positive coping thoughts that can help them feel better or at least less polarised. A three-to-one rule is beneficial and writing it down, rather than verbalising the coping thoughts is needed to overwrite problematic negative internal dialogue.

Naturally, cognition is a consequence of emotional and neural capability, and adding nutritional support to assist the process opens many options. Supportive nutritional, bacterial and botanical choices can complement all aspects of mental, physical and immune health.

One unique food supplement used for millennia and based on natural ingredients recognised for improved mental and physical fortitude from the time of our selected Greek philosophers and promoted by the Greek physician Galen is Garum, a fish substrate.

Whilst you may not be faced with the reality of a legionnaire’s life, for whom varieties of garum was a staple of all campaigns and engagements, you and others may well benefit from a modern standardised (Garum Amoricum) version of this long-favoured supplement for improved physical and mental endurance, resilience and recovery.

Stabilium contains a high concentration of small peptides like pituitary and hypothalamic stimulating peptides that act as hormone precursors and precursors to neurotransmitters such as gamma-aminobutyric acid (GABA), encephalins and endorphins. These can exert a regulatory effect on the nervous system, potentially enabling the body to adapt to stressful conditions.

Perhaps a combination, together with Aristotle’s maxim that ‘happiness is a state of activity’, can encourage a series of related actionable steps and discover that happiness is a type of activity that we strive for and ultimately attain throughout the entirety of our lives rather than just a feeling or state that we happen to have at any given moment.

One Response to “Happiness – Denied by Distraction – A Solution”