I have written a number of times about the role of faecal transplantation in the established intervention for Clostridium difficile and have hinted at the possible cross mechanism benefits of inducing commensal bacteria that favour tolerance into the gastrointestinal tract. The implication being, that individuals experiencing illness driven by loss of immunological tolerance, not simply within the digestive tract, but systemically may benefit from an evolutionary transplant.

Whilst there are practical considerations – there has been one small study on home administration[1] and numerous anecdotal discussions regarding its use in a wide range of illnesses, for which a recovery has been confirmed. 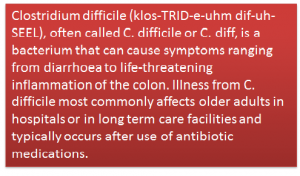 A recent study ( March 2012)  published in the journal Gastroenterology is one of the largest exploring Clostridium difficile patients and their outcomes following faecal transplantation.[2]

Patients who suffer from protracted Clostridium difficile colitis despite receiving oral antibiotic therapy, often for months, have become a challenge for physicians all over the world.

The investigators reviewed data from 70 adults (mean age, 73; 86% outpatients) who had received up to 12 courses of antibiotics for CDI; most had received 3 to 6 courses. Most stool donors were close relatives of the patient. Transplantations were performed using a uniform protocol, which involved bowel preparation with an oral polyethylene glycol solution, followed by an infusion of stool into the caecum via colonoscope.

No other C. difficile treatment achieves anything like the 94% eradication rate reported in this study, even in patients with relatively mild disease. Faecal transplantation would probably become the gold-standard treatment for CDI if the logistics of arranging it were not so daunting.

However, the discomfiture displayed by the physician is less of a problem for the ill patient – once the concept is fully understood and the application standardised – in as much as there is a preferred in hospital or at home methodology and pre transplant prep, then this therapy will be used more and more saving lives, money and families from unwanted misery and even death. Physician driven exclusion based on the ‘yuck’ factor is a poor and emotive based reason to avoid a compellingly safe and effective treatment.